By Justin Worland and Simon Lewis

A Greek air safety official says debris found in the Mediterranean after the crash of EgyptAir flight 804, which disappeared en route from Paris to Cairo with 66 people on board early Thursday, does not belong to the aircraft, reversing earlier statements from the airline.

“An assessment of the finds showed that they do not belong to an aircraft,” Athanassios Binis, head of Greece’s Air Accident Investigation and Aviation Safety Board, told state ERT TV according to the Associated Press.

EgyptAir previously released a statement Thursday saying the the Egyptian Ministry of Foreign Affairs had declared finding the wreckage of the flight near Karpathos Island in the Mediterranean Sea.

French President Francois Hollande said that the flight had crashed but the cause of the disaster had yet to be determined. The airline and Egyptian government officials said they had not yet determined what happened to the plane.

“We will draw conclusions when we have the truth about what happened,” said Hollande, according to the BBC. “Whether it was an accident, or whether it was—and it’s something that is on our minds—terrorism.”

The US Navy has dispatched a P-3 Orion long-range aircraft from Sicily to support the search. “US Commander Sixth Fleet is working with the Joint Rescue Co-ordination Centre in Greece and the US Defence Attache in Athens, Greece to provide US Navy P-3 Orion support in the search of the missing Egyptian aircraft,” the US navy said in a statement.

Greek defense officials said that within a two-minute period the plane made a 90-degree turn and dropped from 37,000 feet to 15,000 feet before making another 60 degree turn, according to a Guardian report. The plane then dropped to 10,000 feet before disappearing.

Reuters reports that Greek aircraft and naval vessels are participating in the search. French authorities have also offered assistance and have set up a crisis center at the French embassy in Cairo according to France 24.

A Greek defense ministry source told Reuters that authorities were investigating the sighting of a ‘flame in the sky’ by a merchant ship captain some 130 nautical miles south of the island of Karpathos. Agence France-Presse cited a Greek airport source saying the plane had crashed off the island.

Flight MS 804, which departed from Paris Charles de Gaulle Airport at 11:09 p.m. and was due to land in Cairo at 3:15 a.m. local time, “disappeared from radar” en route, according to EgyptAir’s official Twitter account.

The airline later said a distress signal had been received at 4:26 a.m., possibly transmitted from a tracking beacon on the plane after the crash, the Guardian reports.

Among the 66 on board the Airbus A320 are a child and two infants as well as three security personnel and seven cabin crew. EgyptAir has also posted a breakdown of the nationalities of passengers on the flight, including 30 Egyptians and 15 French passengers. It said that it was providing doctors and translators to passenger’s relatives and loved ones gathered at Cairo Airport.

Ahmed Abdel, vice-chairman of EgyptAir’s holding company, told CNN the pilot did not make a distress call, and authorities have so far given no indication that the plane — which was flying at 37,000 feet when it lost contact — was having technical trouble, leading to speculation it could have been the target of a terrorist attack.

However, “All causes for the disaster are open, whether it is a major technical fault or a terrorist action or any other circumstance,” an unnamed Egyptian aviation official told Reuters. The official said the cause “will be ascertained when we inspect the plane’s wreckage and transcribe its black boxes.”

Families of passengers who were flying in an EgyptAir plane that vanished from radar en route from Paris to Cairo wait outside a services hall at the airport in Cairo, May 19, 2016.
Khaled Desouki—AFP/Getty Images

David Newbery, a Hong Kong flight captain and accredited air accident investigator, told TIME that if the plane had suddenly disappeared from conventional, or primary, radar, it would suggest it had broken up while in the sky.

“If the primary radar just completely dropped off, it could be a catastrophic breakup of some kind,” Newberry said, insisting it was too early to say what could have caused the apparent crash. “It could be any number of things. There doesn’t appear to be bad weather over there.”

Airbus posted a statement to Facebook, confirming the crash of the plane. “The aircraft involved [was] delivered to Egyptair from the production line in November 2003,” it added. “The aircraft had accumulated approximately 48,000 flight hours. It was powered by IAE engines. At this time no further factual information is available.”

In October last year, a Russian Metrojet aircraft carrying 224 passengers exploded in mid-air over the northern Sinai desert after departing from Egypt’s Sharm el-Sheikh airport. The Islamic State of Iraq and Greater Syria claimed responsibility for the apparent bomb attack.

In another incident in March, an Egyptian man with a fake suicide vest hijacked a domestic Egyptian flight—also operated by EgyptAir—and forced the pilot to divert to Cyprus. It turned out the hijacker was hoping the stunt would help him to reunite with his estranged wife.

Write to Justin Worland at justin.worland@time.com and Simon Lewis at simon_daniel.lewis@timeasia.com. 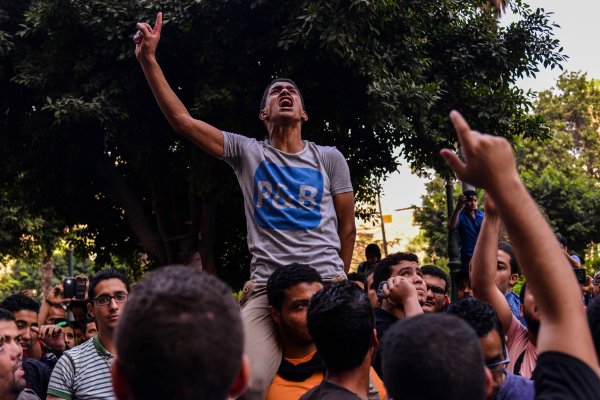 Egypt Clamps Down on Protests Over Red Sea Islands
Next Up: Editor's Pick