When Michelle Obama speaks on Thursday at the Santa Fe Indian School as this year’s commencement speaker, the First Lady will surely speak of the usual hopeful graduation-day themes, and about the White House Generation Indigenous Initiative that brought her there. Optimism about the future will have an extra layer of meaning in that particular location, as the school is part of a long and ignominious story from American history.

When the Santa Fe Indian School was established in 1890, its mission was not so much education as assimilation.

As James Wilson describes in his history of Native America, The Earth Shall Weep, the United States government realized in the mid-19th century that it would be impossible to just keep moving the Native American population to areas where there were no white settlers, as such areas were fast disappearing. Many believed that the only possible solutions were, as Wilson quotes Interior Secretary Alexander Stuart, “to civilize or exterminate them.” The option of “civilizing” was seen as the moral choice.

“When the U. S. Government first turned from shooting Indians to educating them, it hoped to accomplish their gradual assimilation in white communities,” TIME explained in 1936. “In 1879 General Richard Henry Pratt (who once proposed apportioning the Indians, like so many marbles, nine to each county in the U. S.) founded Carlisle School in Pennsylvania.” Carlisle inspired many other schools around the country, many of which were boarding institutions far from reservations, where children were sent to be purposefully removed from their families. The Santa Fe Indian School was built on the Carlisle model, as explained by the New Mexico Office of the State Historian, with a military model and a “jail” for those who misbehaved.

MORE: The Long History Behind Your Favorite Celebrity Commencement Speech

Pratt was considered a reformer at the time, Wilson writes, as he believed that Native Americans were inferior to white people because of their nurture, not nature—in other words, that they could be made acceptable to society if they were taken from their homes, separated from their cultures and encouraged to forget their language and religion. Graduation was not the end of the damage, as young men and women would return home having been taught that their families were savage.

In 1886, the Commission of Indian Affairs reported on the work being done at the schools. At the time, according to the report, there were more than 8,000 students in government Indian schools, including both day schools and boarding schools. Given the needs of the students, the report attested, boarding schools were best for “freeing the children…from the language and habits of their untutored and oftentimes savage parents.”

Day-school students were disadvantaged by being with their families, the report said, which put them in a state of “moral and mental stupor.” A sub-report by the superintendent of the schools drove home the point: “Only by complete isolation of the Indian child from his savage antecedents can he be satisfactorily educated, and the extra expense attendant thereon in more than compensated by the thoroughness.”

As Tsianina Lomawaima of the University of Arizona explained to NPR in 2008, the goal of the schools was to change the students’ “language, religion, family structure, economics, the way you make a living, the way you express emotion, everything.” More than one generation of students had passed through the schools, separated from their cultures and taken from their families, by the time the federal government acknowledged the tactic was harmful.

In 1926, the Secretary of the Interior requested a report from the Institute for Government Research on “the problem of Indian administration.” The resulting 1928 document, known as the Meriam Report, summed up the extreme extent to which the program wasn’t working. “The most fundamental need in Indian education is a change in point of view,” the report declared. Modern educational theory firmly rejected the idea that removing children from their homes was good for them—and the schools weren’t giving children a good education anyway.

As a start, the report recommended that non-reservation boarding schools should be limited to older children only, so that young children could stay with their families. TIME captured a poignant moment in 1927 when President Calvin Coolidge visited a South Dakota Indian school “where he asked the Superintendent if the little Indian girls did not get homesick sometimes.” It was during this period that the Santa Fe school introduced a painting program that produced several noted artists.

And yet, this change did not mean that the era of the Indian schools was over.

As late as 1950, TIME reported cheerfully on the opening of a new Indian school in Utah, and how its “wide-eyed and scared” Navajo students were brought in to learn how to speak English and use flush toilets. The schools did have slightly more progressive goals than those of the past: “Under the old system, the Indian getting out of school had an almost pathological desire to return to something that no longer existed,” said George Boyce of the Indian Service. “We are attempting to provide them with the skills to fit them into a modern mold.”

A 1969 Senate-authorized report on the “national tragedy” that was Indian education declared that its authors were “shocked” by what they had found: “Others before us were shocked. They recommended and made changes. Others after us will likely be shocked, too—despite our recommendations and efforts at reform. For there is so much to do—wrongs to right., omissions to fill, untruths to correct—that our own recommendations, concerned as they are with education alone, need supplementation across the whole board of Indian life.” The statistics in the report “mark a stain on our national conscience” and lead to the conclusion that “our national policies for educating American Indians are a failure of major proportions.”

Today, however, the Santa Fe Indian School represents pretty much the exact opposite of what such institutions once did. The school and the land on which it sits is now operated by the 19 Pueblo Governors of the state, with a goal of helping students maintain a link to their culture while thriving in the careers of their choice. 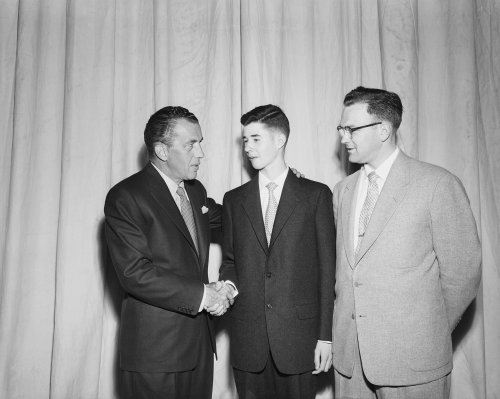 Past Winners of the Scripps National Spelling Bee: Where They Are Now
Next Up: Editor's Pick