Why Democrats Haven't Unified Yet

Bernie Sanders and Hillary Clinton split the primaries in Oregon and Kentucky Tuesday, as Clinton avoided going weeks without a victory. But as Clinton is set to secure the Democratic nomination on June 7, the rift in the party is deeper than ever.

Facing criticism over violence and threats from his supporters as last week’s Nevada GOP state convention, Sanders dodged press questions, before issuing a statement that appeared to justify his supporters’ actions, asserting that the process was rigged by Clinton supporters against his own backers. As Clinton and the DNC condemned their developments, the events were a cautionary signal to Democratic state parties across the country, and for the Democratic convention in Philadelphia that Sanders supporters remain deeply committed and won’t just fall in line once Clinton secures the requisite number of delegates. It’s the latest indication that Clinton, immersed in a two-front political battle, has yet to find a way to outreach to Sanders supporters other than stoking their fears about GOP presumptive nominee Donald Trump.

Trump and Clinton released their personal financial disclosure statements, with the Republican claiming more than $500 million in income in 2015 and a net-worth over $10 billion. Clinton’s financials showed she took in millions in book royalties and paid speeches last year. But Trump is continuing to refuse to release his tax returns which would provide additional justification for his haul. Sanders requested a 90-day extension to file.

Trump may have largely self-funded his primary campaign, lending himself tens of millions on top of millions in small-dollar donations and promotional sales. But he has inked a pair of joint fundraising agreements with the Republican National Committee and some state parties that will allow him to raise up to $449,400 from top donors.

On the Lonely Island of ‘Never Trump’
Across Washington, stalwarts of the GOP foreign-policy establishment find themselves suddenly adrift. Could they really vote for—gulp—Hillary? [Politico]

“What Trump did was so insensitive. First, not all Hispanics are Mexican. Secondly, not all Hispanics eat tacos. Thirdly, showing your sensitivity by eating an American dish is the most insensitive thing you can do. Fourthly, to say this, next to all things he already said, is a further insult. It’s like eating a watermelon and saying ‘I love African-Americans.’” — Jeb Bush to Dutch newspaper NRC Handelsblad on Donald Trump’s taco bowl tweet

Lawsuit Over Emails Could Hurt Clinton More Than FBI Probe

“We know the truth. He’s not Hitler. He wants to help America. He wants to unite people. They think he doesn’t but he does. Even with the Muslims, it’s temporary.” — Melania Trump on her husband, Donald Trump 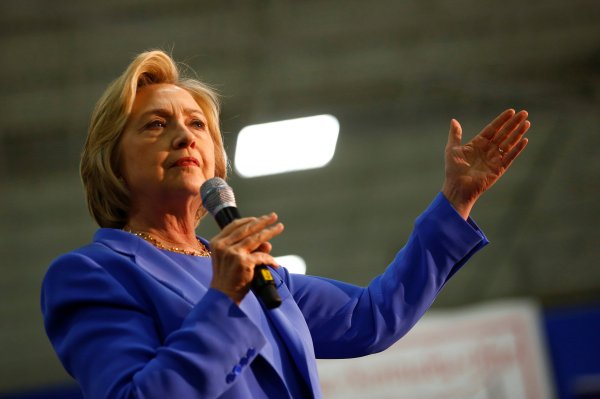