A contingent of players from newly crowned English Premier League champions Leicester City arrived in Bangkok in the early hours of Wednesday morning to be met by local media and a few dozen eager soccer supporters.

Goalkeeper Kasper Schmeichel, forward Shinji Okazaki and manager Claudio Ranieri were among those who posed for photos and greeted Thai fans with the traditional Buddhist gesture of a wai.

The celebrations mark what has been described as one of the greatest ever underdog stories in sport. Just two years ago, Leicester City wasn’t even in the Premier League. This year, they won the championship after William Hill, the British bookmaker, gave them 5,000 to 1 odds.

Not all the team made the trip to Thailand, coming as it did so soon after the end of the season in the U.K. on Sunday. There was an open-top bus parade through the city center of Leicester in the English East Midlands, in front of an estimated 250,000 frenzied local fans, on Monday. The drinking, dancing and unabashed tears of joy reportedly continued well into the next morning.

Read More: What to Know About the Greatest Cinderella Story in Sports History

But the fact that many officials and players made the 6,000-mile trip, immediately after Monday night’s and Tuesday morning’s revelries, is testament to the genuine affection for the club’s Thai chairman, Vichai Srivaddhanaprabha.

In an email to TIME, the Mayor of Leicester, Sir Peter Soulsby said, “It is a rare thing that the owners of a football club are taken to a city’s heart in the way that Leicester’s Thai owner has been. Vichai Srivaddhanaprabha, and the success of the club under his stewardship, has helped create a huge amount of pride in the city. The team has helped write a new chapter in the story of Leicester with its astonishing Premier League win and helped capture the imagination of fans and media across the world.

“I am sure that the team will be welcomed as champions during their visit to Thailand, just as the owners were applauded as local heroes during the city’s recent victory parade.”

Leicester City's Marc Albrighton and Danny Simpson arrive in Bangkok for the Post-Season Tour of Bangkok on May 18, 2016.
Plumb Images/Leicester City FC/Getty Images

The CEO of Thai duty-free retail giant King Power, Vichai may be rich, but no one doubts he has been canny with his budget. Over the 2015-16 season, the club spent less than 50 million pounds on wages — the fourth lowest in the league.

In comparison, Manchester United has spent more money on signing players in the last two seasons than Leicester has spent in its entire 132-year history.

Last week, Leicester’s vice-chairman, Aiyawatt Srivaddhanaprabha, son of the King Power chief, said that he and his father wanted to fly the team to Bangkok “to see the Thai people,” and so players could see “how welcome they are.” adding that it was an opportunity for the players to show their appreciation for the Foxes’ growing support in the Southeast Asian nation.

He reportedly also warned the squad about behavior in the Thai capital, a year after an end-of-season tour resulted in a sex scandal involving three youth-team players, including then manager Nigel Pearson’s son. The three were subsequently sacked, and Pearson Senior left the club soon after.

This whistle-stop visit to Bangkok marks the culmination of a dream-come-true season for Leicester, known in Thailand as jingjawk siam, or “Siamese Foxes.” Nowhere has “Foxes Fever” been more evident than here in Thailand, where soccer fans have been quick to embrace the Thai-sponsored team as one of their own.

The Leicester City FC Facebook page now has more than 650,000 followers, up from just 6,000 at the beginning of this Cinderella season. One of those fans is 13-year-old Sopong, who said: “The reason why I like Leicester is because it is Thailand’s team.”

Soccer-mad Thailand has traditionally been a hotbed of support for traditional heavyweights Manchester United and Liverpool.

Speaking to TIME recently, Wanchai Rujawongsanti, the sports editor for the Bangkok Post, said he believed many Thais now support Leicester because of the club’s Thai connections. “But if Leicester had not been in contention for the title, very few people would follow them … If Manchester United or Liverpool were challenging for the title, fans would surely have supported them instead.”

Signs are clear that Leicester City has stolen the hearts of many in this country. At the Chiang Mai Night Bazaar in northern Thailand, a mannequin at a street stall sports a royal-blue Leicester team jersey with the name Vardy emblazoned on the back. Arsenal, Chelsea, Barcelona and Man U shirts lie unremarked on the table.

Some 250 km south of Bangkok, in the coastal town of Prachuap Kiri Khan, Sk2 bar owner and lifelong Leicester fanatic Darren Robinson has meanwhile made a name for himself by dedicating his pub to the team. He was in the Thai capital to greet the team on Wednesday, following a meeting with King Power CEO Vichai Srivaddhanaprabha, and said he was also looking to purchase one of the new jerseys for the 2016-17 season. He expects to pay 1,900 baht ($60) for the Puma-designed top — a steep price when compared with the ubiquitous knock-offs priced at just 300 or 400 baht at markets around the country.

“But I can’t complain after what they [King Power] have done for our team,” he said.

Another Leicester fan who has gained more than his stipulated 15 minutes of fame is the club’s official drummer, Lee Jobber, whose extensive body art bears testimony to a life devoted to the team.

Speaking to TIME, he sent a personal message to all the Siamese Foxes fans in Thailand: “A big thank you all for following the best football club in the world.”

But despite the close ties that have emerged, there no guarantees are in place that Leicester’s success will have a domino effect on the Thai game.

“Several young Thai players, who are sponsored by Leicester City, are studying and training in England,” says Bangkok Post’s Wanchai. “However, Thai players playing for Leicester is another matter. Although the Leicester owners are Thais, they cannot just hire Thai players. You must be good enough.”

Back in the English East Midlands, the last of the revelers may finally be heading to bed by now. At the King Power Stadium, the stands that witnessed the spectacular triumph are finally quiet.

Downstairs in the corridor outside the dressing rooms, a plaque sits on the wall, a small framed tapestry of Buddhist symbols known as yantra. The mystic diagrams were left behind by Thai monk Phra Prommangkalachan, when he was flown over to the U.K. last year by the Thai chairman to bless the ground and pray for the teams’ success.

Thai Buddhists believe in karma, the belief that what comes round, goes round – that you reap what you sow. By visiting Thailand so soon after winning the league, the Leicester team has shown respect and nourished those Buddhist spirits. Perhaps some good karma from Thailand will help propel the club to success again next season. 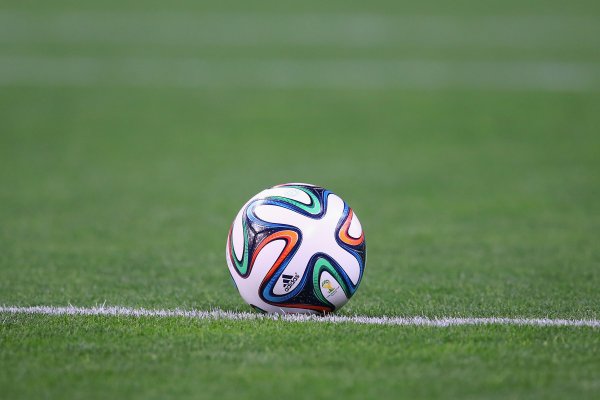