A supporter is seen with a sticker on her face during a Republican presidential candidate Donald Trump rally at the The Northwest Washington Fair and Event Center on May 7, 2016 in Lynden, Washington.
Matt Mills McKnight—Getty Images
By Jay Newton-Small

In 2004, George W. Bush won reelection by mitigating the loss of the women’s vote to Democrat John Kerry to less than 10 percentage points. He did this, in part, by scaring “security moms” not to change horses mid-war. In 2016, Donald Trump is employing a similar strategy with women, on steroids.

Trump’s approach to female voters is one of hyper-masculinization: he portrays himself as strong and his opponents weak, particularly on national security, and he pledges to protect women from rape or murder by illegal immigrants, invoking the murder of Californian Kathryn Steinle by an undocumented man early and often on the campaign trail.

“Trump uses masculinity to prove he can be the tough, strong protector of the nation, something that could resonate with women and men alike who are most concerned about the country’s—and their family’s—vulnerability,” says Kelly Dittmar, a researcher at Rutgers University’s Center for American Women and Politics.

That tactic worked among Republican women, particularly by the end of the primary season, with Trump winning the women’s vote in most primaries after Florida. The Public Religion Research Institute and The Atlantic magazine issued a report earlier in April that found that Trump supporters were far more likely than others to agree that America has become “too soft and feminine.”

But will it work against Hillary Clinton, likely the first female nominee of either major party? Experts are dubious.

First, “times have changed,” says Jennifer Lawless, head of American University’s Women & Politics Institute. “In 2004, we were amid a new war in Iraq and the Democrats had not sufficiently shored up their national security credentials. ‘Security moms’ were Bush’s to lose. I’m not sure that’s the case anymore. The GOP’s advantage on these sorts of issues isn’t what it was a decade ago, and no one would consider Hillary Clinton a dove.”

Bush in 2004 was coming off of the September 11, 2001, terrorist attacks and was in the midst of two wars. Bush was also much more of a hawk than Trump, who is reviled by many neoconservatives as an isolationist.

Bush’s strength with women was also regional, according to research by the University of Maryland politics professor Karen Kaufmann. Southern white women backed Bush heavily, but the gender gap in the rest of the country remained on par with virtually every other election since 1980. Kaufmann hypothesizes that, while Bush play for “security moms” was likely a factor, his strength with social conservatives and his platform of “compassionate conservatism” may also have helped. And while Southern white evangelicals turned out for Trump in the primaries, the twice-divorced casino-owner is not considered one of their ranks the way evangelical born-again Bush was.

Third, Bush’s base of supporters has shrunken relative to the overall electorate in recent years. In 1980 when Ronald Reagan defeated Jimmy Carter, the non-college educated white population constituted a bit more than 60 percent of voters, according to Michele Swers, a Georgetown political science professor who has written two books on women in politics. By 2012 non-college educated whites were only 36 percent of voters. In 1980, Reagan won 56 percent of white voters and he beat Carter by 10 points, 51-41 percent. In 2012 Mitt Romney earned more of the white vote, 59 percent, yet he lost to Obama 47 to 51 percent.

“If the electorate continues to include more women, minorities, and college educated voters then it will be difficult for Trump to win with his current coalition,” Swers says. “He will need to make more efforts to mobilize women who lean Republican, particularly the white, married suburban women and that is why he is going after those security/soccer moms by touting his ability to protect them and their families.”

That said, even that demographic is shrinking, according to Melissa Deckman, a Washington College professor and author of “Tea Party Women.” “Even if Trump can gin up support based on national security among white, married suburban moms, there are fewer of them now than there were in 2004 as a percentage of the electorate,” Deckman says. “Romney and McCain did very well among white, married women but their share of the electorate is shrinking and is smaller than it was in 2004.”

In 2016, white married women with no college degree—perhaps Trump’s greatest potential voting pool among women voters—make up just 22 percent of eligible women voters, according to demographer William Frey at the Brookings Institution. Single women are now the single largest voting bloc in America, accounting for nearly a quarter of all voters cast in the 2012 elections. Indeed, Romney won married women by 7 percentage points, but Obama’s 36-point blowout amongst single women handed him the victory with women overall by 11 percentage points.

All of which is to say, in order to win Trump will have to find a way to mitigate his likely loss of single women to Clinton and, again, experts aren’t hopeful. His past statements on women have already done deep damage, with polls showing women disapproving of him anywhere from 50 percent to 73 percent. “I am predicting that 2016 will likely result in the largest gender gap in presidential voting we have seen in the past four decades,” Deckman says. 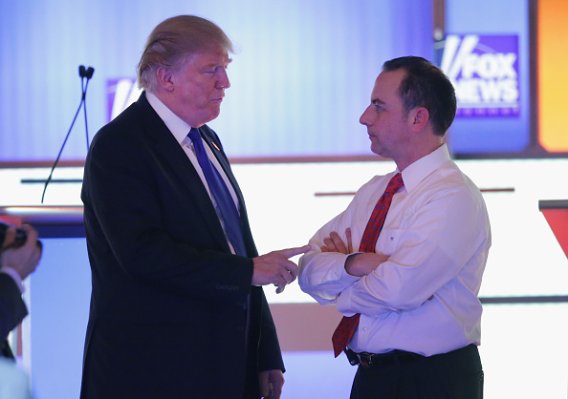 GOP Won't Rush to Defend Trump
Next Up: Editor's Pick