Why Jonathan Franzen's Appearance on Jeopardy! Was Perfect TV

Jonathan Franzen just had his most substantial TV appearance in years. And it took place on a quiz show.

The novelist was one of the first three competitors on Monday’s kickoff of “Power Players Week,” an assemblage of journalists and intellectuals. His rivals included Meet the Press moderator Chuck Todd and conservative commentator S. E. Cupp; Senator Al Franken and comedian Louis C.K. are to appear later in the week. The concept may be slightly drier than the infamous “Celebrity Jeopardy” of past eras (and of the Saturday Night Live parody) but the concept is still the same; this represents among TV’s very best opportunities to see famous people’s true character when they’re put in a difficult situation.

Franzen did not, in fact, win—although he did quite well throughout the episode. (He led going into Final Jeopardy but wagered too much on a question that all three failed to get—an unforced error.) But the novelist who listed his name as “Jon” was the undeniable star of the episode. “Oh God, I should know this!,” he exclaimed after Alex Trebek read a clue about Shakespeare; elsewhere in the episode, he described the dialectical method in his biographical chat with Trebek, all to carry across why he hates Twitter. He kept returning to a category about birds his competitors were more reticent to touch, too-quickly calling out “BIRDS—” before Trebek cut him off to throw to commercial. And when he erred, Franzen would lean to the side, as though to protect himself, or cringe so visibly it sent waves of discomfort through the screen.

This was, in short, a humanizing portrait! Franzen, who rose to his current level of hyper-prominence in an incident in which he was disinvited from an appearance on Oprah, was clearly a bit more nervous than his assured competitors, who work in TV. But that added to the sense that the novelist, who’s become a figure representing far more than himself, is just another person who knows some but not all of the answers on the board. Similarly humanizing were Cupp’s and Todd’s failures to get the Final Jeopardy answer, which referred to the Latin origin of the political term “veto.” They’re political professionals who were both clearly a bit unnerved in the setting—leading into one commercial break, all three contestants shared little psych-up high fives.

The framing of “Celebrity Jeopardy,” in the public imagination and in the long-running sketch featuring Darrell Hammond as “Sean Connery,” is that it’s a place for stars to humiliate themselves, to prove just how unintelligent we all know they are. The “Power Players” week gave a different impression. It’s not that any of the three particularly dazzled with their brilliance; the simplistic questions, seemingly a tad easier than in regular play, don’t lend themselves to redefining a star as a savant. But all three seemed as earnest and as on-edge as the regular civilians who go before Trebek most weeks.

In the world of human resources, it’s often said that making people complete unorthodox tasks (like an “escape the room” challenge) is more revealing of true nature than a classic interview. I’d wager the same is true of taping an episode of Jeopardy as opposed to making Franzen, or Cupp, or Todd sit for an interview. You can tightly control the things you say, but anyone who’s been on Jeopardy would tell you that the way you act on air is the result of simple adrenaline. I can’t wait to see who ends up, like Wolf Blitzer, thousands of dollars in the hole at the end of an episode. It won’t mean anything other than itself (Jeopardy is not a life skill), but how this Power Player reacts to all the power being in the hands of Trebek and his producers has the potential to make some figure from the news feel, briefly, just like any of us watching at home. 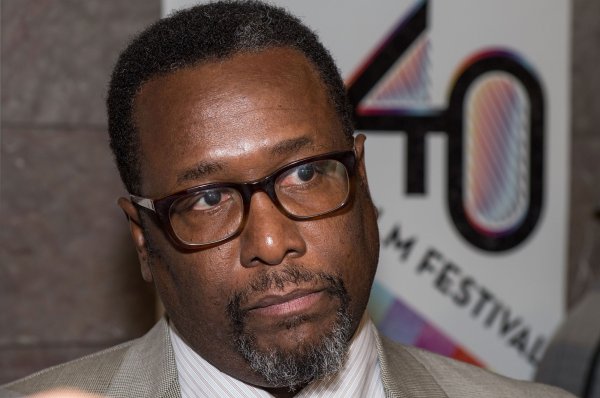 Wendell Pierce Says He Regrets Altercation That Led to His Arrest
Next Up: Editor's Pick