Kathleen Sebelius speaks during the Aspen Ideas Festival at the Aspen Institute on June 26, 2015 in Aspen, Colorado.
Leigh Vogel—WireImage
By Jay Newton-Small

Former Health and Human Resource Secretary Kathleen Sebelius, whose job it was to implement the Affordable Care Act, told TIME on Monday that the Supreme Court’s unusual decision to punt Zubik v. Burwell back to the lower courts with instructions for the parties to reach a compromise was actually a win for the government.

A quick back-story: Sebelius was amongst those who successfully lobbied President Obama for a narrow religious exemption—allowing only a few religious employers participating in Obamacare to opt out of providing free contraception to female employees. A crafts retailer, Hobby Lobby, sued to be included in the exemption on the grounds that some of the contraception covered under Obamacare, such as morning-after pills, violated their religious belief that life begins at the moment of conception—even before the egg has attached to the uterine wall making a pregnancy viable.

After the Supreme Court found for Hobby Lobby, thus applying the exemption to any institution seeking it, the Administration decided the government would cover the costs of contraception for women whose companies opted not to cover it. This solution was also challenged by religious institutions, who argued that the act of informing the government or insurers violated their religious beliefs, and seven cases were bundled and sent to the Supreme Court.

The Court heard the case and in an unusual move less than a week after oral arguments asked for additional materials from both parties about whether a compromise might be reached. In this case, the compromise would seem to be that the institutions seeking exemptions tell the insurers and the insurers tell the employees separately that the government would then provide coverage—though the details will have to be ironed out by the parties and the lower courts.

Here’s a transcript of an interview with Sebelius.

What did you make of today’s decision?

It’s a curious decision because they don’t weigh in on the merits, which I interpret to mean that they had a tie and could not resolve the case fully. In the long run, if I read between the lines and saw what the administration put forward, this is pretty close to where the government had suggested they could end up which is basically where women will have no cost to contraception provided regardless of who their employer is. … At the end of the day, women will be protected and I think that has been the goal all along—to not have an employer decision stand between women’s right to get this benefit and on the other hand try to have the least imposing way for employers to comply so that it didn’t violate their religious objections. Both sides seemed to have come forward and said they can do this, so life will go on and people will continue to get benefits. It still leaves pretty unresolved the overall issue of religious freedom and where all this stands, but it’s a good resolution for the millions of women who potentially could have lost health benefits.

You lobbied the President with your fellow female Cabinet members and with the women of the White House for a narrow religious exemption. Is this something akin to what you envisioned?

The goal was to not take larger categories of women out of the benefit picture because of where they worked. So not having an employer determine women’s right to access health care. And I think this decision continues down that path. So even if an entity, say a religiously affiliated Catholic hospital or university, felt they did not want to directly offer contraception benefits because of religious objections, the women who work there—the nurses, teachers, students, spouses—will still have access to this benefit and that’s been the goal all along.

Do you think this case would’ve gone differently if late Justice Antonin Scalia had still been on the bench, especially given his arguments in the Hobby Lobby case?

I think the decision in 2012 by the court [which upheld the underlying mandate of Obamacare] took every body by surprise. I’m not sure anybody could’ve predicted that outcome with that [court] make up. So I stopped trying to second guess folks. I do think listening to some of the debate back and forth and certainly watching the Hobby Lobby instance, there was a view that certain justices, including Justice Scalia—who felt pretty strongly about limiting benefits although it seemed to go against some of the philosophical views that he’d had on religious freedom—that this decision was never complicated. It’s interesting, they didn’t wait till very last decision day to announce this [as is often the case with controversial decisions]. They went back and in a somewhat unusual step they asked the parties, can you submit more information, can you come up with an accommodation. So they gave a little bit of a hint even after the arguments that they may move in this direction and indeed they did.

But they wouldn’t have deadlocked with Scalia there?

Hard to tell. But it does seem that that maybe certainly one of the ways you can interpret this. Although a 4-4 deadlock would’ve meant in most of the cases the administration position would have been upheld because that’s where the circuit courts were. I found that the concurrent opinion by Justice [Sonia] Sotomayor made it very clear that this should not be interpreted as the court weighing in on the merits of the case, should not be interpreted on the direction the court would’ve gone. So I think in this one they found a way to find a reasonable compromise and they decided to go there.

Have you been surprised at all at the pace at which the court has taken on Obamacare–slower or quicker than anticipated?

I’m not the one to probably even give an opinion on that, Jay, because I’m not a lawyer. I don’t know how other constitutional challenges on big laws have gone, if this is a slower or faster pace. I can’t speculate on that, I just don’t know.

So, would you say today’s decision was a win for women?

I think it’s a win for women, yes. I know there was some disappointment in communities that it leaves unresolved the underlying question and so there’s uncertainty there that hopefully eventually will get solved but for the immediate future hopefully courts will take the Supreme Court seriously in what seems to be a pretty clear direction that women should continue to have this full range of benefits without costs and copays that’s the purpose of the law in the first place and I think that’s a significant win for these women employees and spouses. 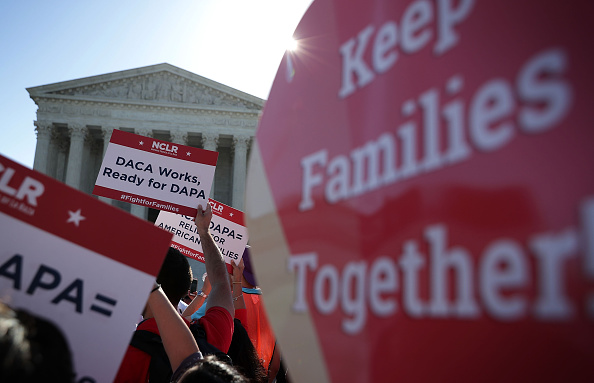 Supreme Court Clashes in Immigration Case
Next Up: Editor's Pick