Kate, the Duchess of Cambridge, boxes during a Heads Together mental health campaign launch in Stratford, East London, May 16, 2016.
Jeremy Selwyn—Pool/Reuters
By Simon Perry / People

Princess Kate is working to knock out mental illness – literally.

The Duchess of Cambridge, alongside husband Prince William and brother-in-law Prince Harry, showed off her “mean right jab” at an event for mental health campaign Heads Together in London on Monday.

Three-time world champion boxer Duke McKenzie said Kate “couldn’t wait to get the gloves on and had a wicked punch.”

McKenzie also revealed that Harry hit the hardest: “Harry’s a banger make no mistake about it. He runs like a Bentley or a Rolls Royce – he purrs quite well. I’ve boxed my whole life and he’s got a fair punch on him.”

However, he cautioned not to mistake Kate’s softer hits for a lack of boxing prowess.

“Not just her beauty by the way – the way she carries herself with her hands up and chin down a little bit. I think she’s done this before.”

McKenzie added, “It’s great that they’ve put their time and effort to this. This is going to be a success. It’s going to highlight so much and make so many people much more aware of mental health problems.”

“Boxing’s a great way to stimulate your mind,” he said. “Keeping fit is a very important part of anybody’s development but more so if you’ve got mental health problems.

“They wouldn’t have put their names to this event if it was going to fail. It shows how serious they are about it.”

The royals met with a group of eight charities that make up their Heads Together campaign at the launch event in London.

William, Kate and Harry announced the charity with a fun video in April.

Monday saw the three tour an exhibition space for the charities that are tackling the stigma of mental heath difficulties across various areas of society.

The royals hope their campaign will encourage people to feel comfortable with their everyday mental well-being, be able to support friends and families who maybe facing difficulties and ensure stigma doesn’t prevent people seeking the help they need.

Heads Together is the biggest project they have undertaken together and encapsulates areas they have already started work in.

Kate has been focusing on the mental well-being of young people and children, while William has been working to highlight the issue of male suicide.

Harry has used his Invictus Games to highlight the invisible wounds of war and, just before the games in Orlando last week, he told PEOPLE in an exclusive interview, “Once you’re in that dark hole, that slide show is constant, one after the other. Those who do suffer from [flashbacks], we need to be able to help them. It’s not a life sentence, far from it. If we’re able to talk about it and give them the platform, then great.” 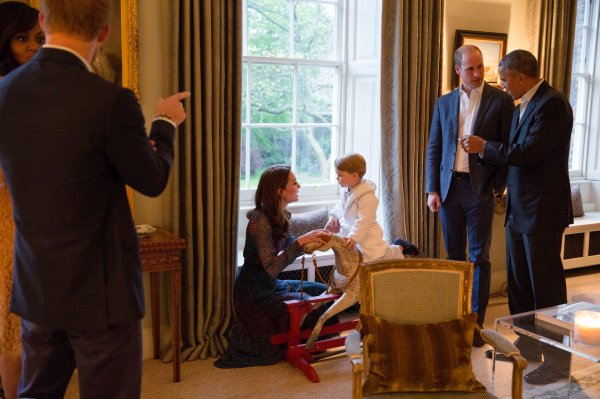 Prince George's Robe Has Sold Out Already
Next Up: Editor's Pick