Donald Trump hasn’t held a public campaign event in nine days, and his schedule for the week remains clear. Instead the presumptive GOP nominee and top aides are making the rounds of television shows as they seek to continue his most unconventional campaign. But the limits of that strategy are emerging, as Trump faces tougher questions about his taxes, shifting policy positions and treatment of women. In addition, the candidate found himself on defense this weekend over a leaked audiotape of a man, who sounded awfully like Trump, promoting Trump’s personal and professional conquests. Trump’s free-media first strategy worked well when he was one in a field of 17, now it will be tested when he’s the undisputed GOP nominee. Trump has tried to seed that coverage by leaning into the process media stories about who is running which aspects of his campaign and the members of his VP shortlist. But the appetite for Trump news is growing, potentially beyond the candidate’s control.

Hillary Clinton still needs to contest the upcoming Democratic primaries, even though her nomination is assured. Just two weeks away from locking in the required delegates, Clinton has no choice but to grin and bear Sanders’ futile challenge, or risk alienating the very supporters she will need come November against Trump. But the extended primary fight comes at a cost, preventing Clinton from fully focusing on Trump and costing her precious resources before what will be an expensive general election campaign. Additionally, Sanders’ continued criticism of Clinton only prolongs the party’s divide and makes unification more difficult. But Sanders has managed to shift Clinton to the left on policy issues—and his demand for influence over the party’s platform will be difficult to ignore.

President Obama weighs into the 2016 fray with an assault on Trump. Another president offers Clinton a boost. And John Boehner is back.

Clinton Caught in End-of-the-Primary Trap
The Democratic front-runner needs to start focusing on Donald Trump. But she can’t do that without alienating Bernie Sanders’ supporters [Politico]

On More Than One Issue, GOP’s Trump Sounds Like a Democrat
But the conservative embrace continues [Associated Press]

Hillary Clinton Outlines Economic Plans, Which Include Her Husband
The First Husband may get a jobs role [New York Times]

“Look, I mean, these are things that he is going to have to answer for.” — RNC Chairman Reince Priebus on questions about presumptive GOP nominee Donald Trump’s treatment of women

“They can try to hijack another party and get on the ballot, but, look, it’s a suicide mission for our country because what it means is that you’re throwing down not just eight years of the White House but potentially 100 years on the Supreme Court and wrecking this country for many generations.” — Priebus on some GOP efforts to mount a third-party challenge to Clinton and Trump

Is Ben Carson the Worst or the Best Surrogate of All Time? Yes. [Washington Post]

The Return of John Boehner [Politico] 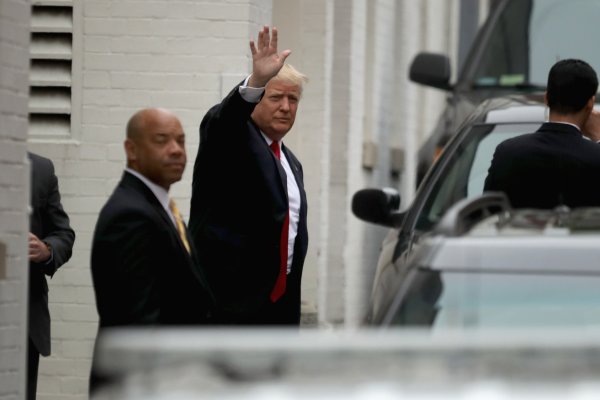 Donald Trump Ex-Girlfriend Comes to His Defense: 'He Was a Gentleman'
Next Up: Editor's Pick