John Oliver Declares an Emergency on 911 on Last Week Tonight

John Oliver dedicated this week’s episode of Last Week Tonight to 911, or in Oliver’s words, “The place you call right after WebMD says you’re not going to be able to get it out on your own.”

The U.S. makes roughly 240 million 911 calls per year, in emergencies and non-emergencies (like when this two-year old called 911 for help with her outfit or this woman who called over her wrong pizza order). Most of the time 911 calls work exactly the way they are supposed to do with operators dispatching emergency services to the caller, but sometimes things go very wrong, like when first responders can’t help people in need due to poor location tracking technology. Some 911 call centers are underfunded, understaffed, and full of out-dated technology. “Which is fine if you’re describing a Radio Shack, but is a little scary if you’re calling a place that handles emergency situations,” Oliver said.

Oliver finds the lack of effective location services on cell phones particularly frustrating because the Domino’s Pizza and Uber apps can easily track an individual’s location, but 911 can’t. In addition to an antiquated tracking system, many 911 call centers are understaffed. “911 staffing problems are a thing that a ridiculous number of cities have like a Chinatown and a statue of someone racist,” Oliver noted. The lack of sufficient staffers means callers may be put on hold while in the midst of an emergency, which would be unimaginably stressful and frustrating.

In light of 911’s struggles, Oliver invited comedians Rob Riggle and Wendy McClendon-Covey to make a more appropriate PSA about 911 services for kids. 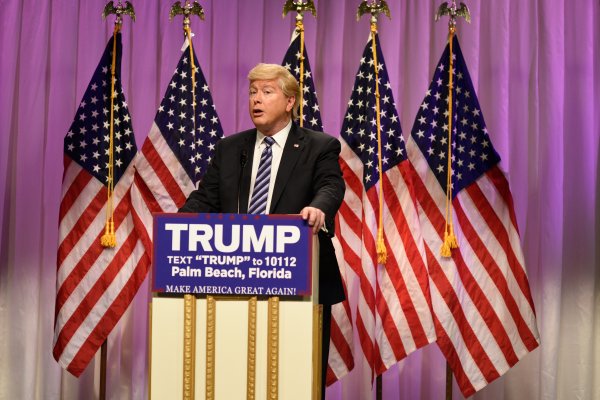 SNL Mocks Donald Trump for Being His Own Publicist
Next Up: Editor's Pick