Sometimes when things aren’t going well, there’s an urge to purge—and Congress seems to be reaching that point with the U.S. military, sputtering along in Afghanistan and Iraq after more than a decade of inconclusive fighting. Late last week, the Senate Armed Services Committee sent a shiver through the Pentagon when it proposed a 25% cut in the number of generals and admirals fighting the nation’s wars.

That’s 222 of the Defense Department’s 886 generals and admirals. “This provision is necessary because the size of the general and flag officer corps has become increasingly out of balance with the size of the force it leads,” the committee said in its summary of the action it wants to take in the 2017 defense budget. “Over the past 30 years, the end-strength of the joint force has decreased 38%, but the ratio of four-star officers to the overall force has increased by 65%,” said the committee, chaired by Senator John McCain, R-Ariz., a son and grandson of Navy admirals.

Generals and admirals will argue, privately of course, that running the U.S. military today is a lot more complicated than it has been in the past. Fighting terrorists is a brain-intensive, not brawn-intensive, work. Cyber and missile-defense slots, not to mention overseeing the production of ever-more-complicated weapons, require constellations of generals and admirals. The emphasis on joint assignments, where officers serve in jobs outside their service, has fattened the senior ranks.

Posh, others say. “I think there has been grade creep,” says Anthony Zinni, who as a four-star Marine served as chief of U.S. Central Command from 1997 to 2000. That was before the wars in Afghanistan and Iraq, which occurred in Centcom’s region. “Did we really need four-star commanders in Iraq and Afghanistan?” Zinni wonders. “The size of their forces did not warrant the number of stars based on historical comparisons.”

There is a sense that Congress and the Pentagon, following the 2001 terror attacks, reflexively added stars to show they were serious about battling al Qaeda. “But it’s as important to shutter unneeded or redundant headquarters as it is to salami-slice the `staff kudzu’ that has grown up since the 9/11 attacks,” says Dave Barno, a retired Army lieutenant general (three stars) who commanded all U.S. and allied forces in Afghanistan from 2003 to 2005. “Fewer general officers makes sense—but chopping some of the overlapping and less-than-critical service and joint headquarters with their always-busy staffs is an even better idea.”

In actuality, part of the problem is that there are plenty of generals and admirals doing lots of things other than waging war—ranging from legal officers to medical officers to public-affairs officers—as well as battalions of generals doing jobs that colonels used to do.

Military scholars agree with the need for cuts, if not their depth. “When the number of generals is growing, while size of force is shrinking, that seems to indicate a disconnect,” says Peter W. Singer of the New America Foundation. “A modest reduction may be appropriate, but I’m not sure one can rely on the simple metric employed by the armed services committee,” says Michael O’Hanlon of the Brookings Institution. “Pruning may be wise but I’m not sold on the case for a 25% cut just yet.”

Like any bureaucracy, those at the top take care of their own, even as the ranks below are thinned out. There are at least 12 U.S. generals assigned to the war against ISIS inside Iraq, according to a recent Daily Beast tally—or one general for every 400 or so U.S. troops there.

The higher the rank, the more money it costs taxpayers—and a four-star’s $181,500 in basic annual pay is the least of it. They’re flanked by aides, and the higher the rank the more aides there are, and full generals and admirals—those wearing four stars—tend to have peacocking fleets of generals and admirals with three, two or single stars working for them. This made more sense before instantaneously electronic communications, but today is serves to slow down, and raise the cost of, decisions that ideally should be fleet and agile, especially in wartime.

The Senate committee wants to cut the number of four-star billets from the current 41 to 27, a 34% reduction. Those surviving the bloodletting would be the seven members of the Joint Chiefs (there were only five not that long ago) and the heads of the nation’s nine combatant commands. Four-star officers not protected by the proposed Senate language include those fighting the war in Afghanistan (he reports to the four-star commander of U.S. Central Command), the director of the National Security Agency, and four-star officers from the Air Force, Army and Navy in the Pacific—all of whom report to yet another four-star officer.

The Army recently succeeded in convincing Congress to make that Pacific assignment a four-star billet. Part of its argument was that because the Air Force and Navy had four-star officers in their Pacific assignments, the Army wasn’t getting the respect it warranted from nations in the Pacific—never mind from inside the Defense Department itself.

It almost goes without saying that no one suggested that, instead of elevating the Army’s Pacific command to four-star rank, the Air Force and Navy slots be reduced to three-star positions. 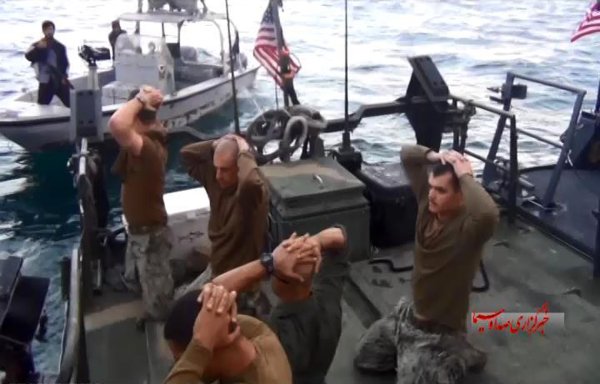 U.S. Cashiers Commander of Boats Seized by Iran
Next Up: Editor's Pick