It’s no secret that Selina Meyer is the villain of her own story. Bumbling and burdened with a staff of acolytes too willing to say “yes,” the Veep character’s sense of her own importance has outpaced, somehow, her elevation to the presidency. That’s been grist for laughs for several seasons. But on the episode “Mother,” Veep cast its eye on Selina (played, of course, by Julia Louis-Dreyfus) from a slightly different angle, and managed to depict her as less comic than tragic. The episode was funny, yes—but it was also one of the year’s single best episodes of dramas.

The plot, here, is that Selina’s mother is dying as Selina’s political future, during the Bush/Gore-esque recount, may be doing the same. Guess which concerns her more? We know little about Selina’s time before national politics, making the revelations, here—that Selina had a vexed relationship with an old-money mother whom she saw as hyper-critical—tantalizing. And the way they’re parceled out is more novelistic than I thought Veep capable of. The only thing about her mother’s care in the hospital that concerns Selina is her mother’s nails, for she knew her mother equated a good manicure with self-worth. And we learn about her upbringing through sharp visual details at the old manse.

The subtlety that surrounds Selina is made all the sharper by her broadness. Unmoved by the death of her mother, she is delighted by the crowds gathered to wish her well; her presidency may be nearing an end, but she’s delighted to be the People’s Princess. The comic element here is easily gleaned—it’s a funny reversal that she’s such a monster as to care more about the less important thing. But that Selina is, more than ever, seeking approval in the moments following the death of a mother who didn’t give it easily is moving and deeply human. That she’s continuing the cycle with her own much-neglected daughter is perhaps the episode’s greatest tragedy.

This artistic peak comes not a moment too soon. Veep has, somewhat dispiritingly, leaned further and further into nihilism this season, after the departure of sophisticated showrunner Armando Iannucci. Selina’s not human much of the time, no one is—they’re all too venal and too stupid. The point that everyone in politics is a soulless monster has, by now, been well and truly made; every re-appearance of acidic and homophobic Congressman Roger Furlong fills me with dread, as it’ll have little to show us but that Roger Furlong knows how to curse.

But episodes like “Mother” show why the show is equipped, at its best, to do something no other show can do. When Selina breaks down in the episode’s final scene, swaying and unable to speak when called upon to deliver a eulogy (“my mother had a good piano,” she begins, in a hilarious parody of the aptly-chosen anecdote), she’s mourning her career, her relationship with her mother, and her relationship with her daughter. Or mainly her career, or only her career. That you get to choose, and that even the least sympathetic viewing still allowed for some humanity, made “Mother” a transformative half-hour of TV—even if it was as gruesome, in its way, as anything that happened earlier in the evening in Westeros. 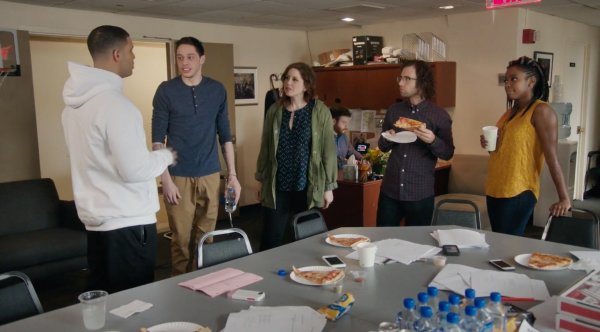 Watch Drake Rap About His ‘Beef’ With SNL Cast Members
Next Up: Editor's Pick