Your Age Isn't the Best Predictor of Your Health

Your age says a lot about you. Biologically speaking, doctors have relied upon it to immediately place you in certain medical categories. That’s because if you’re middle-aged or older you’re probably at higher risk of developing cancer and heart disease. Beyond 70? You’re probably more vulnerable to bone fractures and joint problems.

But this disease-specific or organ-specific way of looking at people isn’t the most accurate way to tell how healthy they really are. There are robust 80 year olds who are still physically active and mentally alert, and 55 year olds who suffer from serious joint problems and chronic heart problems. That means the concept of biological age, as opposed to chronological age, is gaining traction.

In a new report on the idea, published in the journal PNAS, researchers led by Martha McClintock, professor of psychology and comparative human development at the University of Chicago, describe a new model for assessing aging that includes things such as people’s mental health, whether they’ve had a bone fracture, and how mobile they are.

MORE: These Are the Genes Behind Healthy Aging

“We’re rethinking aging not as one set of railroad tracks that we all progress along, but appreciating that there are different pathways of aging,” says McClintock. “It’s more like deltas in a river. We get to the end of the journey on different pathways.”

Until recently, medical experts lumped some of those pathways together under broad categories of diseases. Get cancer, heart disease or diabetes, for example, and your aging picture looks a certain way, and your predicted health trajectory and risk of dying early works out to a certain pattern. But it’s clear that people respond to those diseases differently, and their baseline health, a combination of their genetics and their lifestyles, can also tweak those experiences in different ways and lead to differing outcomes.

In order to tease out which factors seemed to best predict healthy aging, McClintock and her team studied a population of 3,000 people aged 57 to 85 years enrolled in the National Social Life, Health and Aging Project. The study followed people for more than five years and recorded various physical and mental health characteristics. In particular, the scientists studied 54 health variables, including things like mobility and eyesight, that might play roles in how well people age.

Surprisingly, the people in the group that was deemed the healthiest after five years were typically heavier and had higher blood pressure. But they had fewer specific diseases and were mobile, retained their eye sight and hearing, and had good mental health.

The next healthiest group ere those with normal weight who did not have heart problems or diabetes, but did have at least one minor condition, including ulcer or anemia. They were twice as likely as the healthiest group to die during the five year follow up.

The unhealthiest group included those with diabetes that wasn’t treated, and people who were relatively immobile.

The findings highlight how complicated the picture of aging is, and, says McClintock, supports the idea of coming up with a more comprehensive, rather than disease-specific way to evaluate people’s health as they age. Clearly, assuming that all people who are overweight are unhealthy may not be helpful. While overweight and obesity are certainly risk factors for many chronic diseases, including heart problems and diabetes, if people reach older age while carrying more weight but aren’t suffering from these conditions, then they might be relatively healthy.

More important than weight in predicting who might be vulnerable to ill health are things like bone fractures and poor mental health, according to the study. “We’ve shown that these other measures are just as important if not more important than organ system diseases in predicting healthy aging, so it’s crucial to include them in the practice of medicine and in healthy policy,” says McClintock.

These findings certainly won’t be the final word in healthy aging, but they’re critical in creating a more open and wide-ranging conversation about what it means to age in a healthy way, and the best way to do that. 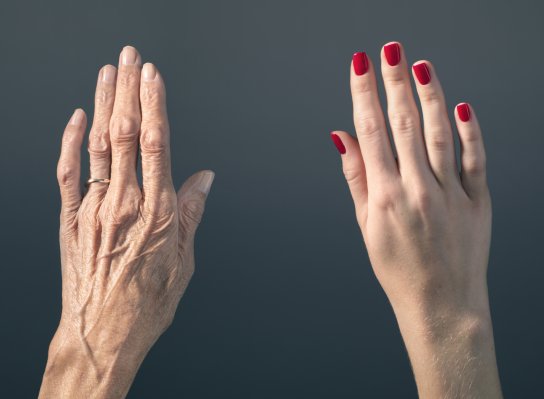 The Gene That Makes You Look Older Than You Are
Next Up: Editor's Pick