The Cultural Revolution and the History of Totalitarianism

This week marks the 50th anniversary of the beginning of the Cultural Revolution in China. Beginning in 1966, Mao Zedong, who had withdrawn somewhat into the background of the Chinese leadership in the previous years, marshaled the youth of China in a new campaign against supposed party deviationists and class enemies. Eventually, the terror destroyed the lives and careers of perhaps millions of Chinese people, including anyone whose life or career showed any traces of western influence, including classical musicians. The terror developed a momentum of its own, especially in the countryside, and did not abate until after Mao’s death in 1976.

Seen in retrospect, these events have an even greater world-historical significance. Together with the terror wrought at the same time by the Khmer Rouge in Cambodia, the Cultural Revolution was the last outburst of 20th-century totalitarianism, a phenomenon that also included Stalin’s Russia and Hitler’s Germany, and was captured for all time in one of the classics of 20th century literature, George Orwell’s 1984.

The classic totalitarian regimes all shared a few characteristics. They attempted to control every aspect of the lives of their people, enlisting everyone in a common struggle against designated enemies, foreign and domestic, and forcing them all to adopt official ideology. In Stalin’s Russia and Mao’s China the key enemies were class enemies: capitalists, landlords, richer peasants and foreign agents of all kinds. In Nazi Germany they included all those not belonging to the national community, including socialists and communists, Jews, and any other ethnic minorities. All these regimes created a single party that stood outside of, but also largely dominated, the traditional state. All of them murdered or imprisoned millions of their citizens. All of them organized young men and women into various kinds of uniformed organizations and militias to turn their energies in approved political directions. In China and the USSR, they also took over the national economy. And they maintained an absolute monopoly over all forms of public expression, never permitting dissent to emerge. What distinguished them most of all from other authoritarian regimes was their active mobilization of their whole people in a struggle against designated enemies.

Like any successful historical phenomenon, these regimes drew on very real aspects of human nature. To submerge one’s self in a common struggle can be oddly liberating and exhilarating, and nations of all kinds have drawn upon this during wars. Yet the problem all these regimes encountered was that such passions can only be sustained for so long.

Eventually both the elites and the rest of the population become weary of struggle and want to settle down to enjoy a more peaceful life. That shift, however, will weaken their allegiance to the regime and its goals. The leadership generally responds with a new campaign against its enemies—but by this time, most of its real enemies are dead or long since driven into exile. Thus it has to turn either against innocent people or against its own party structure. That is what Stalin did in the 1930s, when he eviscerated the leadership of both the party and the army, and what Mao decided to do 50 years ago. And Orwell, writing when Stalinism remained at its height and when Mao was winning his civil war, captured the atmosphere of endless struggle against imaginary enemies perfectly in 1984, where no one is safe against the suspicions of his neighbors or his children, and party members periodically vanish.

We must not however lose sight of another key aspects of these regimes. While they successfully unleashed popular passions and undertook campaigns of terror, they claimed to be based upon science and reason and presented themselves as the summit of human enlightenment. Stalin and Mao claimed to be implementing Karl Marx’s “scientific socialism,” while Hitler thought racial purity would allow him and the Nazis to create a better type of human being. And indeed, all these regimes achieved extraordinary feats of organization, in infrastructure and industrial (in the USSR and Germany at least), and war. None of them, however, managed to make their regimes endure. War brought down the Nazis after only 12 years, and natural human forces led to the collapse of the USSR and Communism after 72 years, in 1989.

Although the Communist Party still rules China, 67 years after Mao first took power, by no stretch of the imagination could that country now be described as a totalitarian state. The same can be said of Vietnam. A milder form of totalitarianism has survived for 57 years in Cuba, but the opening of relations with the U.S. will probably bring about more changes there soon as well. North Korea is now the only remaining example of 20th century totalitarianism.

But that doesn’t mean totalitarianism is gone.

During the 1990s, after the fall of the USSR, many predicted an enduring triumph of democracy. But just as the Cultural Revolution was coming to an end in China, a different kind of totalitarianism began to take its place—one based not on the Enlightenment, but on religion. The Khomeini regime in Iran, which came to power in 1979, sought to regulate every aspect of Iranian life according to a strict interpretation of Islam. While many traditional monarchies had enforced religious orthodoxy in the past, this was the first 20th-century regime to use a modern national government to impose strict religious observance and conduct. Just a year after taking power, the regime also had to mobilize its people for an all-out war with Iraq that lasted for eight years. The Iranian regime is now 37 years old, and like the USSR in 1954 or Communist China in 1986, it has seen a cooling of its ideological fervor.

The Iranian regime has had imitators. ISIS has now created a new totalitarian movement based on its own interpretation of Islam. Though the group is not recognized internationally as a state, it bears the markers of totalitarian government: regimenting the lives of all the people under its control, terrorizing and murdering non-Muslims and committing itself to an endless struggle to seize the whole Middle East and create a Caliphate.

The impulse to regiment the lives of a whole people is always the basis of totalitarianism. While the new movements are nowhere near as large or as dangerous as Communism or Nazism, they pose as least at great an ideological challenge to the modern world. While both the Nazis and Communists argued that all their works were based upon reason and science, ISIS rejects both and appeals specifically to faith. They have restarted a war between faith and reason that seemed to have been won only a few decades ago. 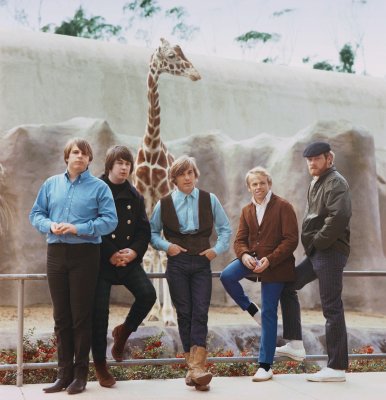 The Story Behind the Iconic Beach Boys 'Pet Sounds' Album Cover
Next Up: Editor's Pick