The royal wrapped his Invictus Games in Orlando, Florida, on Thursday after five days of competition, entertainment and inspiration.

In his remarks at the closing ceremonies on Thursday evening, Harry saluted the athletes and moments that embodied the spirit of the Games.

“What could explain the remarkable sportsmanship of Mark Urquart in sacrificing gold on the track to push Stephen Simmons into first place? Invictus!

“How else could I describe the way I felt seeing Tim Payne, a man I met three years ago to the day, in his hospital bed at Walter Reed, beaming as he wore his gold medal round his neck? Invictus!

“What defines the spirit of Denmark’s Jonas Andersen, who loaded the coffin of his friend onto the flight which changed my life in 2008, and then fought through his own dark days to compete in London and Orlando? Invictus!

“What is the force that drives Elizabeth Marks to return to these games after nearly dying two years ago, to compete now, at the highest level, in a sport that renders her blind and faint? Invictus!

“What makes us cheer for Luke Synott, who took up wheelchair tennis, not just to represent his country again, but so he could play the sport with his children? Invictus!

“Why did we stand in our seats, cheering our hearts out as Jordanian Wheelchair racer – Ulfat Al-Zwiri – fought, inch by inch, to the finish line? Invictus!

“What else could we say about the woman who wrote to me after watching the opening ceremony on Sunday night to say she’d realized the time had come for her husband to get help for his depression? Invictus.

“Why did the 9/11 hero, Sarah Rudder, pick herself up when she fell, just meters from the finish line, and push on for a silver medal and into the embrace of her French rival? Invictus!

“You are all Invictus. You are now ambassadors for the spirit of these games. Spread the word. Never stop fighting. And do all you can to lift up everyone around you.”

At the close of the game, Harry took the mic to address the crowd.

“Thank you so much to everyone here for making unbelievable memories for every single person,” he said to thunderous applause.

“Fair enough, USA, I’ll give it to you,” he said of the win. “But let me remind you, this has never been about the medals. This is about sharing experiences and literally watching lives change in front of you. We’re the lucky ones to have witnessed it together.”

During an emotional montage of the week’s biggest moments, Harry said, “This is coming back from rock bottom. This is not a soft story. Far from it. This is a story of Invictus spirit.”

The closing ceremonies featured a parade of athletes from around the world who competed in a variety of events, as well as Second Lady Dr. Jill Biden, U.S. team Captain Will Reynolds, Prince Harry and performances by Rascal Flatts, Rachel Platten, Jordan Smith and Flo Rida.

The closing also involved a flag handover from Orlando to Toronto, where the 2017 Games will be held. 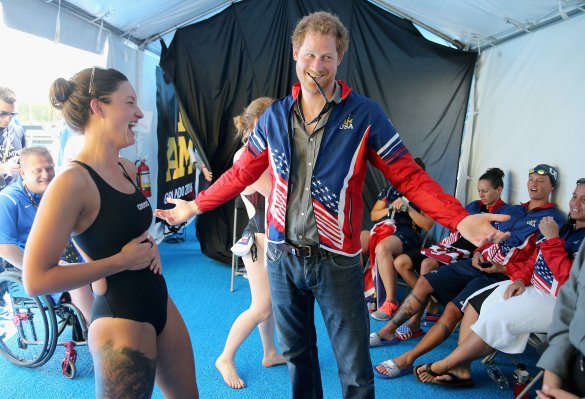 This Is The Invictus Swimming Champion Who Surprised Prince Harry And Gave Her Gold Medal Away
Next Up: Editor's Pick