Sun, Sea and ISIS: How Radical Insurgents Have Made the Southern Philippines a No-Go Zone

Members of the Philippine Navy Special Operations Group (NAVSOG) take their positions as they simulate the rescue of a hostage victim as part of an amphibious raid and special operations exercise by the navy at a marine training base in the town of Ternate in Cavite province, the Philippines, on Sept. 24, 2015, days after gunmen abducted three foreigners and one Filipina from a luxury island resort on Samal island
Ted Alijibe—AFP/Getty Images
By Charlie Campbell / Samal

Gagay Jaire’s proudest moment was making the hajj pilgrimage to Mecca. “It was inspiring,” she says, drawing clear, cool water from a cast-iron pump on the northeast rim of Samal Island in the southern Philippines. “It is one of the Muslim dreams to reach Mecca.”

Since she returned from Saudi Arabia, where she worked for fours years, Jaire moved back to her family home next to the island’s Dungas Mosque. The squat, whitewashed building is the largest of Samal’s four Muslim places of worship, sitting right on the shore between tidal fishing pens of crooked poles and fields of scavenging goats. “It’s a beautiful spot,” she grins.

It is for some, at any rate. On Sept. 21, Samal ceased to be an insular idyll and became instead an infamous site of global terrorism, presenting a security headache for the nation’s new President, Rodrigo Duterte, who was elected by a landslide on May 9.

That day, just a few miles down the palm-fringed coastal road, beyond rows of drying coconuts neatly sorted into halves, quarters and shards, around 20 members of Abu Sayyaf, a local Islamist militant group that recently pledged alliance to ISIS, launched a speedboat raid on the plush Holiday Oceanview Resort.

They abducted four guests: two Canadians, John Ridsdel and Robert Hall; Hall’s Filipina girlfriend Marites Flor; and Norwegian national Kjartan Sekkingstad. The kidnappers demanded a $100 million ransom after making an easy escape. “Unfortunately, the lead time that the abductors had and the darkness of night were able to cover the retreat of the abductors,” military spokesman Colonel Restituto Padilla told reporters in Manila.

No ransom has been paid. On April 25, the severed head of Ridsdel, a 68-year-old Calgary businessman, was found in a plastic bag on in a street in Jolo, the main island of Abu Sayyaf’s heartland of Sulu, itself a chain of islands that stretches from Mindanao to the northern tip of Malaysian Borneo. His three fellow captives remain among a dozen foreign hostages held by the group.

“Abu Sayyaf are not good Muslims,” says Jaire, her gregarious demeanor abruptly lost in a grim frown. “Taking persons to another place like that and to kill him, they do not believe in God, in Allah.”

The Philippines is no stranger to militancy. Islam arrived to the archipelago’s south over half a century before the Spanish colonizers, and its practitioners naturally railed against the Catholic rule of European interlopers. There was also all round brigandage. “Since before Spanish colonial rule, the Tausugs of Sulu had a cultural affinity for piracy and head-hunting,” says Joseph Franco, a Philippine terrorism expert.

Kidnapping is bread and butter for Abu Sayyaf, whose adherence to Islamist doctrine has waxed and waned according to the whims of its leadership. Often, it is little more that a criminal enterprise that uses the specter of extremism to strike fear into its victims, and encourage the payment of hefty ransoms. Many join the group out of desperation. “There are 14- and 15-year-old farming kids who join Abu Sayyaf simply because they pay more,” says Clarke Jones, a radicalization expert at Australia National University.

As such, the beheading of Ridsdel was probably an act of brutal expedience. “Ridsdel was too sick to move around and posed a liability,” says Franco, “so they killed him.” Franco adds his beheading was probably also an attempt to attract acceptance, and thus elicit funds, from ISIS central command.

Philippine domestic terrorism has been complicated by the emergence of ISIS, and fissures within Abu Sayyaf itself. A faction led by Radulan Sahiron has not pledged allegiance to ISIS leader Abu Bakr al-Baghdadi, but the impoverished Basilan faction, led by Isnilon Hapilon, has been accepted as an ISIS branch in the Philippines. It has changed its name to ISIS Philippines and adopted the terrorist group’s black battle flag.

“The rank and file of Abu Sayyaf are deeply influenced by ISIS’s battlefield successes,” says Professor Rohan Gunaratna, a terrorism expert at Nanyang Technology University in Singapore. “Abu Sayyaf fighters spend their evening watching ISIS videos. If Radulan Sahiron is killed or dies, it is likely that the entire Abu Sayyaf will join ISIS.”

According to Abdul Sahrin, secretary general of MNLF’s Sima faction, “A good number of youths are already attracted to [ISIS]. In the Sulu archipelago as much as 10-15 % could support them. They feel hopeless.”

This threat is replicated all over Southeast Asia, especially in Malaysia and Indonesia, where would-be jihadists are regularly intercepted en route to Syria to fight for ISIS. Jakarta was rocked by an ISIS-inspired bomb-and-gun attack in January.

It’s a security headache for President-elect Duterte, who was voted in on his pledge to fight crime, drugs and corruption based on his three decades running Davao City, which sprawls across a narrow strip of sea from Samal. There, the 71-year-old former lawyer and prosecutor quelled an epidemic of crime, drugs and kidnappings launched by gangsters and politically motivated rebels.

Abu Sayyaf were already stepping up their attacks in the run up to his election. According to Gunaratna, the latest attack was on a Philippine army position in the town of Maluso in Basilan province, where one soldier was killed and another wounded. It was the second attack in the Philippines claimed for ISIS, the SITE Intelligence Group says. (The first, on April 13, saw nearly 100 Philippine troops killed.)

Though Duterte’s reputation is uncompromisingly tough on those who bring terror to the city of 1.5 million, he draws grudging respect from rebel groups for his honest sympathy for their grievances. Moro leaders backed his call for the presidency, given his support for devolving power to the regions through federalism. His close personal contacts to rebel groups, particularly the communist New People’s Army (NPA), are well known. On April 25, the NPA handed over five kidnapped policemen to Duterte personally.

Yet Duterte’s zero-tolerance approach fighting crime — “death squads” under his control are responsible for hundreds of extrajudicial executions, say human-rights groups — may backfire. According to Jones, “With this new President we’re in for a crisis in the Philippines correctional system.”

The nation’s already brimming prisons — one Manila jail boasts 1,700 maximum security inmates, the largest such facility in the world — have long been crucibles for radicalization, and a recent crackdown on gangs means the eye has been taken off the terrorist cells, says Jones.

Speaking to TIME last month, Duterte fully backed Washington’s war on terror. “The U.S. is hunting down rebels all around the world and they have every right to do it,” he told TIME. “America can just go in and out of any country like the big boss, strutting around like they own the place. I don’t mind that, as the fight against terrorism really is a war.”

The people of Samal are very much aware of that war. Security is tight all over the island. Guests need to sign waivers from their resorts simply to wander out onto the pearl-white beaches, and there is a 10 p.m. curfew. At Oceanview’s concrete perimeter walls, a security guard’s terse refusal of entry is accented by twitches of a shotgun. (Requests for comment from the resort’s management were unanswered at time of publication.)

“We have over 20 security guards,” says Rhonade Manlunar, standing sentry at the Samal’s Pearl Farm resort, which was hit by a failed Abu Sayyaf kidnapping raid in 2001 that claimed two lives. “Police, army and private security all patrol here.”

For many, that is still not enough. Tourist arrivals are down. Francis Scott, a dad of two from Nova Scotia who has lived 12 years in the Philippines, says a large number of the 120-odd foreigners who have homes on Samal haven’t returned after the Oceanview raid, even if the local community is rallying around. “I know an Australian who lives in the middle of a Muslim village and they are very protective of him,” says Scott, “as they don’t want to be associated if anything bad happened to him.”

For Jaire, the worry is more than just violence. She fears the allure of ISIS getting its tentacles into local youth. “We worry about young people going over [to the Middle East],” she says, as the fading dusk light drawing the world’s largest colony of fruit bats from the neighboring Montford Cave, swirling and diving overhead, forming a vast dark cloud. At least that cloud will soon be lifted; fear and Islamist militancy will loom over Samal for a long time yet. 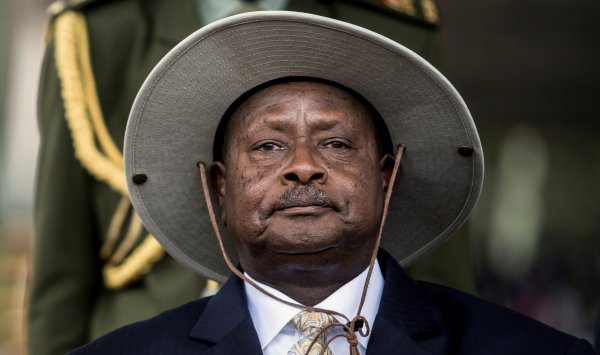