It’s 2005, and Mark Zuckerberg is mulling the interview question at his startup’s office as he sits beneath a Pulp Fiction poster, the same one plastered in dorm rooms across America for the last two decades. He clutches a beer in a red Solo cup and, at age 21, is just barely old enough to legally drink it. His voice still has an adolescent cadence.

“I mean, there doesn’t necessarily have to be more,” he says after a pause. “ You know, I mean, like a lot of people are focused on taking over the world or doing like the biggest thing, getting the most users… I mean, I really just want to stay focused on college and create a really cool college directory product that just, like, is very relevant for students and has a lot of information that people care about when they’re in college.”

Eleven years later, Zuckerberg’s ambitions for Facebook have evolved, and so has the way he delivers his message. Facebook has been growing at breakneck speed since its inception and now has more than 1.6 billion users. But only in recent months has Zuckerberg, now 31, begun to shed the persona reflected (and distorted) in an Oscar-winning film and a hit HBO series. Zuck is now a father and, like a typical Facebook user, he’s happy to share his baby photos. He says he wants to use his massive wealth for the greater good. And when you hear him speak now, you could be forgiven for thinking he sounds more like a man running for political office than a kid with a keg-stand in his near future.

In Silicon Valley, any founder who’s career lasts is bound to go through some evolution. The industry puts a premium on youthful leadership, and the brass that comes with. Experience tends to temper this. Steve Jobs famously mellowed by the time Apple’s historic turnaround was underway, at least comparatively to his early years. Bill Gates too shed his image as a barb-wielding engineer for one of global statesman. But Zuckerberg is younger than those leaders were when their ambitions shifted. And his invention overlaps more explicitly with what used to be called the public square.

This Zuckerberg was on full display in April at F8, Facebook’s annual developers conference. Instead of talking to the coders who make Facebook apps, Zuckerberg’s words were squarely aimed at the political and media elite, says Marty Kaplan, a University of Southern California professor who served as a speechwriter for former Vice President Walter Mondale. He compared elements of the speech to “the elegant part of a State of the Union address.”

First, Zuckerberg extolled the wondrous ways technology (and especially Facebook) has helped to connect the globe, arguing, “We’ve gone from a world of isolated communities to one globally community, and we are all better off for it.”

But then, his words grew more pointed: “As I look around and I travel around the world, I’m starting to see people and nations turning inward, against this idea of a connected world and a global community. I hear fearful voices calling for building walls and distancing people they label as others. For blocking free expression, for slowing immigration, reducing trade and in some cases around the world even cutting access to the Internet.”

Some read this as a dig at Donald Trump, the presumptive GOP presidential nominee who has called for building a wall at the Mexican border, banning Muslims from entering the United States and closing “parts of the Internet” to prevent ISIS attacks. Even if Zuckerberg has no plans to run for office, making implicit arguments against a potential future president place makes his speech inherently political, says Jeff Nussbaum a former writer for Al Gore and partner at the speechwriting firm West Wing Writers. [“It’s] political in that he’s advancing a vision not just for what his company should look like, but what the world can look like,” Nussbaum says.

Zuckerberg used classical rhetorical devices such as antithesis (“Instead of building walls, we can help people build bridges”) to give his ideas greater valiance. He applied “Skutnick stories,” a political technique popularized by Ronald Reagan in which leaders use small anecdotes about real people to humanize lofty ideas (“We are one global community. The mother in India, who wants to work so her family can have a better life. The father in the U.S. who wants a cleaner planet for his children. The daughter in Sierra Leone who just needs basic and health care and education so she can stay safe and reach her full potential.”). Though Facebook is a company largely guided by data, the speech was heavy in “pathos,” or appeals to emotion.

“What you’re seeing is a transition,” says Nussbaum. “He’s making an evolution from speaking as a business leader to speaking as a thought leader.”

In some ways, the high-minded rhetoric feels at odds with the low-brow discourse that’s often part of the day-to-day Facebook experience. We now use Facebook and its sister apps Instagram and Messenger 50 minutes per day, on average, and much of that time isn’t spent trying to revolutionize the world. When Zuckerberg says in a speech, “It takes courage to choose hope over fear,” it’s easy to imagine the phrase splashed in bold font over a black-and-white photo of a noble President (who cares who actually said it?), as easily shareable and digestible as a cat GIF.

But that doesn’t change the fact that the 31-year-old is now the sixth-richest person in the world, according to Forbes, wielding more influence over the information we see and how we communicate than any of the billionaires ahead of him. “He swings a big bat,” says Kaplan. “There’s a handful of globally powerful individuals, and no matter how they got their wealth and what you may think of the industries that they’re in, people listen when they speak.”

This cuts both ways. Especially following a Gizmodo report that Facebook workers in charge of placing news topics on the website’s “Trending” module purposefully suppressed articles from conservative outlets. The social network has said its policies prohibit such tampering but is investigating the allegations. The controversy has raised calls for greater transparency in how Facebook chooses what to show users in their News Feeds, Trending boxes and other parts of the site.

And it may breed suspicion about how Zuckerberg’s politics will influence what his billion-plus users are allowed read and watch every day. “Mark Zuckerberg is a publisher,” Kaplan says. “If Trending turns out to mean Curated instead of Algorithmed, it should come as no surprise that the editorial judgment of the curators on his payroll is consistent with the publisher’s politics.” Zuckerberg has said he plans to meet with leading conservatives soon to address their concerns about how the site operates.

As Facebook’s user base grows, so does the clout of its CEO. That brings him greater opportunities to effect change but also more responsibility in how he wields his influence, both internally and externally. Even as a college kid, it’s clear Zuckerberg understood that the things that happened on thefacebook.com could have and impact outside the site’s blue border. “The goal that we we into it with wasn’t to make an online community,” he said in 2005, “but sort of like a mirror for the real community that existed in real life.” 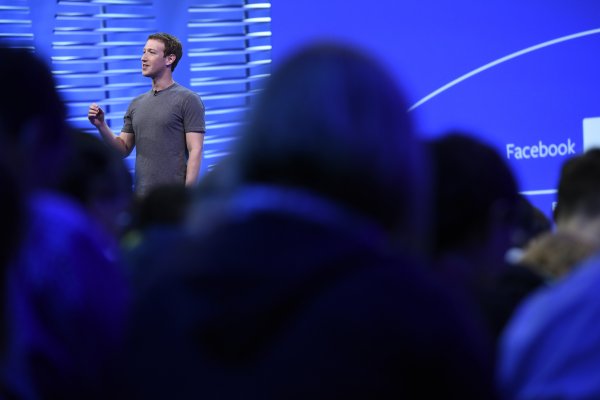