When Jodie Foster directed her first movie, Little Man Tate, in 1991, TIME ran a cover story about her titled “A Director Is Born.” Written by TIME’s late film critic Richard Corliss, the profile predicted that the 28-year-old would handle the transition from actor to director with the same grace with which she navigated her way beyond the perils of childhood stardom. “As the child performer was to the adult actress, so the tyro director may be to the mature auteur,” Corliss concluded. “If this is the larva, imagine the butterflies to come.”

In the 25 years since then, those butterflies have been few and far between. Foster directed just one more film in the ‘90s, 1995’s Home for the Holidays, and another, The Beaver, more than 15 years after that. She tells TIME she felt there was so much more she had to say, but the demands of her acting career and motherhood kept directing mostly out of reach. But now, with the release of Money Monster, her fourth and most ambitious film yet, Foster is determined to remain behind the camera—at least, until she decides it’s time to get back in front of it.

On its surface, Money Monster is a political thriller: After a bad stock tip, a disgruntled investor named Kyle Budwell (Jack O’Connell) takes slick financial TV host Lee Gates (George Clooney) hostage on-air, as his producer Patty (Julia Roberts) does her best to keep everyone alive (and make some good TV while she’s at it). It’s a global yarn that weaves together programmers in Seoul and hackers in Iceland, miners in South Africa and CEOs on corporate jets. To Foster, though, it’s an emotional journey about two men facing different flavors of failure, reckoning with their shame and all of the people, including themselves, they’ve let down.

With the film premiering at Cannes this week and opening in theaters May 13, Foster talked to TIME about the movie’s expression of “righteous rage,” why now feels like the time to focus on directing and why she’s excited to return to acting in her golden years.

TIME: Do you see Kyle as something of an everyman, standing in for Americans who feel screwed by the Great Recession?

Foster: Definitely. He starts off pretty threatening. He’s clearly unstable. He’s filled with righteous rage, so he’s not someone you want to emulate. And yet you see the simple things you completely relate to: that he has a terrible opinion of himself, he thinks he’s dumb, he’s thought he’s dumb his whole life. This glitch just keeps pointing a finger at him and saying, You’re too dumb to understand, and that sets him off.

It’s not a clean heroes-vs.-villains narrative.

His rhetoric about the system being rigged sounds a lot like that of Bernie Sanders.

We wrote it first! [Laughs] But listen, it’s a dialogue that’s out there. It’s not new because it’s true.

How much do you see this movie as reflecting political conversations in the ether right now?

I think it just reflects our time, in terms of our relationship with technology and the democratization that technology has brought us and the bad side effects of technology. 2008 was a wake-up call, people remember it, they got interested. Our film is talking about stuff that’s happening now. I do feel that the film is equal parts cynicism and absolute hope. Leaving the theater you could have some interesting political conversations. But I don’t see it as a political film. The best way to get people engaged is to make sure that you create characters that are emotional and full, where the drama comes first.

I understand Patty (Roberts’ character) went through some changes from the original script.

She probably changed the most. She was really just the producer of the show and said, “Go to two, go to three, go to two,” and we brought in the idea of her speaking into an earpiece, so they were able to have this intimacy during this whole crisis that nobody else was privy to.

George Clooney and Julia Roberts have such a believable rapport. How much of that was there from the get-go and how much developed during filming?

Was she actually in his ear?

No, never. We thought about that but we couldn’t figure it out with the schedules. They weren’t even in the same country.

Did you see yourself in any one of the characters more than the others?

Part of the job of being a director is seeing yourself in every one of the characters, and if there’s one salient feature in my films, it’s that everyone has a point of view. So I absolutely see myself in Lee, somebody whose entire self-worth is wrapped up in his image of himself as someone in the public eye and doesn’t know who he is unless he’s the center of attention. I see myself in Patty, the person who’s the methodical, calm producer, who’s producing everyone’s survival because she knows how to be head-first. And I see myself in Kyle, this rage of having done the right thing. I showed up on time, I worked hard, I did what I was supposed to do and I got screwed over, and it’s not fair.

Did this feel more ambitious than films you directed in the past?

Oh yeah. Obviously the budget is bigger, and two bigger stars, so there’s a lot more on the line. It’s a thriller and it operates as a general public film, and I think it should because that’s the best way to tell this story. But it’s also really intimate and complex and layered. I love the idea of being challenged to figure out how to do both of those things.

How do you think having such a long acting career influences your approach to directing?

Oh my gosh, everything. All those years of watching different filmmakers and how they come up with decisions and tell a story, all of that has just been a great film school. It’s not like I’m going to stop acting, but this is definitely my time to focus on directing.

Probably because my kids are older, they don’t need me to be 100% as present as they did before. In fact they need more space and they need to know that mom does something else that fulfills her. I only directed three movies in almost 20 years, and I sort of regret that because there’s so much I want to say, but I had a hard time juggling my acting life, my family life and the directing. I think unless you can commit to the directing 100%, it’s nearly impossible to get movies off the ground.

Does directing coincide at all with a desire to be less in the spotlight?

I think so, although I’ve done so much press in the last few months it really doesn’t feel like it! I think I just want to do the work, and I know that my job as an actor is obviously doing the work but it’s also promoting the movie and being a—brand is the wrong word, being a something—that’s not true of directing. My job as a director is the hard, dirty work of prepping and production and post and telling stories. A tiny portion of that is selling the movies, and right now that feels like a better balance.

A lot of women say that meaty roles dwindle after a certain age. What’s your stance on that?

Well, that’s just true. It’s true of characters in novels as well. I think people are inherently more interested in a younger person’s story, so there’s less stories about older people. But I’m still excited about making movies, and I’m excited about having a different kind of career as an actor now. I’m excited about being 60 or 70 and playing interesting parts where I’m not fighting the expectation of carrying the movie or looking glamorous. I think it’ll be nice to really do the work.

How tired are you of having to answer questions about the state of women behind the camera these days? You must be asked about it six times a day.

[Laughs] I’m not that tired. It’s good that people are talking about it now. I don’t know why they weren’t 30 years ago, because it’s not like it’s a new issue. There’s always been lots of women directors in Europe and on TV, that’s changed a lot in the last 20 years. It’s just mainstream features that haven’t. Diversity takes a hit when the studios are so averse to risk, and somehow women and minorities are considered risks. People want to change, they just don’t know how. You change the culture from within, and you have to challenge people to be interested in different stories. That’s where I think the dialogue has been kind of simplistic. It’ll be fun to start seeing people have a more complex dialogue about diversity in Hollywood. 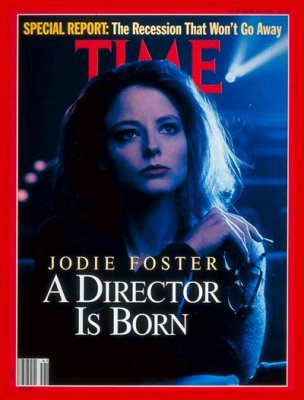 Jodie Foster on Directing in 1991: 'This Is Not a Business That Is Kind to Women'
Next Up: Editor's Pick