The Long History Behind Your Favorite Celebrity Commencement Speech

Students at a graduation ceremony at the Harvard Business School in 1938.
Fox Photos/Getty Images
By Merrill Fabry

Every year as summer edges ever closer and temperatures ever warmer, important people—ranging from the president to actors and from comedians to foreign dignitaries—flock to American colleges to give grads their two cents about life, work and everything else. The commencement speech has become its own advice-filled genre, spawning hit books and viral videos. But when did we become so inundated with by these seasonal advice-givers?

There’s no clear indication of which university started the trend of tapping celebrities to speak at graduations, but over the past three or four decades their numbers have grown from a few fun speakers amid a torrent of university officials to the flood of businesspeople, actors, writers and humorists who headline today’s ceremonies.

Notable politicians have been part of graduation ceremonies since the very earliest ones: Massachusetts Governor John Winthrop attended Harvard’s first commencement in 1642, when there were just nine “commencers.” But early commencement ceremonies were less about outside speakers than about hearing from the students themselves: those graduating would give orations in Hebrew, Greek and Latin as well as “disputations,” formal academic debates on philosophic questions. (The tradition of having a speech in Latin continues at some universities, though these days a translation is usually provided—plus, sometimes, instructions about when to laugh.)

Anthony Grafton, professor of intellectual history at Princeton University, says the commencement speech is “a very old custom and it goes with the idea that oratory was one of the central things that students were learning, and one of the central skills of the university.” Other speakers would also be academics, Grafton adds, who would demonstrate the level of disputation possible at different ranks of academic achievement.

Despite what sounds like a fairly dry program, these commencement exercises were a big hit. Samuel Eliot Morison’s 1935 text The Founding of Harvard College described the activities of early commencements: “the commencers now having proved their proficiency in the three learned tongues, and the audience being suitably impressed and exceedingly fatigued, the assembly adjourns at eleven o’clock for dinner,” Open to the public, it was also an occasion for revelry. Albert Matthews, who studied Harvard commencements from 1642-1916, likewise noted that “for nearly two centuries it was the great gala day of the colony, the province, the state” and that “not merely the alumni but the populace” would flock to attend.

Over time, however, oratory began to lose its place as a central skill students were expected to acquire at college. Accordingly, their students’ displays of knowledge became a smaller part of the commencement exercises. To fill the gap, in came the guest speakers.

Even so, those early commencement speakers tended to be from the university in question or statesmen of some sort, not cultural figures. Sticking with Harvard, for example, 19th century commencement speakers did occasionally break the mold—Leslie Stephen, father of Virginia Woolf and “man of letters,” was the 1890 speaker—but tended to be prominent figures from fairly staid and proper backgrounds, often British aristocrats. Over time, artists and businessmen began to creep in among the academics. At first it was a trickle (Carl Sandburg in 1940; Thornton Wilder in 1951). By the 2000s, the school featured speakers with more celebrity backgrounds, like J.K. Rowling and Bill Gates, about as often as world leaders and academics.

One reason why it may seem like there are more commencement speeches than ever is numbers: some individuals are sought after every year, and it has become a new normal for presidents to give multiple speeches each year. In NPR’s archive of 354 of the best commencement speeches, almost half were delivered after 2010, and only a handful before 1960.

And sure, recent speeches are easier to find and more likely to be relevant to our lives today—but that imbalance also reflects something deeper: changes in which jobs are considered important, whose advice is considered valuable, where we find counsel and who we most admire. 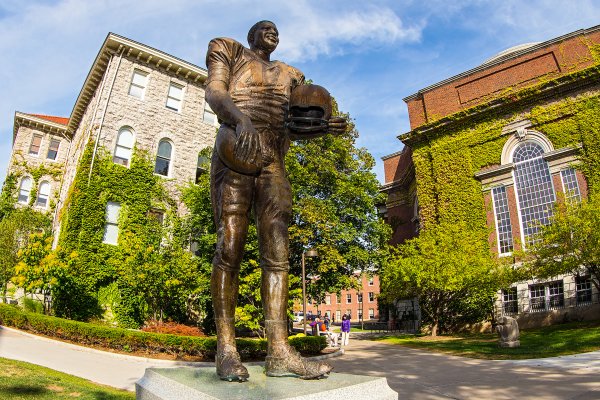 College Students Can Now Major In Moneyball
Next Up: Editor's Pick