Donald Trump will meet with House Speaker Paul Ryan Thursday as they seek to resolve a simple question with momentous consequences: who is in control of the Republican Party.

The meeting comes at a critical juncture as the two party leaders jostle for position as the face of the future of the GOP. Trump has claimed a mandate following his primary victories—nearly all a result of plurality, rather than majority, wins.

Relying on populist appeal, insults, and the force of his personality, his message is at odds with the more conservative policies Ryan has worked to carve since unexpectedly ascending to the speakership in October. Their meeting will seek to bridge the divergent strategies and principles promulgate by the two most visible Republicans.

Ryan, who made history when he withheld his endorsement of the party’s presumptive nominee on May 5, called on Trump to prove he was worthy of being the GOP’s standard-bearer, raising doubts about his commitment to conservatism. Trump expressed little patience for Ryan’s argument, asserting his right to the mantle of leadership given his victories, firing back that he wasn’t ready to embrace Ryan’s agenda, while suggesting the highest-ranking elected Republican wasn’t acting in the best interests of Americans.

While Ryan left the door open to an eventual endorsement of Trump, allies say they don’t expect such an move after the 9 a.m. meeting at the Republican National Committee, which includes Chairman Reince Priebus, or after a second meeting with other House Republican leaders. And confidants are lowering expectations, suggesting the meeting alone can’t erase Trump’s history of controversial comments.

“I’d be shocked if he embraces Trump all the way,” said one Ryan insider. “The things Trump has said and done, both the policy reversals and the insults, just in the last week, I can’t see how one meeting is going to change that. Trumps actions mean a lot more than any one meeting.”

Ryan was hardly alone in calling on Trump to do more to unify the GOP. Even as a range of GOP lawmakers said they’d vote for Trump, they criticized many of his positions. Priebus called Friday for Trump to adjust his tone before the general election to better appeal to minority voters and women—in particular criticizing Trump’s proposed ban on Muslim immigration—and to take further steps to appeal to the party’s conservative wing.

But in interviews and the four rallies he has held since securing the GOP nomination Trump has resisted calls to modulate his demeanor and mocked those in the Party who have contested his position. And over the weekend, Trump adjusted his position on two key policy issues away from conservative orthodoxy, suggesting that his tax plan would ultimately raise rates for those with higher incomes and expressing openness to raising the minimum wage.

For Ryan, outright rejection of Trump would be counterproductive to his twin goals of helping vulnerable Republicans—he needs Trump voters—and cobbling together a winning coalition needed to pass his legislative agenda. Should he go out of his way to alienate Trump and his supporters, Ryan could find himself bearing the brunt of their blame should Trump lose—dashing his hopes of reconciliation.

“This election is too important to go into an election at half strength,” Ryan said at a press conference Wednesday. “That means that we need a real unification of our party. Which, look, after a tough primary that’s going to take some effort.”

On Monday, Ryan expressed openness to stepping aside as the permanent convention chairman if Trump asked—a potential point of compromise that would benefit both parties.

With Ryan casting the meeting as an opportunity to get to know his party’ bombastic nominee, beginning a process, Trump indicated he was looking at the meeting as a one-and-done affair.

“Reince feels, and I’m okay with that, that we should meet before we go our separate ways,” Trump said in a statement Friday. “So I guess the meeting will take place and who knows what will happen.” 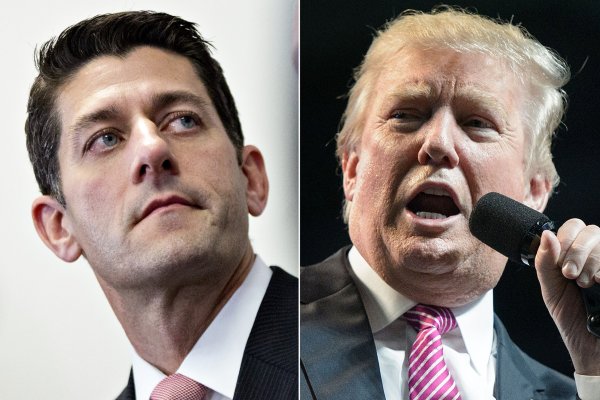