Lady Susan, the recently widowed gentlewoman at the center of Whit Stillman’s new comedy of manners Love & Friendship, opening May 13, is a master manipulator with a significant gift for cunning schemes. She’s also endlessly charming, a delight to be around and—as played by Kate Beckinsale— a delight to watch as she maneuvers through her master plan to find her and her daughter comfortably betrothed. Based on Jane Austen’s posthumously published epistolary novella Lady Susan, one of the author’s earlier works, Stillman’s adaptation is also a reunion between the filmmaker and actors Beckinsale and Chloë Sevigny, who costarred in his 1998 film The Last Days of Disco.

Though the movie is a lighthearted romp, for Beckinsale, mastering her character required more than withstanding corsets and delivering pithy quips. (“Facts are horrid things,” she laments at one point, without a trace of irony.) Lady Susan may be ruthless in her efforts to secure exactly what she wants—a rich husband, a hunky side piece and security for her child—but as Beckinsale tells TIME, “What she’s doing as a bright woman is using those things to create more freedom in her life than she’s actually allowed to have.”

Beckinsale sees a dotted line from Austen to her character, two women who had more to offer than their society was set up to allow. As her film hits theaters, she spoke to TIME about why Lady Susan was a pioneer for her time and how far women have come in the centuries since then.

TIME: What was your relationship with Jane Austen’s work before you signed onto this project?

Beckinsale: A very decent independent girls’ school education version. In England you specialize down to three subjects. I went into Russian and French and German literature and then did Russian and French literature at Oxford, so I wasn’t a scholar of Jane Austen by any means. I’d read what I thought were most of her major works and really enjoyed them, and I hadn’t heard of the novella until I was sent the script. I was a bit confused at first because it was so envelope-pushing that I thought Whit must have taken enormous liberties with it, but he hasn’t at all.

How much of the character did you pull from the original source material?

I’d say probably 85 to 90 percent of what comes out of my character’s mouth is word-for-word Jane Austen. I really did use the novella as a study guide, lobbied for various things to go back in and mourned certain things having to be out. It’s really nice when you have that as an adjunct to the script.

When you were preparing for the role, where did you find the heart in Lady Susan, beyond all of the self-serving manipulation?

Jane Austen, in a similar way to Lady Susan, had unbelievable constraints on her freedom, her voice, her sexuality and her finances. So for me, taking Lady Susan in that context as a woman who’s intellectually very bright, cultured, smart, social, witty, ambitious, and then the limited opportunity—Jane Austen herself couldn’t publish under her own name, and this is a genius person! I see [Lady Susan] as an early feminist fighter, because what she’s doing within the social confines is going, “No, I deserve to have my cake and eat it. I want freedom and a future for my daughter and I’m going to get it using what I have at my disposal, which is very advanced social interaction.” So I suppose she’s kind of delicious and wicked, but what life could you have as a smart woman who wanted independence at that time? What could you hope for really?

She’s a pioneer, but she’s also beholden to the social norms.

Exactly, and if she did have a bunch of fabulous career opportunities available to her and could make her own independent money, there would be no story. She’d have a few lovers and it would be 2016 and there wouldn’t be a movie. It’s sort of impossible to transplant her out of that time to judge her.

Lady Susan is also a master of spin, convincing others that her own shortcomings are justified for one reason or another. Do you think she believes her own spin?

I think she knows she’s doing it, but in the sense of all great manipulators, you could probably put her on a lie detector test and she’d pass it. She’s in her own narrative so completely, and her big conversation with her daughter is, how are you going to live if you don’t marry this person? She’s not a nurturing mother, but she is extremely influenced by the fact that she doesn’t want her daughter to end up in the poorhouse. She allows herself to lie to people and to herself in a way that feels like she’s telling the truth because at base she feels like it’s not fair. Because it’s not.

The ending is a bit abrupt because it’s based on this unfinished work which Austen never published in her lifetime, and who can know what she meant to do with it?

It’s probably completely fanciful, but I do sit there and think, I know that Jane Austen is a woman of that time period, and is completely gifted with far more than anyone’s share of intellect and instinct and wit and ambition. It feels like [she may have thought], I’m going to write my shadow here, my frustration, and this heroine that’s going to be ruthless in bucking the social norms. When you are doing one of those writing exercises where you pour out something that comes from frustration or despair, you don’t always want to publish that. I think it went in a drawer—this is me surmising and I have no business doing it—and then her nephew published it much later on. It’s a real window into how far we’ve come, that we can declare our intellect and wits in ways that aren’t just about procuring a husband. Not that we’re finished, but there’s been quite a long journey. 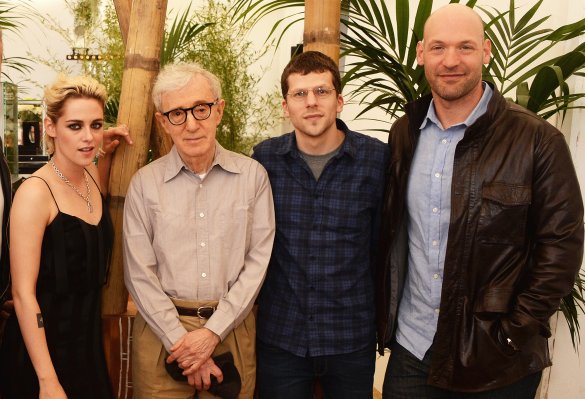 Woody Allen Sidesteps a Rape Joke in Cannes
Next Up: Editor's Pick