This Gif shows the differences between two versions of the same photo taken by Steve McCurry.
Steve McCurry; Gif by Kenneth Bachor for TIME
By Peter van Agtmael

Steve McCurry, a photographer who has reached iconic status following the publication of his Afghan Girl portrait in National Geographic in 1985, has found himself at the center of a controversy over image manipulation. The Magnum member is accused of photoshopping elements out of his photographs – a “mistake” McCurry has blamed on bad procedures at his studio.

Peter van Agtmael, also a Magnum photographer and one of McCurry’s colleagues, reacts to the industry’s outrage in the following opinion piece. His views, he says, do not represent those of Magnum, “a place that often seems to have far more opinions than it does photographers.” He adds: “Although Steve and I are both Magnum photographers, we have only met in passing several times.”

If my Facebook feed is any judge, there are a whole lot of people in the photojournalism community who are upset with Steve McCurry. When I saw the alterations, my first reaction was confusion. If he wanted to manipulate the images, why would he have approved such incredibly shoddy work? His explanation that someone in his studio acted unilaterally seems plausible enough. I don’t know the answer, nor do I care much (for me, the content wasn’t meaningfully altered, nor were the prints being made for a context that demanded absolute adherence to a precisely captured moment), and really this most recent scandal is a springboard to discuss some parallel issues.

There is one very important qualifier I’d add. Any photographer working predominantly in a photojournalistic context needs to be rigidly transparent about digital manipulation (and Fred Ritchin’s “Four Corners” proposal, which transparently embeds each photographer’s code of ethics into their images while including the necessary context, could help if adopted by the industry).

I don’t take issue with most forms of manipulation, but deception isn’t acceptable.

Photography is an incredibly subjective craft. In the criticisms of McCurry, there were a lot of loaded words like ‘truth’ and ‘objectivity’ being thrown around. I don’t really believe in these words. I’ve never met two people with the same truth, nor seen true objectivity ever demonstrably applied to anything. They are nice words, but remain aspirational and cloud a more nuanced interpretation of reality and history. We shouldn’t mistake something factual for something truthful, and we should always question which facts are employed, and how.

The refugee crisis was doubtless one of the most documented events in human history. But if you look at the images that dominated the mainstream media and were validated by contests, they usually showed misery and fear, mostly in the form of rafts of refugees arriving in Lesbos. Are those pictures a potent symbol of the crisis? Absolutely. Is it accurate or balanced that they almost entirely control the visual narrative? Absolutely not. Arabs (and many other groups) have been objectified and dehumanized in the media for decades. The same tropes constantly repeat themselves, mostly highlighting violence, victimization and exoticism. After ten years working in the region, this certainly isn’t my truth, nor does it even hint at anything that could be called objectivity. Yet these kinds of hyper-dramatic but ultimately repetitive and narrow images repeat themselves year after year, usually devoid of context.

The very nature of what is photographed and how is heavily affected by the influence of admired photographers with distinct personal visions, patterns of success in contests and the traditions and expectations of the commissioning body. Style, lens choice, position, what to show and what to exclude in the framing, editing, equipment choice, toning, sequence are all manipulative and subjective.

The result is a collection of facts that tends to be sanctimoniously declared as representing ‘truth.’ At best, these facts are a coherent personal truth. At worst, they are a distorted and overly dramatized look at complex issues in often marginalized, objectified communities. Often, they are something in between.

To capture something happening in a pinprick of time is inherently a limited means of understanding. Factor in history of representation, complex racial and identity politics, and the demographic breakdown of many World Press winners (white, western males, or those working for organizations dominated by them), and you end up with a very imperfect rendering of the world.

Peter van Agtmael is a photographer represented by Magnum Photos. 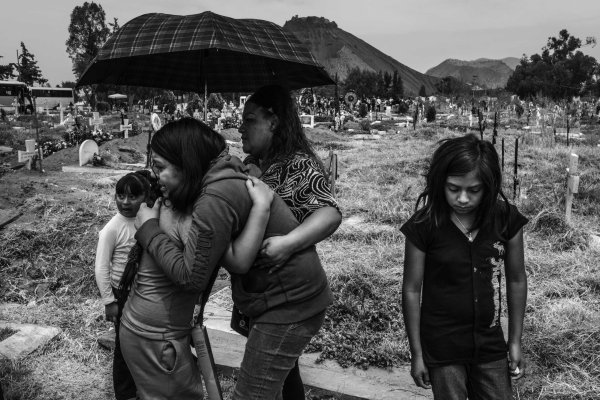 Confronting Death in Mexico City
Next Up: Editor's Pick