The Surprisingly Fascinating Reason the U.S. Has Nickel Coins

On May 16, 1866, Congress authorized the creation of a new American coin: the five-cent piece composed of copper and “not exceeding twenty-five per centum of nickel.”

In other words, they created the nickel—which celebrates its 150th birthday on Monday.

The idea makes sense: five cents is a useful amount, especially in a world in which that amount could buy about 15 times more than it could today. Except the U.S. already had a five-cent coin in circulation. The so-called “half dime” had been around since the 1790s.

But in the 1860s, Americans began to hoard silver and gold—including silver half-dime coins. One theory for the hoarding is that the upheaval of the Civil War led Americans to sock away their coins, while the Standard Catalog of United States Paper Money posits that people had an extreme “ingrained distrust” of paper money—”an attitude more than justified by the nation’s experience with non-metallic currency up to that time”—that led them to prefer silver and gold. Whatever the reason, the vast numbers of the nation’s coins hidden under mattresses and floorboards was making it increasingly difficult to conduct normal business.

Substitutes were tried: for example, using postage stamps as currency, or creating “fractional” paper bills. These bills were printed in several denominations between three and 50 cents, but the five-cent fractional bill was particularly problematic. Not only was did the U.S. not have enough silver to redeem the bills in circulation with half-dimes, but the head of the Currency Bureau, Spencer M. Clark, caused a scandal by putting his own face on the bill. (According to legend, a portrait of “Clark” had been approved, but it was supposed to be William Clark, as in “Lewis & Clark.”) Congress had to pass a law, in April of 1866, banning the “portrait or likeness of any living person” on U.S. currency.

Read about the endurance of the penny, here in the TIME Vault: Waiting for Change

The new law would leave the nation without five-cent fractional bills or enough silver half-dimes. And so nickels—which, not coincidentally, are set apart from other U.S. currency by being named after the metal they contain—came into being soon after. The first ones are known as “shield nickels” for the image on their face. Meanwhile, in the same act that authorized the nickel, Congress put an end to the printing of any fractional notes worth less than ten cents. 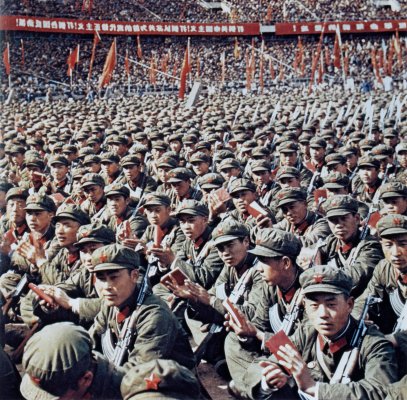 The Cultural Revolution and the History of Totalitarianism
Next Up: Editor's Pick