The Hyperloop Is One Step Closer to Reality

Nearly three years ago, technology billionaire Elon Musk proposed a radical idea: Why not create a transportation system that involved putting people-filled pods in low-pressure tubes, then zipping those pods along with fans or magnets at speeds topping 700 miles per hour?

Preoccupied with other radical ideas involving space rockets, electric cars and solar power, Musk released his early thoughts to the public. He was effectively challenging the world to build the seemingly outlandish system, called the Hyperloop. And it’s working.

The Hyperloop took its biggest-yet step towards reality Wednesday when Hyperloop One, one of two leading companies working on the concept, successfully and publicly tested its propulsion system in the Nevada desert, accelerating a sled from zero to 105 miles per hour in slightly over a second. The vessel, built without brakes, unceremoniously ended its brief 400-foot journey in a pile of sand.

The test is a noteworthy moment in Hyperloop history, to be sure. But the propulsion system is only one of several components necessary to build a working Hyperloop. Also required are some kind of levitation system (which would lift a pod above a track, reducing friction and increasing speed) and a low-pressure tube (which creates an environment with less drag, also increasing speed.) Hyperloop One has yet to publicly demonstrate either of these other ingredients, though it has previously promised a full-scale “Kitty Hawk” demonstration by the end of this year.

Hyperloop One’s test comes one day after the firm changed its name from Hyperloop Technologies and announced $80 million in new funding in addition to the $11.1 million it raised in 2015. The firm also announced several partnerships with technology, engineering and logistics companies, as well as that it’s engaging in feasibility studies in California and Europe.

Should a commercial version of the Hyperloop ever exist, it could revolutionize how we think about travel, business and even the very concept of physical distance. Hyperloop proponents like to say the system could make it possible to travel between San Francisco and Los Angeles, a trip that takes close to six hours by car, in a half an hour. If that is true, it could have a radical impact on both cities, perhaps turning the Los Angeles area into an extension of Silicon Valley over a long enough period of time. And that’s just one example.

To be sure, Hyperloop One’s test far from proved that the Hyperloop is a realistic idea. It’s about equivalent to NASA testing rocket engines on the ground. Doing so provides valuable data, but it’s not the same as using those engines to deliver a payload into orbit. Even if the Hyperloop is proven technologically feasible, it will face numerous other challenges. Regulatory hurdles will be an issue, as will cost. Early estimates suggested that San Francisco to L.A. route might require $6 billion to build. Some observers regard that figure as highly optimistic.

Still, Hyperloop One is touting the test as evidence that it will be the first company to construct a commercially successful Hyperloop. That distinction is important. Transportation history is littered with concepts that, while technologically impressive, failed because they didn’t make money. (Hello, Concorde.) “We can assure you that we’re the one company that’s ahead of all the others in executing on this vision,” said CEO and former Cisco President Rob Llyod at a preview event before the test.

Llyod’s comments were a direct shot at Hyperloop Transportation Technologies, or HTT, a separate firm working on a Hyperloop system of its own. The two firms are increasingly viewed as contestants in a race to bring an economically viable Hyperloop to market. Whereas Hyperloop One has a more traditional corporate structure, HTT is betting the farm on a model that looks more like a highly organized volunteer effort. HTT announced Monday that it had licensed a form of magnetic levitation technology that it says will result in a more energy-efficient Hyperloop design.

Which of the two firms will win this race — or if the race is won at all — remains to be seen. And looming over all of this activity is Musk himself, who has so far only been involved in the Hyperloop from a distance. But the SpaceX and Tesla CEO is not known for his hands-off approach. Should one Hyperloop company begin to emerge as a strong leader, it’s likely that Musk will emerge from the shadows to give a final push. 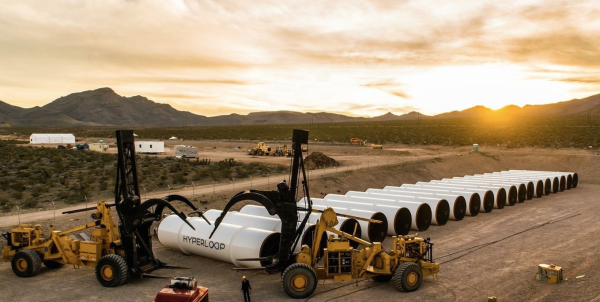 The Race to Build the Hyperloop Just Got Real
Next Up: Editor's Pick