Hillary Clinton speaks with voters at the Mug and Muffin Cafe on May 9, 2016 in Stone Ridge, Virginia.
Win McNamee—Getty Images
By Philip Elliott / Louisville, Ky.

Hillary Clinton is really trying to connect with the working class voters who have proved so elusive to her campaign.

The former Secretary of State merely mentioned her work on children’s issues at “the university” during a meeting with working parents in Lexington on Tuesday, leaving out the Ivy League law degree she earned at Yale. She told a crowd in Louisville later in the day that she often found that when daughter Chelsea was sick, her sitter was as well, and it was a nightmare finding childcare. Never mind that Clinton, at the time, was working as the first female partner at the storied Rose Law Firm. And when discussing her pledge to defend Obamacare, she slipped into a good ol’ gal voice: “If it ain’t broke, don’t mess with it.”

Such is the task for the former First Lady, former Senator and former Secretary of State: to not scare away potential voters with her resume that has few peers. As she is inching closer to officially becoming the Democratic nominee—even loss on Tuesday night in West Virginia wouldn’t be enough for rival Bernie Sanders to overtake her in the delegate race—Clinton is trying to be more of-the-people. She’s trying to channel her husband’s innate ability to convince these voters that she feels their pain and is here to help.

“We cannot keep saying families need to buckle down and tighten their belts. Belts are about as tight as they can get for the vast majority of families,” she said in announcing a childcare proposal that would cap costs at 10% of a family’s income. “Something’s gotta’ change.”

Clinton, to be sure, has a long way to go before she convinces anyone she’s a regular American. Her family has become wealthy after Bill Clinton’s eight years in the White House. The Clintons can set their price, and people will pay it. In the 16 months after she left the State Department, she earned $30 million—or the household income of 577 average American families.

But Clinton has never been average by any measure. That’s almost impossible for someone who is poised to become the first woman ever nominated as a major party’s candidate, never mind a figure who could become the first woman elected to the Presidency. What she lacks in campaign polish she makes up with a wonk’s understanding of policy and hard work. Presumptive nominee Donald Trump holds mega-rallies, while Clinton convenes small group discussions to dive into the weeds of policy. And her technically superior campaign is ready to run circles around presumptive Trump if he doesn’t get his act together and stop feuding with fellow Republicans.

Clinton is also still working to surpass the devastating assessment then-rival Barack Obama leveled against her eight years ago: “You’re likable enough.” This time, Clinton is going to prove she is, in fact, likable—and worthy of the vote.

But it’s an effort. Where Trump brags about his vast wealth, Clinton does her best to act like the next-door neighbor. She joked to a small group of working parents in Lexington that her daughter Chelsea had to re-teach her how to handle a newborn when granddaughter Charlotte was born. “I’m learning how to swaddle a baby. That’s an art form,” Hillary Clinton laughed in Lexington.

A few hours later, she was making small talk with patients at a community health clinic in Louisville. “I love this color,” she gushed, trying to relate to these women. “I have a couple of things in this color.”

And then she sounded like a woman bored by her spouse. “My husband was at Morehead State the other day and he can’t stop talking about it,” she said, an eye roll implied in her voice at a campaign rally at Louisville Slugger Field. She later decried the wage gap for women with a laugh-line about shopping. “I can tell you as woman who has shopped for most of her life, I have never gotten a discount at the cashier,” she said. Women are still paid less than men in this country, and Clinton turned to a well-landed jab to make the point.

And by the end of the day, she was back with little Charlotte. “Those of you who have grandchildren know you are just obsessed with them. It’s kind of weird,” she said. “You just sit there and stare at them.” No one could doubt her sincerity.

Clinton’s allies are trying to cast the former Secretary of State as a competent and capable contender in the face of Trump’s theatrics. “I don’t know that I’ve ever seen a better resume for President of the United States than Hillary Clinton,” Louisville Mayor Greg Fischer said. “We need a serious candidate.” Clinton is adding one quality: relatable.

It’s a risk, for sure, in a year that has seen voters reject more traditional candidates with impressive resumes. Senators and Governors found themselves easily dispatched by Trump during the primaries, and that feeling might continue into the general election. Civility actually has cost candidates votes against the billionaire blowhard, and a head-to-head contest will test what Americans want, let alone tolerate. Clinton is betting that she can disqualify Trump, if not be more likable than he is.

“Donald Trump actually stood on a debate stage and argued that Americans are paid too much, not too little,” Clinton said. “It’s troubling to me because if you’re going to grow the economy, it’s kind of obvious that you want people making money.” In Clinton’s telling, she alone can protect those voters’ pocketbooks and like it in the process. 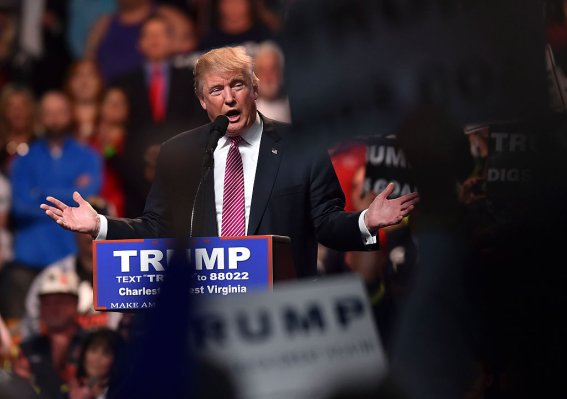