Newt Gingrich, former speaker of the U.S. House of Representatives, speaks during the 41st annual Conservative Political Action Conference at the Gaylord International Hotel and Conference Center in National Harbor, Md., on March 8, 2014.
T.J. Kirkpatrick—Getty Images
Ideas
By Kirsten Salyer
Kirsten Salyer is a writer and the former Deputy Editor of TIME Ideas

As speculation about the Republican National Convention continue to bubble, TIME called former Speaker of the House Newt Gingrich, one of the most vocal advocates for uniting behind Donald Trump.

TIME: Why should the Republican Party rally around Donald Trump?

The nature of team sports is that you’ve got two teams. You have the Hillary Clinton left-wing-radical, labor-union team, and you’ve got everybody else. And everybody else broadly are called Republicans. And the team leader they picked to put on the field is called Donald Trump.

There were millions of people who were involved in that process, and he is clearly the legitimate nominee. He will get more primary votes than anyone in history.

What do you think of Republicans, including former Gov. Mitt Romney and House Speaker Paul Ryan, who have not supported the presumptive GOP nominee?

Romney, like the Bushes, has been actively hostile. George W. Bush and George H. W. Bush, when they got to be the nominee, they expected everyone to fall in line. Now that it’s their turn, they’re doing the opposite.

Ryan has asked for more answers. In his case it was a mistake to do it. The majority leader and the whip have both signed up to support Trump. So Trump is gaining ground every day. But Ryan is a serious guy. I hope he and Trump have a successful meeting this Thursday.

Jeb Bush has said: “Donald Trump has not demonstrated that temperament or strength of character. He has not displayed a respect for the Constitution. And, he is not a consistent conservative.” Why is Bush wrong?

In one of your recent Facebook Live videos you mentioned that one of the key things Trump could do to win over Republicans is to deliver a well-thought out speech on the kind of judges he would appoint to the Supreme Court. Why is that a good strategy?

Why do you think Trump will be a good president?

I think he has the potential to be an extraordinarily dynamic president who shakes up a bureaucratic city that badly needs to be shaken up. I think that the bureaucracies in Washington have gotten the attitude that they run the country, not that the country runs them. And I think in a free society, that’s very unhealthy.

I think it would be very good to have a president who came in and challenged all the current assumptions. I’m actually working on a paper now on why I think his call for rethinking our foreign policy is totally legitimate. And I really think we have to be realistic about that stuff. It’s been 14 years since 9/11. We’ve spent trillions of dollars, over 4,000 lives and over 50,000 severely wounded, and we’re not winning. That’s a place to say: don’t we need a national debate?

Hillary wanted to replace the dictatorship in Libya. Well she got rid of Gaddafi. Now it’s a total mess. She wanted a new deal with Russia. That new deal led to seizing Crimea, then part of Ukraine and putting Russian forces in Syria. Is that a success?

I think those kind of honest, legitimate questions pushing the national system and arguing that we need to rethink what we’re doing is exactly what we need in the near future.

Is there anything else he should do on foreign policy?

He’s been very clear about the need to rebuild the American military. I think that’s a good example. Our current trajectory for the Navy would leave it too small to do its job. It would be physically impossible to do its assignments around the world if we kept shrinking it at the rate that Obama has us shrinking.

What do you think of Trump’s recent comments about the national debt?

He clearly made a mistake in his initial comments. Because the Constitution says the debt should be honored. He came back in 48 hours and said he would take the debt as a principle that he would honor. Remember, this is a businessman who has entered politics. This is not a professional career politician. He’s going to make a lot of amateur mistakes. But I think he’s going to learn very fast.

You’ll get a lot more learning curve with Trump than with Hillary and he will meet it. She’s been doing this since 1972 when she first worked with the George McGovern campaign. He’s been doing it since last June.

Are there any issues that you think should be getting more attention?

I just ran across this yesterday so I’m probably enamored, like people who find a new shiny penny. But I ran across a study that the Clinton Foundation pays men 38% more than women. I think that is so impossible for Hillary to defend, and I think every Republican should say it in their speech.

By contrast, the first woman to be in charge of building a high-rise building in New York worked for Donald Trump.

The more we get into this, the more fun it’s going to become.

Some have argued that at this point in the campaign, Trump needs to get more serious. What do you think?

What do you think it is that’s been most effective about it?

People sense that what you’re getting is the real Donald Trump. Whether he’s right or he’s wrong, whether he has to learn new facts or he already knows them, you feel like you’re not getting a trained, programmed, computerized, consultant-driven phony who makes up whatever he has to.

Would you accept vice president if offered?

I’m not going to get into that. I think that’s very unlikely. There are many good potential candidates.

What should Trump look for in a vice presidential candidate?

I think there are three characteristics: Is it a person who could actually be president if something happened to the president? Are they compatible in their ideas and attitudes, could they work together as a team? And third, do they do at least a little bit to help win the election. I think you think of them in that order and they have to pass each of the three tests.

What would you like to see moving forward for the Republican Party?

The question is: can we between now and Cleveland pull the party together to have the unity convention in Cleveland? That would be very helpful. But I think it has to be unified around the winner. And a lot of folks in the Washington establishment seem to think that the way to get unity is to pretend that they won and he lost. That’s not going to happen, and it shouldn’t. His voters voted for him to change things; they didn’t’ vote for him to go and kiss and make up with the people they want to change. 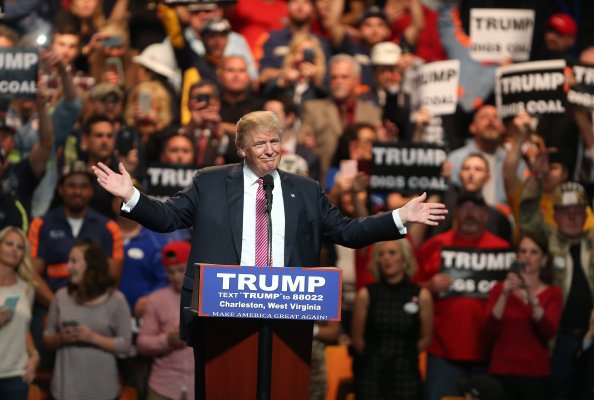 How Donald Trump Can Unify the Republican Party
Next Up: Editor's Pick