Colin Farrell attends The Irish Film Board and IDA celebrating the success of Irish cinema on February 24, 2016 in West Hollywood, California.
Michael Kovac—Getty Images for Irish Film Board
By Eliza Berman

Colin Farrell has about “four or five different scenarios” for how to read the open-ended finale to his new film, The Lobster, the English-language debut of Greek filmmaker Yorgos Lanthimos. Though it isn’t possible to list them without spoiling the movie, suffice it to say that they paint alternating scenes of self-deception, trickery and heartbreak. For Farrell, the ambiguity of that final moment was one of the chief draws of the supremely unique project, and he’s eager to engage on all manner of interpretation as the movie hits theaters on May 13.

In The Lobster, the Irish actor looks a little different than we’re used to seeing him: He has a bit of a paunch, a decidedly un-hip mustache and an overall appearance that might be described as borderline schlubby. As David, a man whose wife has left him, he is forced to check in to a seaside hotel where he has 45 days to find a mate. If unsuccessful, he will be turned into an animal of his choosing, hence the movie’s name (lobsters, as David notes, live 100 years, are extremely fertile and blue-blooded, like aristocrats). When he takes to the forest in an attempt to escape the rigid regime of the hotel, he finds a similarly austere environment among the Loners there—as well as a possible mate, played by Rachel Weisz.

Farrell and Lanthimos found their partnership so rewarding that they’ve already announced plans for another project together, The Killing of a Sacred Deer, which starts production this summer. And this fall, Farrell will join the wizarding world as Percival Graves in the Harry Potter prequel Fantastic Beasts and Where to Find Them. As he gears up for a busy second half of 2016, Farrell talked to TIME about why he chose to pack on the pounds for The Lobster and how J.K. Rowling’s world of magic stacked up to his expectations.

TIME: What was your immediate reaction when you read the script?

Colin Farrell: I had been prepped by seeing Yorgos Lanthimos’ Dogtooth about three or four years prior. I found Dogtooth very disturbing and provocative. So I was very intrigued, knowing that it was his first English-language film, to see how his sensibility would translate—not that I would quantify what his sensibility is. I was confused by the script and a little bit disturbed by it, but ultimately moved by the end of it. Rachel’s character and my character were just so bizarre, I don’t imagine that I’ll ever do a film that’s more unusual than this. Possible, but I don’t imagine.

People seem really eager to ascribe some meaning to the movie, which is a natural reaction to any piece of art, but it seems like this one really resists that.

It certainly defies any expectation. Allegorically, I can see how you can draw so many lines of comparison between the corruption of rigid systems, whether it’s political ideologies or religious dogma, whether it’s the hotel in the first part of the film or the forest in the second half. They’re both as corrupt as each other. Also the nature of aloneness, and what we’ll do to avoid our aloneness at any cost, whether we’re told by society that you have a stigma if you’re alone when you’re 30 or 35 or some internal dynamic that renders us not want to walk this path with just ourselves. Yorgos and [his co-writer] Efthymis [Filippou] are too limitless in their potential as creators and also too respectful of the audience to try and say, “This is what you should feel, this is what it’s about.”

Your character David is a tough nut to crack. How did you find a way into his head?

It was such good writing that I didn’t make any definitive choices about what he was like. Yorgos didn’t say, move that way or speak that way. We spoke about his physicality. I was into the idea of separating myself from what I’m physically more used to being in life and in film because it was such a departure from anything I had done. It’s really nice to play a character that has no heroism, no guile, nothing subterfuge about him.

Some people have described the character as “against type” for you. Do you see it that way, or is that whole notion a little offensive?

No, you could see it as reductive but thankfully I don’t take that as offense. I can see why people would say that. I can look at my body of work, I’ve done a lot of action films, particularly in the first half of the last 15 years. But I don’t think this character, at least on the page, is anyone’s type. There are certainly actors who would be less against type than me, but that just means we’re eschewing convention.

It’s easy to come away and say that this film takes a cynical view on human relationships, but did you ultimately find it romantic?

I did, actually. I found this kind of bizarre sweetness between Rachel’s character and my character, these little games they play. It’s hard to not find a sweetness in the puerile. Amongst all the violence and abstraction I found it to be this really sweet unconventional romance at the end of it.

With respect to another fantastical universe we’ll be seeing you in—were you a fan of Harry Potter before you were cast in Fantastic Beasts and Where to Find Them?

The films. I never read the books, but very much the films.

What was it like seeing the behind-the-scenes world of wizardry. Does it take away from the magic?

It was beautiful. Not at all. There’s a part of me that’s a really big kid so if anything, it adds to it. To see the beauty of the sets and the prop rooms with all the wands, this accoutrement and that accoutrement, was pretty extraordinary.

Did you get any advice from J.K. Rowling?

No, I never met her. She was there but my schedule was patchy so the days she was there I didn’t happen to be there. But [director] David Yates was a wealth of information. He’s done four of the last films. He has such a high regard for the mythology and the lore of this world and knows it inside and out. He’s always mining for emotional truth, saying, “Forget that we’re wizards and forget that there’s magic.” He’s brilliant that way, because you know the magic will take care of itself. 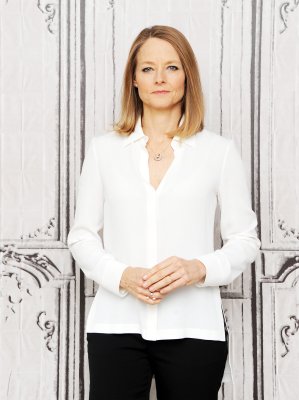 Jodie Foster on Money Monster and Why It's Finally Her Time to Thrive Behind the Camera
Next Up: Editor's Pick