Planet-hunting is not exactly a growth industry in our solar system. The last time we spotted a new world orbiting our sun was in 1930, when amateur astronomer Clyde Tombaugh discovered Pluto—which wore the planet designation only until 2006, when it was busted down to a mere dwarf planet. Last January, astronomers from Caltech announced they had evidence of a new Planet Nine, but while it may well be out there, no one’s seen it yet.

If planets are in short supply close to home however, across the rest of the galaxy they’re enjoying a boom market. According findings NASA announced at a midday press conference today, astronomers working with the Kepler Space Telescope have added 1,284 new exoplanets to the roster of known worlds orbiting stars other than our sun. That’s on top of 984 other exoplanets already confirmed, as well as 1,327 others that are considered likely, but not yet validated.

Most important, of the newly confirmed planets, nine qualify as the most sought-after type of all: ones less than twice the size of Earth—which means they likely have solid surfaces—orbiting their stars in the so-called Goldilocks zone, where the temperature stays within the not-too-hot, not-cold-cold range for liquid water to exist. If life as we know it is going to emerge anywhere in space, planets like that are the first place to look.

The newly announced planets were discovered by a combination of precise optics and smart arithmetic. The Kepler telescope, which was launched in 2009 and is now in the slow wind-down phase of its mission, has searched for planets by staring unblinkingly at 150,000 stars—a tiny sampling of the 300 billion or so in the Milky Way—looking for the slight dimming of light that occurs when an orbiting planet crosses its face.

That method, however, can yield false positives in a number of ways, especially if a star is actually a part of a binary system and the dimming is caused by its partner star. “There are a lot of scenarios that mimic the transiting planet signal,” said Princeton astronomer and Kepler researcher Timothy Morton in a press conference announcing the new finds.

Eliminating the impostors has historically involved follow-up sightings, which can be exceedingly slow and painstaking. Morton has streamlined this process with a new computer model that factors together the strength of the transiting signal, the size and color of the star, the overall population of stars of that type already known to have planets, the overall stellar population of the galaxy and more. Taken together, these x-factors can determine the likelihood that a possible planet is a real planet to within a certainty of 99%. Only the ones that meet or exceed that threshold make the confirmation cut—and the 1,284 just announced did.

“Kepler is interested in statistics,” said Natalie Batalha, Kepler mission scientist at NASA’s Ames Research Center in Moffett Field, California. “We are searching the galaxy to see how far we have to look to find potentially habitable planets.”

That statistical approach means that not only is the 1,284 number bigger than it seems—since it is surely just a small representative sample—so too, is the population of nine new earth-like planets, which themselves joined a rarefied list of 12 other such known worlds. Habitable planets can be missed entirely not just because their small size, but because they may orbit at an angle relative to the Kepler telescope that makes them appear to pass above or below their parent star, thus not causing any telltale dimming.

“There can be many, many more planets than they’re seeing because the transit is not in the ecliptic relative to Earth,” says Batalha.

Follow-on telescopes including the Transiting Exoplanet Survey Satellite (TESS) and the James Webb Space Telescope (JWST) which will be launched in 2017 and 2018 respectively, will look for those and other worlds, and Webb particularly may be able to analyze the atmosphere of any earth-like planets that have them, looking for telltale signs of biology like water, methane and carbon dioxide.

Humanity’s great cosmic mystery—whether we’re alone in the universe—is still unresolved. But what the 1,284 new planets make clear, is that there surely plenty of worlds out there where life as we know it could find a comfortable home. 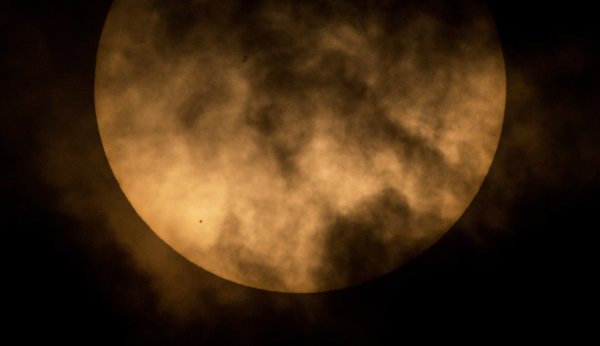 This Photo of Mercury in Transit Across the Sun Is Haunting
Next Up: Editor's Pick