Laura Bush and Jenna Bush Hager have special connections to the National Parks. Bush hikes in various parks with friends and serves as an honorary co-chair of the National Park Service Centennial (along with First Lady Michelle Obama). And Bush Hager’s husband Henry Hager proposed to her on Cadillac Mountain in Acadia National Park. The mother-daughter teamed up for Our Great Big Backyard. TIME spoke with the former First Lady and the NBC correspondent.

TIME: Why did you decide to write this book?

Bush Hager: I wrote this book actually on maternity leave with my youngest baby, Poppy. Ask any nursing new mother—you’re very nostalgic and you think about what you want for your children. With the rise of technology, and with the way that world is shifting—which isn’t a bad thing—the one thing I didn’t want to happen was for my kids to lose the appreciation for being outdoors and being creative and using our imaginations. And so the book was birthed right after I birthed my child.

Bush: Jenna and I wrote Read All About It! together a few years ago and we had been talking about doing another book for a while. When we realized it was the centennial of the National Park Service, we thought it’d be fun to do a book about children visiting our National Parks.

You are a park fan yourself, right?

Bush: I am a park fan, and Mrs. Obama and I are the co-chairmen at the centennial celebration for the National Park Service. I hiked in a national park every single year that we lived at the White House with childhood friends of mine. And we still do it, we still visit parks together.

What is your hope for our national parks in the coming decades?

Bush Hager: We should really take care of our world, our country, and we should visit them. The National Parks are these unbelievably sacred, beautiful places.

Bush: Our National Parks are really in pretty good shape, although I did just read in the newspaper that they are underfunded. That’s of course a congressional role, so I hope they’ll make sure [to do so] if there’s a backlog of things that need to be done in our national parks. Of course many of our National Historic Sites are part of the Park System. The White House, for instance, is a National Park—you might not know that the gardeners at the White House are National Park employees.

How can we get more young people excited about exploring the great outdoors?

Bush Hager: I know it sounds sort of cliché and it also makes me sound really old—but we would get home from school and we would go play outdoors until dinner. We would ride our bikes, we would explore.

Bush: Parents can do that by taking their kids outside to do things like George did with Barbara and Jenna when they were little—going on night walks, which were always very exciting for them to go out and walk with their dad in the dark.

Mrs. Bush, do you and your husband ever get out into the wilderness for a hike or a picnic?

Bush: No, not really. We go for walks. George calls me an “urban hiker” now because I walk with my friends in Dallas in all different neighborhoods. We’ll choose a neighborhood and walk through. But he and I don’t do that that much together, since he’s actually had his knees replaced now. He was a runner until he ran his knees out, but he’s in good shape. Now he’s a bike rider.

Jenna, does Poppy have a great bond with her grandfather, whose childhood nickname was Poppy?

Bush Hager: Well, my grandpa was really sick when I was pregnant with Mila three or four years ago. He was really sick and I was largely pregnant, and we went to say goodbye to him. Really, we thought he wasn’t going to live. I remember he touched my stomach and said, “There’s life, and then there’s death.” I thought that my girls weren’t going to get to meet this man who is such an important part of my life. And then it turns out that he did live, and got to meet Mila, and now has held baby Poppy and has gotten to meet Poppy, and that was such a beautiful moment. We’re going to spend his birthday in Maine and we’re taking the girls, so they’ll get to hang out some more.

What’s your advice to the Obama girls as they prepare to leave the White House?

Bush Hager: They need none! They are such remarkable girls—they’ve done such a terrific job. We were lucky enough to be in college—I guess, “lucky enough”—but they’re in high school and they’ve taken advantage of the amazing opportunities, which is what our hope for them was, to travel and see the world, which they’ve done. I think that they’ll just do it with grace, the way that they led the last eight years.

Mrs. Bush, what’s your advice to Mrs. Obama as she prepares to leave the White House?

Bush: I don’t know what advice to give her, I’m sure she’ll do great. I’m sure they’re both looking forward to the next part of their life. It goes so fast—it’s sort of shocking how time flies. It’s hard to believe that we’ve actually been home almost eight years, eight years in January, and their time in the White House has seemed really fast.

What were the ups and downs of leaving?

Bush: There are trade-offs of course. It’s great to have your own house and be back into private life, but on the other hand, it’s such a huge privilege to get to live in the White House, and I know [the Obamas] think that. The hardest part is saying goodbye to all the friends you’ve made in Washington, the people you’ve met [who work] at the White House from president to president, the butlers and the ushers, everyone we already knew well because we visited the Bushes when they lived there.

What have been some of your favorite books that you’ve read recently?

Bush: All the Light We Cannot See. I loved that one. I re-read Chernow’s Hamilton after I saw the play. It’s such a great, readable biography, I can see why it’s making such a great play, or musical.

Bush Hager: Right now I’m reading Modern Lovers, which comes out soon. I read probably a book a week because I travel so much, which is so awesome. Like everybody else I read The Nightingale, which I loved, and Euphoria by Lily King I thought was really beautiful. One of the fun things about having a librarian as a mother—my sister’s also an incessant reader, my dad too, but he reads more biographies and we’re fiction fans—is that we can recommend books to each other all the time. 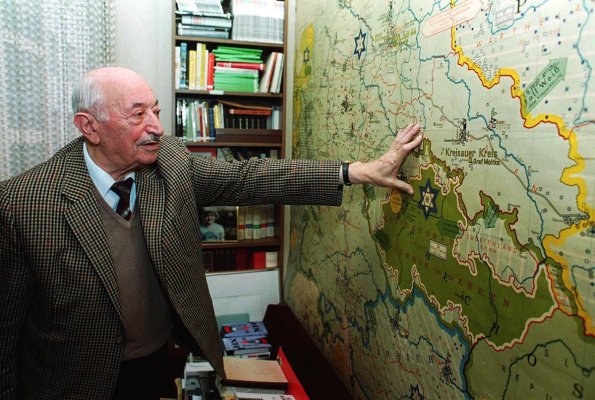 What Nazi Hunters Reveal About the Way We See History
Next Up: Editor's Pick