Now You Know: Where Was the Original 'Smoke-Filled Room'?

Nowadays, the “smoke-filled room” is mostly just a metaphor—but there was a real room that started it all. Well, sort of.

The compelling image of the smoke-filled room, a “place of political intrigue and chicanery, where candidates were selected by party bosses in cigar-chewing session,” per William Safire, arose during the 1920 Republican convention. That year, Sen. Warren G. Harding of Ohio was the come-from-behind nominee for president, selected after ten ballots. According to historian David Pietrusza, author of 1920: The Year of the Six Presidents, the room in question is often credited with the phrase “because the people who come out of the room, one of them certainly brags about it, and how they put over Harding.” The storied conference took place in a room in Chicago’s Blackstone Hotel.

But, Pietrusza says, that room probably gets too much credit. There were other reasons that contributed to Harding’s success.

That year, the Republican Party came into the convention with a slew of candidates, none of whom had enough delegates to win the nomination. The initial rounds of voting showed two very evenly matched front runners for presidential nominee: Frank Lowden, Governor of Illinois and Leonard Wood, an Army general. Senator Hiram Johnson was in third place, but although he enjoyed popular support in the primaries he was too radical for many in the Republican party, having helped form the Progressive party a few years earlier. As a result of the votes being split, none of the front runners were close to securing the necessary number of delegates when the convention adjourned after its first four ballots on the evening of June 11, 1920.

Many meetings took place that night but one gathering, composed primarily of Republican senators, took on mythic qualities—though the discussion was not exactly the highly orchestrated secretive conclave of party heavyweights that the phrase “smoke-filled room” has come to imply. Instead, it was a very disorganized meeting into which people could easily wander. And the meeting, at which the senators decided that they’d vote for Harding in order to break the impasse, didn’t even lead to his immediate nomination. It would take all day for his tiny incremental progress to push him into real contention on the ninth ballot, which came after another multi-hour recess. During that vote, Lowden, who had been in the lead previously, freed his delegates to vote for other candidates. Harding jumped into the lead for the first time. He won on the next ballot.

“Basically the convention goes naturally to Harding because there’s nobody else,” Pietrusza explains. “[Harding biographer] Andrew Sinclair called him the available man.”

But that didn’t keep observers from guessing that something nefarious had gone on behind closed doors. In 1955, historian Wesley Bagby wrote that choosing Harding instead of any of the three leaders “led immediately to extensive speculation as to the men or forces responsible.”

“Anytime you get a situation where it’s going to be close, somebody’s going to sort it out and there will be either rumors or actuality of people maneuvering in the back room,” Pietrusza agrees. There are only so many ways to resolve a deadlocked vote, and choosing an entirely different person—someone who may later seem to have come out of nowhere—is an effective option. He also notes that the idea of a dark-horse candidate, who comes from behind having never been expected to win, far predates Harding’s nomination: that’s been around since James K. Polk’s 1844 nomination, after Polk was initially a potential vice-presidential candidate.

MORE: This Graphic Shows What Happened at the Last Real Brokered Convention

As for the phrase itself, it’s not fully clear who first used it. At the time, newspapers frequently cited Harry Daugherty, Harding’s campaign manager and later his attorney general, as having predicted that Harding’s time would come “about eleven minutes after 2 o’clock on Friday morning at the convention, when fifteen or twenty men, somewhat weary, are sitting around a table [and] some one of them will say: ‘who will we nominate?'” as a New York Times piece from Feb. 1920 quoted him. A variation on that quote—with the crucial tweak: “around a table in a smoke-filled room”—made it into popular parlance, but Daugherty later denied having said it and probably wasn’t the actual source of the quote.

Safire traces the phrase to Kirke Simpson, an Associated Press reporter who filed a story at 5 a.m. on June 12 which began “Harding of Ohio was chosen by a group of men in a smoke-filled room early today as Republican candidate for President.” Interestingly, the New York Times ran an article before Harding’s nomination about the Republican party platform having been drafted “last night by a few men in a smoke-filled room.” The description was likely factual, given the prevalence of smoking at the time, but it doesn’t have the negative connotations that quickly attached to the phrase.

No matter who introduced the phrase, newspapers did emphasize the role of overnight deliberation in their initial reporting on the nomination, and the phrase and idea it conjured captured media attention as a way to understand Harding’s unexpected selection and to condemn it. The convention was called “the final breakdown of the American primary system so far as selecting presidential nominees is concerned” and one writer in Baltimore’s The Sun wrote searingly of “the smoke filled room and the sleepy Senators between 2 and 3 o’clock in the morning.” Harding’s opponent in the general election, James Cox, also disparaged the ‘smoke-filled room’ while campaigning.

Though smoke-filled back rooms may still be fodder for popular speculation and worry, they’re much less likely to actually make a difference in presidential nominations these days. In the years before the primary system we’re now familiar with solidified in the 1970s, brokered conventions—ones where there was a lot of maneuvering left to be done before a nominee could be agreed upon— weren’t uncommon. Generally, delegates were chosen at state conventions and were unbound, so they would do as they were told by in-state influencers. Or, non-binding “beauty contest” primaries let people express their preferences in a nonbinding way. Changes to party rules and the rise of binding primary races all contributed to the decline in the frequency of contested conventions—and in the power of the smoke-filled room. 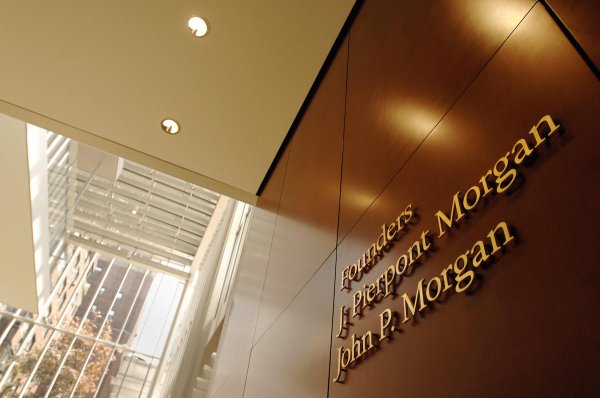 The Mysterious Woman Behind J.P. Morgan's Library
Next Up: Editor's Pick