Why People Are Blown Away By Siri’s Cousin, 'Viv'

For Dag Kittlaus, creating Siri was just the beginning. The technology entrepreneur who developed the famous voice assistant before selling it to Apple in 2010 showcased his new intelligent assistant, called Viv, at TechCrunch Disrupt on Monday.

Based on Kittlaus’ demo, Viv is capable of answering complex questions, an area where some virtual assistants have struggled thus far.

The idea behind Viv is to make it as simple as possible to accomplish tasks through speech. Rather than just fetching recent weather forecasts, for example, Viv is said to serve up data pertaining to specific times and conditions. When Kittlaus asked Viv whether it would be warmer than 70 degrees near the Golden Gate bridge past 5 p.m. the day after tomorrow, the AI-powered assistant fetched data from Weather Underground almost instantly.

Saying a command like, “Send Adam $20 for the drinks last night,” will prompt Viv to launch Venmo and send the cash to the correct contact. The user doesn’t need to tell Viv to open Venmo and search for the right person; it just takes one sentence, as Kittlaus showcased on stage.

Viv is able to do this thanks to a technology called dynamic program generation, which essentially means the program is capable of writing its own software specific to a received request. Other AI assistants are programmed to respond a certain way when it’s determined that the user has searched for something like a movie, according to Kittlaus.

Viv will start rolling out toward the end of the year in apps and “other things” the company has worked on with its partners. Kittlaus couldn’t offer specifics when TechCrunch Editor-in-Chief Matthew Panzarino asked which types of devices and apps we can expect to see Viv embedded in.

He did, however, make broader statements around how a virtual assistant knows you and lives in the cloud could be beneficial. Kittlaus described a scenario in which a user would be able to simply scan their thumb on a new device when setting it up for the first time, and intelligent software like Viv would load their preferences.

While Viv appears to be a powerful and capable virtual assistant, it’s entering an increasingly competitive space. Companies like Amazon, Apple and Google are pursuing similar advancements in artificial intelligence. SoundHound’s Hound app, like Viv, can answer complicated queries. 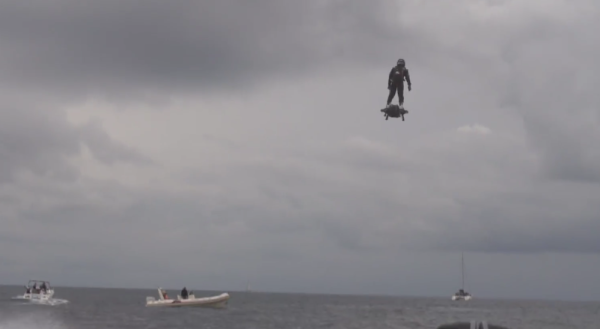 Watch This Ridiculous Record-Setting Hoverboard Flight
Next Up: Editor's Pick