North Carolina Gov. Pat McCrory on Monday filed a lawsuit against the federal government after it warned the state last week to back down from its controversial LGBT law or risk losing millions of dollars in funding. The Justice Department struck back later Monday by filing a lawsuit of its own, arguing that the legislation violates Title VII, Title IX and the Violence Against Women Act.

In a press conference, Lynch said the law known as HB2 “created state-sponsored discrimination against transgender individuals who simply seek to engage in the most private of functions in a place of safety and security.” She went on to compare the legislation to historical backlashes to American progress, including the Jim Crow laws and the resistance to the Brown v. Board of Ed. decision.

Pending ongoing discussions with the state, Lynch said, “We retain the option of curtailing federal funding to the North Carolina Department of Public Safety and the University of North Carolina.”

North Carolina’s suit is the governor’s response to the federal government, which gave the state until the end of the day Monday to say it would not enforce the law that bans transgender people from certain bathrooms, the Associated Press reports. “This is not a North Carolina issue. It is now a national issue,” McCrory said Monday at a news conference.

“I’m taking this initiative to ensure that North Carolina continues to receive federal funding until the courts resolve this issue,” he said earlier in a statement. “The Obama administration is bypassing Congress by attempting to rewrite the law and set restroom policies for public and private employers across the country, not just North Carolina. This is now a national issue that applies to every state and it needs to be resolved at the federal level. They are now telling every government agency and every company that employs more than 15 people that men should be allowed to use a women’s locker room, restroom or shower facility.”

The Justice Department last Wednesday notified the state in a letter that the law violates federal Civil Rights Act protections barring workplace discrimination based on sex. The department’s position is a “baseless and blatant overreach,” McCrory said in the complaint, which was filed in Federal District Court of the Eastern District of North Carolina. “This is an attempt to unilaterally rewrite long-established federal civil rights laws,” the lawsuit says.

“The department’s threat is real but misplaced,” it adds. “North Carolina does not treat transgender employees differently from non-transgender employees. All state employees are required to use the bathroom and changing facilities assigned to persons of their same biological sex, regardless of gender identity, or transgender status.”

McCrory is now calling for Congress to bring “clarity” to the nation’s anti-discrimination laws. The governor also said the government’s intervention affected the “personal privacy” of North Carolina residents. “Our nation is dealing with a new, complex and emotional issue — how to balance the expectations of privacy and equality in one of the most private areas of our lives,” he said Monday at a news conference. “Our nation is one nation, especially when it comes to fighting discrimination, which I support whole-heartedly.”

North Carolina’s bathroom law went into effect in March. McCrory said he asked the federal government for more time to respond but said that request was denied. 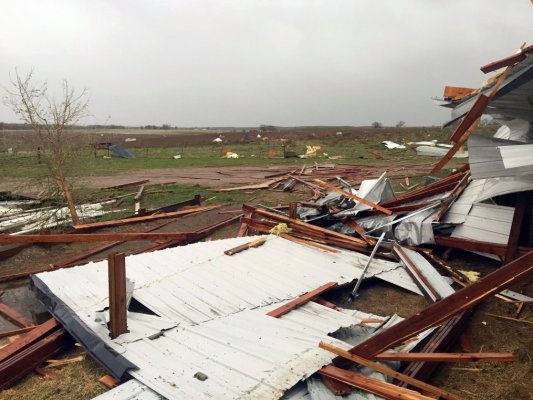 Plains States Brace for Twisters and Large Hail
Next Up: Editor's Pick