Why You Should Care About Mercury's Transit of the Sun

If you like the planet Mercury, you’d better take its existence as an article of faith, because if there’s one thing the little world does, it’s hide in plain sight. Take a look at the nighttime sky and all of the other relatively nearby planets show themselves readily.

Venus is sometimes so bright it’s mistaken for an incoming airplane. Mars is so distinct we can even make out its blood red color. As for Jupiter and Saturn, well, just try not to see them. Apart from the moon they can be the most distinct objects in the sky.

But Mercury? Practically invisible—except for this week that is. On Monday, Mercury makes a seven-hour transit of the sun—from 7:12 a.m. E.T. to 2:12 p.m. E.T.—appearing as a black speck creeping across the solar disk. If you want to see it, you can watch our livestream above, or you’d better get yourself to a properly filtered telescope (staring straight at the sun: not good) fast, because the transit happens only 13 or 14 times a century. Here’s why—and here’s why you should care.

Mercury has gone by a lot of different names in its very long history. The Assyrians called it “the jumping star” (in Assyrian, of course); the Greeks called it Stilbon (or “The Gleaming”); the ancient Chinese called it Cheng Xing, or The Hour Star. But the winning name came from the Romans, who named the planet after Mercury, the messenger of the gods, as a nod to the fleet path it makes across the heavens.

Earth takes 365 days to make one circuit of the sun—which is how we measure our year. Mars, one slot out on the planetary race track, takes 687 days. If you lived on Neptune, your year would be nearly 165 Earth years. Mercury, by contrast, zips around the sun once every 88 Earth days.

That’s more than four revolutions for every one Earth makes—which means that we ought see at least four Mercury transits a year, as the planet laps us again and again. But speed isn’t the only thing, inclination counts too.

The Earth orbits the sun more or less in the flat, staying roughly in the sun’s equatorial plane. Mercury’s orbit is tilted seven degrees relative to Earth’s, which means that most of the times it passes the sun, it appears to us to be moving above or below it as well—which eliminates the transit effect. It is only when Mercury’s orbital plane intersects Earth’s orbital plane that a transit becomes visible to us—which is what’s happening now.

So why does it matter? First, because Mercury itself matters. It’s a remarkable little warrior world, one that got clobbered early in its lifetime by a passing planetesimal, unleashing an explosive energy equivalent to one trillion 1-megaton bombs. And yet it survived. It has spent the entirety of its life being blowtorched by the close-up fires of the sun—losing much of its exterior layers and winding up as a sort of planetary shot put, with its iron core making up 75% of its volume. And yet it survived.

So props to Mercury.

More important though, a transit matters because Mercury is so hard to study otherwise. The U.S. and other countries have been throwing spacecraft at planets all over the solar system for decades, with Mars especially humming with active probes. But getting to Mercury is a brutally difficult thing. When you’re firing a probe so deep into the gravity well of the sun and aiming at a target moving 30 miles per second (48 k/s) there are a lot more ways for things to go wrong than right. It’s for that reason that Mercury has been visited only twice: a flyby by the Mariner 10 spacecraft in 1973, and an orbital mission by the MESSENGER probe, which circled the planet from 2011 to 2015. There are no current plans for NASA or any other space agency to go back.

So think of the little planet today, get a properly filtered look at it if you can, and otherwise say goodbye. By late afternoon, The Gleaming will be back in hiding. 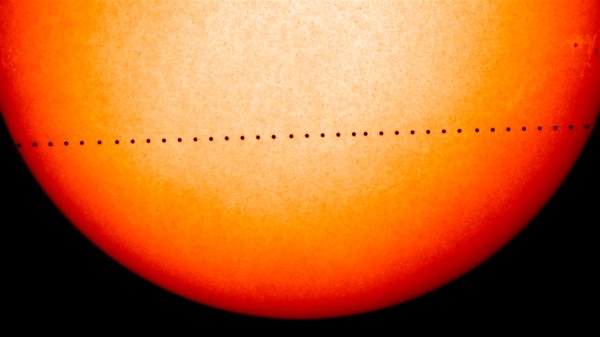 See Mercury's Path as It Crosses in Front of the Sun
Next Up: Editor's Pick