Prince Harry on Monday opened up about how his grandmother, Queen Elizabeth, was excited to help trash talk the White House ahead of the Invictus Games.

The Prince of Wales laughed alongside First Lady Michelle Obama during an exclusive interview with ABC’s Good Morning America, in which the two discussed the royal and light-hearted taunting wars that unfolded on Twitter before the international competition for injured veterans began on Sunday.

Prince Harry had enlisted the help of the Queen to record a video in response to the Obamas warning they would “bring it” at the Games. The Queen can be seen dismissively saying, “Oh really? Please,” to the couple before Prince Harry drops the mic.

But the 90-year-old royal needed little persuading after seeing the Obamas’ jab, Prince Harry said. “I showed her the video and she said, ‘Right, what do we have to do?” Prince Harry recalled.

The First Lady also talked about the moment she and her husband were greeted by Prince George in a tiny white bathrobe at Kensington Palace. She said it’s the “most precious thing” to see Prince Harry interact with his nephew, adding that the 2-year-old didn’t understand why his uncle wasn’t speaking as much as he usually does.

Prince Harry and the First Lady also praised those who have served in the military as they discussed the importance of the Invictus Games, an international competition for injured veterans. The contest — which kicked off Sunday in Orlando, Florida — helps give some 500 former soldiers from 14 countries a feeling of camaraderie that may have been lost when their service ended, Prince Harry said.

Obama said the U.S. team was “ready” and “fired up” before she touted the competing veterans as “the best citizens you’ll find.” “Once they take that uniform off, they’re still looking for ways to serve,” she said. “We can’t waste that talent.” 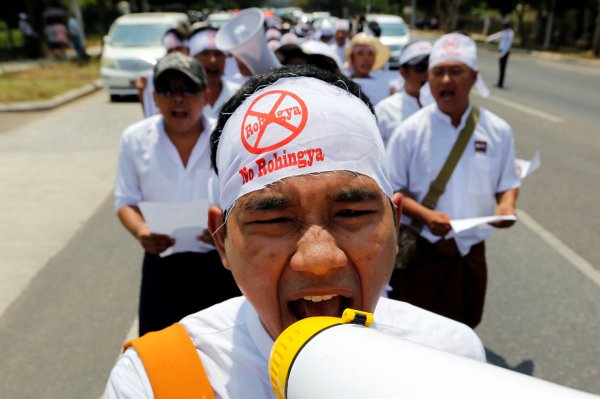 Burma's War on the Term 'Rohingya'
Next Up: Editor's Pick