Sadiq Khan, 45, was declared the new mayor of London in the early hours of Saturday, becoming the most powerful Muslim politician in Europe. A Transport Minister in the Labour government of former Prime Minister Gordon Brown, Khan came under severe attack during the campaign from his Conservative opponent, Zac Goldsmith, for sharing platforms with extremists during his earlier career as a human-rights lawyer.

Fresh from his victory, Khan sat down with TIME on Sunday in his new office in City Hall, a bulbous glass building overlooking Tower Bridge. In these excerpts from the conversation, Khan claims he is the “antidote” to extremism, reveals that the prospect of a Donald Trump presidency might force him to meet U.S. mayors before the end of the year, and explains why he’s campaigning to keep the U.K. in the European Union ahead of June’s In/Out referendum.

You’re the first Muslim mayor of a major western city. Do you feel an extra responsibility to tackle religious extremism?
One of the things that’s important to me as a Londoner is making sure my family, people I care about, are safe. But clearly, being someone who is a Muslim brings with it experiences that I can use in relation to dealing with extremists and those who want to blow us up. And so it’s really important that I use my experiences to defeat radicalization and extremism. What I think the election showed was that actually there is no clash of civilization between Islam and the West. I am the West, I am a Londoner, I’m British, I’m of Islamic faith, Asian origin, Pakistan heritage, so whether it’s [ISIS] or these others who want to destroy our way of life and talk about the West, they’re talking about me. What better antidote to the hatred they spew than someone like me being in this position?

Sadiq Khan, London's newly elected mayor, poses for a portrait in London on May 8, 2016
Laura Pannack for TIME

How do you win around impressionable young Muslims who could be lured into extremism?
You say to youngsters you can be British, Muslim and successful. You point to successful British role models. The biggest export we’ve got is [former One Direction singer] Zayn Malik. The most successful British sports person ever is Mohamed Farah, a double Olympic champion and a world-record holder. Who won the Great British Bake Off? Nadiya Hussain. We can point to, when we speak to young Brits of Islamic faith, successful role models. You can go in to business, you can go in to medicine, you can go to politics, dare I say it. So, when somebody comes along and tries to brainwash them with a sort of nihilistic view of life and say the way to get success in this world and the hereafter is to get a Kalashnikov and go to commit — in inverted commas — jihad is to say, “you know what? That’s not true.”

The Conservatives linked you to extremists in what has been viewed as one of the most vicious campaigns ever waged in the U.K. How did that feel?
My experience in relation to taking on the preachers of hate was saying to them it’s compatible being British, being Western, being Muslim. I’ve experienced the receiving end of this extremism, whether it’s the extremists campaigning against me when I stood for Parliament in 2005 and 2010 and 2015, saying somehow it was haram — sinful — to vote, let alone to stand for Parliament. I’ve been on the receiving end of a fatwa when fighting for equality in relation to same sex marriage [in 2013], so I understand what that’s like.

Do you think London’s reputation has been damaged by such a divisive campaign?
London chose to come out in record numbers, the highest turnout there’s ever been in a mayoral election, and — I say this not with arrogance it is what others have said — the single biggest mandate a British politician has ever received. That shows what a wonderful city we are. We’re not simply tolerating each other — you tolerate a toothache, I don’t want to be tolerated. We respect, we embrace, and we celebrate, which is fantastic.

You accused the Conservatives of using a “Donald Trump playbook.” What’s your view on a potential Trump presidency given his remarks on Muslims?
Clearly [I’ll visit] before January in case Donald Trump wins … Hope, I think, is a good way of persuading people to vote for you, energize and enthuse people. I think to try and look for differences, to try and turn communities against each other is not conducive to living successfully and amicably.

I think Bill de Blasio is doing interesting housing stuff in New York, Rahm Emanuel is doing interesting stuff with the infrastructure bank in Chicago. I want to go to America to meet with and engage with American mayors. If Donald Trump becomes the President, I’ll be stopped from going there by virtue of my faith, which means I can’t engage with American mayors and swap ideas. Conservative tacticians thought those sorts of tactics would win London and they were wrong. I’m confident that Donald Trump’s approach to politics won’t win in America.

Update, May 10: After this interview was published, Trump suggested Khan would be exempt from any prohibitions on Muslims entering the U.S. “There are always exceptions,” he told the New York Times. “I think [his election] is a very good thing, and I hope he does a very good job … If he does a good job and frankly if he does a great job, that would be a terrific thing.”

What would happen to London’s position as one of the world’s leading financial centers if the U.K. voted to leave the European Union?
I think leaving the European Union would be catastrophic for our city. The E.U’s GDP is bigger than China, is bigger than the U.S. We’ve got a market of 500 million people in the European Union. They’re not just a market, they’re our cousins. If you look at London, there are huge social benefits, huge cultural benefits, huge benefits to our security, but the economic benefits are massive. More than half a million jobs in London are directly dependent on the E.U. Sixty percent of the world’s leading companies, including Sony, AIG insurance, China Telecom, have their E.U. headquarters here in London. Half of London’s exports go to the European Union. I’m going to be a Labour mayor campaigning with a Conservative Prime Minister for us to remain in the European Union. It’s crucial going forward.

This interview has been edited and condensed for clarity 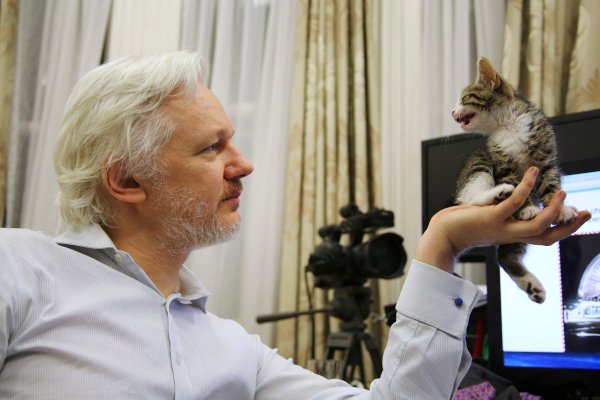 Julian Assange Gets A Kitten to Keep Him Company
Next Up: Editor's Pick