Sarah Palin said in a new interview that she will support a primary challenger to House Speaker Paul Ryan, arguing that the Republican leader has “disrespected the will of the people” by refusing to back presumptive GOP presidential nominee Donald Trump.

“I think Paul Ryan is soon to be ‘Cantored,’ as in Eric Cantor,” Palin, referring the the 2014 upset of the former House Majority Leader, said in an interview with CNN’s Jake Tapper airing Sunday.

Ryan said this week that he’s not ready to support Trump yet. “Conservatives want to know does he share our values,” he said. “There are lots of questions that conservatives are going to want answers to.”

That announcement, which was seen as giving cover to other House Republicans to distance themselves from Trump, was only one of several by high-profile party leaders this week that illustrated the depths of the distrust between the GOP elite and their presumptive nominee.

“His political career is over but for a miracle because he has so disrespected the will of the people, and as the leader of the GOP, the convention, certainly he is to remain neutral, and for him to already come out and say who he will not support is not a wise decision of his,” Palin said. She promised to do “whatever I can” can for Paul Nehlen, a Wisconsin businessman challenging Ryan.

Pressed during the interview on Trump’s previous remarks that Mexican immigrants are rapists and that Muslims should be temporarily banned from entering the country, Palin said: “Who cares?” 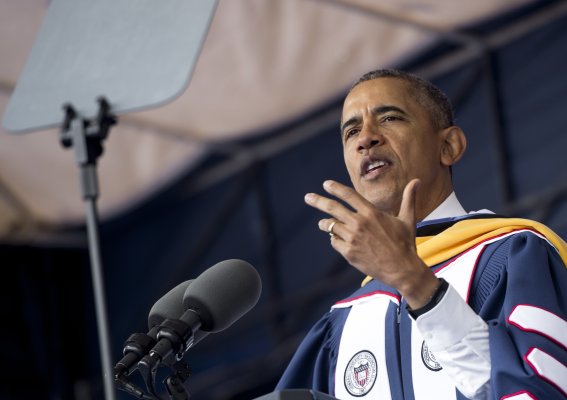 Obama Calls for Hope at Howard
Next Up: Editor's Pick