Here's What Was Inside the First-Ever 'Care Package'

Contents of a CARE Package.
© CARE
By Olivia B. Waxman

Nowadays, when one thinks of a “care package,” one might think of an assortment of treats, luxuries and entertainment sent to cheer up a friend who lives far away. But the contents of the first version did more than that: they were meant to save lives.

The first “care packages” are widely considered to be the ones distributed to World War II refugees 70 years ago, on May 11, 1946, in Le Havre, France, by the humanitarian organization CARE, which back then stood for “Cooperative for American Remittances to Europe” — a coalition of U.S. charities that came together in 1945 to deliver aid to the estimated 60 million Europeans who had been displaced during the war-time period.

The original CARE packages were repurposed from the U.S. Army’s “10-in-1” food rations, which were designed to contain enough for ten soldiers to eat one full meal. Here’s what each of the approximately 15,000 packages contained:

As was the case in many other European cities at that time, the port at Le Havre was in ruins. As CARE co-founder Lincoln Clark described the scene there in a letter to the N.Y. headquarters:

Renata Senter, who received an early CARE package as an “emaciated” 7-year-old, can relate. Born in 1939 in an area that’s now part of Poland, she fled with her mother and two younger sisters after their father, a foot soldier, had been captured and sent to a prison camp in Siberia. In January 1945, they made it to a tiny German village near the university town of Göttingen and moved into another family’s home, where she slept on a straw mattress in a room without heat. “There was nothing to be had,” she tells TIME, 70 years later.

Around the end of 1946 and the beginning of 1947, Senter remembers receiving CARE packages that contained toothbrushes, toothpaste, shoes, dresses, pencils, erasers and paper. The organization had set up a service in which American families could tell the agency what to put in the shipments, and Senter’s were sent by a family in Buffalo, N.Y. According to a 1946 letter in TIME, $15 could ship 30 lb. of food to a European family.

“Up until that point, my shoes consisted of straw sandals, which would fall apart in the rain as we would walk about a mile and a half from our home to school, and my mother had been making our clothes, skirts, out of old Nazi flags,” she says. “I remember using the white paper to study. All we had to write with was a slate and chalk. Finally, I didn’t have to erase, [so] I could excel and be good in school. Because the Americans did this, it became my dream to go to America when I grew up.”

After finishing school, Senter, now 76, moved to the U.S. in 1960, worked as an au pair, married a doctor and raised their two children while doing volunteer fundraising work for private hospitals. Now she works as a concierge in Tampa, Fla., and gives sightseeing tours to German tourists. And earlier this year, Senter, along with other early beneficiaries of CARE (which now stands for “Cooperative for Assistance and Relief Everywhere”), wrote letters of encouragement to the young adults who are at the center of what has now been called Europe’s worst migrant crisis.

Writing to Duha, a 13-year-old Syrian refugee in Jordan who dreams of becoming a doctor, “brought back all of the memories of what I went through.” Senter says she just put together a gift basket for the young girl similar to the one she received about 70 years ago that includes a dress, t-shirt, toiletries, paper and pencils. 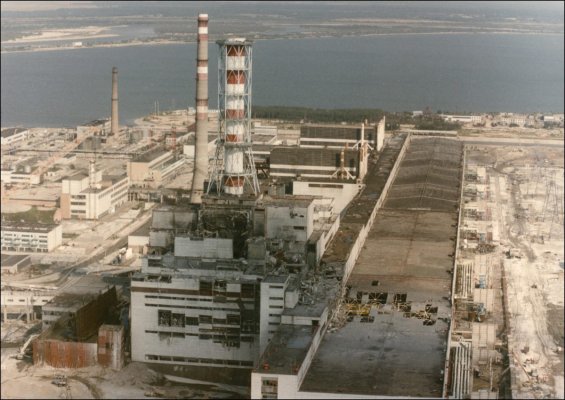 Chernobyl at 30: American Physicist Recalls Visits to Contaminated Zone
Next Up: Editor's Pick