Senator Elizabeth Warren, a Democrat from Massachusetts, questions witnesses during a Senate Special Committee on Aging hearing on Valeant Pharmaceuticals in Washington on April 27.
Andrew Harrer—Bloomberg/Getty Images
By Katie Reilly

Elizabeth Warren and Donald Trump sparred on Twitter on Friday, after the presumptive Republican nominee again attacked the Massachusetts Senator’s heritage, arguing that she is not part Native American.

In a series of Tweets on Friday, Warren called Trump a “bully who has a single play in his playbook—offensive lies thrown at anyone who calls him out” after he described her claims to Native American heritage as “phony.” Warren’s heritage became an issue during her 2012 Senate campaign against Republican incumbent Scott Brown, and Trump has criticized her for it before.

Friday’s back-and-forth is the latest in an ongoing feud between the two. Earlier this week, Warren accused Trump of building a “campaign on racism, sexism, and xenophobia.” Trump responded on Friday during his speech at a rally in Oregon, calling her a “goofus” and a “basketcase.”

The progressive senator, who many Democrats had hoped would run for president this year, has been a vocal critic of Trump throughout his campaign and is speculated to be a vice presidential contender.

“I hope corrupt Hillary Clinton chooses goofy Elizabeth Warren as her running mate,” Trump posted to Twitter on Friday. “I will defeat them both.” 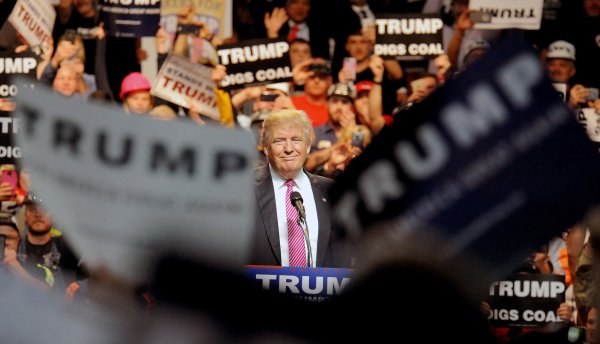