The good: Great video quality; Easy to set up; Works well without glasses
The bad: Expensive; Requires adapter to use with phone; Buttons are hard to find
Who should buy: Frequent travelers and movie lovers willing to splurge on a device for viewing entertainment privately.

At some point early in our lives, almost all of us have gotten flak for being “glued to the TV.” That expression has never been more accurate than it is with the Avegant Glyph, a headset that quite literally beams television shows and movies straight into your eyeballs.

The $700 Glyph can easily be mistaken for a chunky pair of headphones. But slide the band that rests across the top of your head down over your eyes, and the device transforms into a portable cinema. After raising more than $1.5 million on Kickstarter in 2014, Avegant started shipping the Glyph to backers earlier this year.

The Glyph looks like another virtual reality headset, like the Oculus Rift or the HTC Vive. But this eyewear is different. Instead of enveloping you in a vivid 360-degree world, the Glyph places a crisp virtual “screen” right in front of your eyes. The effect, says Avegant, is equivalent to watching a 60-inch television screen from a distance of about 10 feet. (360-degree video is coming to the Glyph by way of a promised update.)

Years of your elders telling you not to sit too closely to the TV may make you skeptical about essentially wearing a television on your face. But Avegant says the Glyph’s technology is easy on the eyes. Whereas modern televisions and smartphones use LED screens to display images, the Glyph uses mirrors to get the job done. To produce the images seen through the Glyph, the headset takes light from a low-powered LED inside the device and beams it through a set of optics. That light is then reflected off of two million tiny mirrors before it reaches the viewer’s eyes. This process of having light bounce off an object and reflect into our eyes more closely mimics the way we actually see objects in real life, Avegant says.

My experience with some low-end virtual reality headsets, like Samsung’s Gear VR, made me doubt the Glyph’s potential. But it was clear after just a few minutes of use that this experience is different. Video on the Glyph appears more clear and vibrant compared to other headsets. Meanwhile, the Glyph’s black backdrop and rich, booming audio created the feeling of sitting in my personal movie theater.

Avegant’s headset also has one major perk: You don’t have to worry about fitting it over your glasses, because you can tweak the headset’s focus precisely for each eye. A TV screen more than a few feet away from me typically looks fuzzy without my glasses, but I was able to use the Glyph easily without wearing my contacts.

You can connect the Glyph to a computer to use it as a monitor, but I don’t suspect many users will do so — when I tried, text appeared to blurry to read, even after tweaking the focus. Playing casual games was much more pleasant, depending on the genre. But the focus here is really on non-interactive media — i.e., television shows and movies.

Before you can give the Glyph a spin, you have to set it up. Avegant’s app explains the process in detail, illustrating where the vision tuning controls are located, reminding you to try nosepads in different sizes (which are included), and showing you where to plug in the HDMI cable, among other tidbits. I was watching The Mindy Project through the Glyph just a few minutes after first switching on the device.

The Glyph comes with all the cables you need for charging the eyewear and connecting it to various devices. But if you plan to use the Glyph with a phone or a tablet, you’ll have to purchase an HDMI adapter. Additionally, the Glyph must be hardwired to a device in order to work. This doesn’t feel limiting the way it does with virtual reality headsets like the Rift and Vive, which call for some movement to get the best experience. A dangling HDMI cord is much less intrusive when you’re lounging on the couch, though it might be problematic if you’re trying to use the Glyph on, say, a long flight.

One issue I encountered was that the headset’s controls were sometimes difficult to find. Avegant placed invisible buttons along the outside of the right headphone, which are punctuated with tiny dots meant to make them easier to locate. These buttons control the Glyph’s volume and adjust the screen’s brightness, but I sometimes had to tap more than once to get them to work.

The Glyph ultimately achieves what it sets out to do: Deliver an immersive entertainment experience that’s personal and portable. To put it in the simplest terms, the Glyph is a movie theater for your face. Instead of projecting images onto a screen like a traditional cinema, Glyph projects them straight to your eyes. It’s not a VR headset in the sense that Google Cardboard and the Gear VR are, but it fills a gap left open by those gadgets.

But would I pay $700 to fill that gap? I can think of a few use cases for the Glyph: Watching a movie in bed while your partner is asleep or catching up on TV shows on a long flight, for instance. But my mind starts to blank after those two suggestions. The experience doesn’t disappoint, but I don’t see enough use cases to justify the steep price. 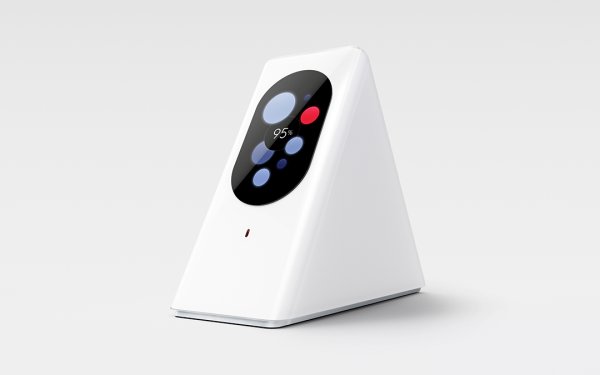 Review: This Gadget Can Replace Your Confusing Wi-Fi Router
Next Up: Editor's Pick