Barack Obama Hits Donald Trump: 'This Is Not a Reality Show'

President Obama addressed the political ascension of businessman Donald Trump, who became the presumptive Republican presidential nominee following his win in Indiana this week. He did not mince words.

“We are in serious times and this is a really serious job,” he said in response to a question at a briefing with reporters on Friday. “This is not entertainment. This is not a reality show. This is a contest for the presidency of the United States.”

Obama has emerged as one of the loudest voices questioning Donald Trump’s positions and policies as the presidential campaign plays out. From the podium of the White House Press Briefing Room on Friday, Obama called for an examination of the candidate’s record over the next several months.

“He has a long record that needs to be examined and I think it’s important for us to take seriously the statements he’s made in the past,” Obama said.

Every candidate, he added, needs to be subjected to “exacting standards” and “genuine scrutiny.” What that means, Obama said, is if a candidate has presents an answer to a problem that “is completely implausible and it would not work, that needs to be reported on. The American people need to know that.”

The president was also asked to weigh in on recent statements made by Speaker of the House of Representatives Paul Ryan, who said he was not yet ready to endorse Trump’s candidacy.”There’s no doubt that there is a debate going on in the Republican party about who they are and what they represent,” he said.

Obama, however, had less to say about the Democratic primary process where his former Secretary of State is facing a lingering challenge from Sen. Bernie Sanders of Vermont. The president said though it is likely that the two campaigns will soon have to sit down for a conversation about what will happen at the Democratic National Convention this summer.

The president’s role in the 2016 election cycle has become clearer as the process has carried on—though he hasn’t publicly taken a side on the Democratic front, he’s focused on counteracting the positions and policies introduced by Republican candidates. His efforts took a comedic turn last week at the White House Correspondent’s Dinner last week when the president joked about his poll numbers being as high as he had once gotten while in college.

The reason for his sudden likability, he joked, was Trump and Sen. Ted Cruz’s candidacies. 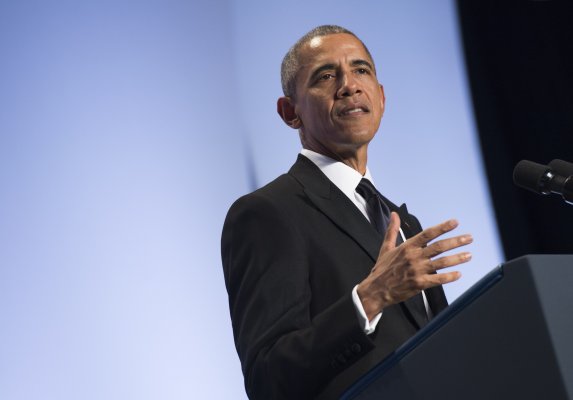 Obama Declares National Day of Prayer
Next Up: Editor's Pick