Donald Trump puts on a miner's hat while speaking during a rally on May 5, 2016 in Charleston, West Virginia.
Brendan Smialowski—AFP/Getty Images
By Tessa Berenson

Donald Trump pulled out all the stops courting coal miners in West Virginia Thursday night, but he told them to skip voting in the primary.

“Now what I want you to do is save your vote,” Trump told the crowd in Charleston, West Virginia. “You know, you don’t have to vote anymore. Save your vote for the general election, OK? Forget this one, the primary is gone.”

Even though Trump is the only remaining Republican presidential candidate, after Texas Sen. Ted Cruz and Ohio Gov. John Kasich both dropped out this week, West Virginia Republicans still do have a primary coming up on Tuesday.

In Trump’s first rally since he became the presumptive nominee, he mixed his time with reliving his primary victories and looking ahead to the general election, attacking former Secretary of State Hillary Clinton repeatedly for saying she’d put coal “out of business.”

At one point during the speech, Trump put on a hard hat and mimed a coal shoveling motion, before taking the hat off and fixing his hair. He said he has “always been fascinated by the mines,” and had said of a Trump presidency: “For those miners, get ready, because you’re going to be working your asses off.” 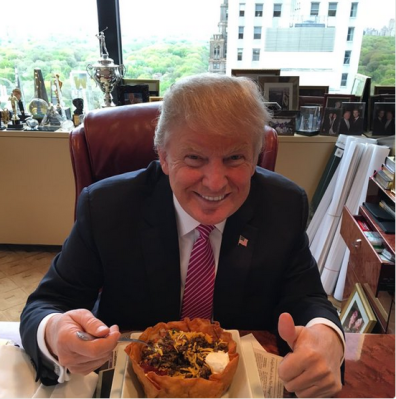