What Nazi Hunters Reveal About the Way We See History

As trials of former Nazis wend their way through the German legal system, as Eliza Gray explores in the latest issue of TIME, everyone involved knows there is only so much time left. Soon, those who stand to be held responsible for the Holocaust will all be dead, as will those who could testify against them. So, too, will the story be ending for those who made it their lives’ work to track down and exact revenge on Nazis who had fled.

That urgency was part of the reason why Andrew Nagorski knew the story of that last group had to be told now. His new book, The Nazi Hunters, brings together the tales of the individuals and organizations that have pursued Nazis across borders and over decades.

“It now has a beginning, middle and end,” Nagorski says. “Obviously these last cases, for biological reasons, more than 70 years after the war, there are very few Nazis left to prosecute. Pretty soon, this chapter of history is ending.”

Nagorski found his way to the story because he was taken by the role people could play in shaping broader history. “I’ve always been fascinated by the role of individuals in history,” he says. “We sort of look at history as this almost inevitable chain of events. What my experience as a foreign correspondent during the Cold War—particularly in places like the Soviet Union, Poland and elsewhere—taught me, is that there is nothing inevitable about the outcome of events.”

It’s also a reminder of the fact that the Nazi trials of the last 70 years were never a foregone conclusion.

For one thing, before World War II the world “genocide” didn’t even exist. Typically after a war, the victors might execute some of the losers’ leaders. There might be economic reprisals in the peace treaty. And individuals might carry out revenge on other individuals–something that took place after WWII, as well. Nagorski points to the Red Army’s treatment of civilians as it moved across Europe at the war’s end, or the way American soldiers liberating concentration camps might turn a blind eye if the prisoners decided to attack the remaining guards.

But the notion of holding trials—especially proceedings where the defendants were provided with lawyers—was something different. And, Nagorski says, “pretty soon people like [Nazi hunters Simon] Wiesenthal and [Tuviah] Friedman, who may have had the urge for vengeance, realized the real value of the trials and letting the documents and witnesses tell the story of what had happened.”

The onset of the Cold War took some of the momentum out of hunting Nazis. The U.S. and Western Europe were wary of alienating West Germany, and officials backed off from the mandate to track and prosecute. “It makes it all the more extraordinary then, the efforts of the individuals who defied this trend and try to keep fighting this battle,” Nagorski says. “People just didn’t want to deal with it at all.”

The persistence of the Nazi hunters was ultimately rewarded. As President Truman had guessed from the start, the entry of the documentation and testimony of Nazi war crimes into the historical record meant that denial was no longer a valid defense. And the precedents established by the Nazi trials would echo in the international response to subsequent atrocities.

MORE: Nazi War Criminal’s Plea for Pardon Is Made Public for First Time

“The principles are there,” Nagorski says. “No one can claim they don’t have the framework and they don’t know that if someone orders you tomorrow to execute your neighbors because they have different color eyes or the wrong religion or the wrong culture, that you don’t know that this is wrong. Whether people are acting on that and actually changing their behavior, that’s another story.”

Read TIME’s 1945 coverage of the Nuremberg Trials, here in the TIME Vault: The Fallen Eagles 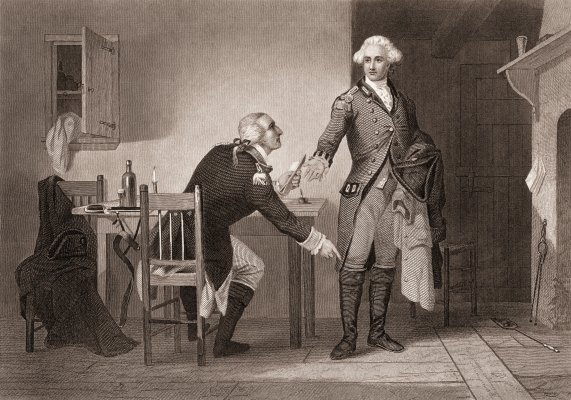 How Benedict Arnold Actually Helped Win the Revolutionary War for America
Next Up: Editor's Pick