The Architect Who Changed the Thai Silk Industry and Then Disappeared

In this undated file photo, Jim Thompson smiles shortly before he disappeared.
AP
By Daisy Alioto

Less than a decade later, the news out of Asia regarding Jim Thompson would be much different. The media, including TIME, reported on Thompson’s mysterious disappearance while on a walk in the Malaysian highlands. Even today, nearly a half-century later, what happened to Thompson remains a mystery. Because of this event, and the conspiracy theories surrounding it, Thompson’s popular memory has become a salacious one.

However, Thompson’s true legacy is the quintessential story of personal reinvention. He is proof that it is never too late to start a new chapter.

James H. W. Thompson was born in 1906. He grew up in Delaware and attended Princeton, taking architecture courses at the University of Pennsylvania before practicing architecture in New York under fellow Princetonian Arthur Cort Holden. Thompson networked with his parents’ society friends–offering up his expertise for home design–and indulged in hobbies like hunting and breeding bantams. On the surface, he was living a charmed life, but his letters tell a slightly more frustrating story.

Most significantly, in three separate attempts in the late 1930s, he failed to pass his qualifying exam to become a licensed architect. This led to a demeaning exchange with the board in which he asked to have his results reconsidered and was refused. However, his scores would soon be irrelevant: in 1940, he enlisted in the Delaware National Guard.

Whether he knew it or not, Thompson was already well on his way toward a life of a very different sort. Thompson eventually landed a position with the Office of Strategic Services (OSS), the predecessor to the CIA, which sent him to Thailand just as World War II was ending. Keen to stay in Bangkok even after his discharge, his sights landed serendipitously on the untapped potential of the Thai silk industry.

Despite silk resources of its own, Thailand was importing the fabric. “It disturbed me that production of this wonderful material had stopped,” Thompson told TIME. Perhaps to emphasize Thompson’s unlikely ascendance, TIME wrote that he started with a $700 investment in the late 1940s and by 1957 was making $650,000 in annual silk sales.

However, an account by Thompson friend and biographer William Warren says that the company had raised $25,000 from shareholders when it was incorporated, although Thompson’s personal investment was much smaller.

Secondly, he supplied the fabrics for Rodgers and Hammerstein’s The King and I when it ran on Broadway, a show that takes place in present day Thailand.

MORE: Read TIME’s Original Review of The King and I

Thompson was among the rare group of middle-aged people who not only “dream of turning their back on what they have achieved (or failed to achieve) and starting out on an entirely new path,” but actually go through with it, wrote Warren in his 2007 book Jim Thompson: The Unsolved Mystery.

The same Thompson who once was accused of attempting to fool Delaware society into believing he was a licensed architect now charmed European ladies in Bangkok by recommending the colorful silks that most offset their eyes. He was a world away from his life in America and its disappointments.

But he had not left design: In 1959, Thompson completed a house that would become one of Bangkok’s premier tourist attractions. He combined six different styles of Thai houses with his own contemporary vision. The result was a unique complex of peaked villas surrounded by lush greenery. Unsurprisingly, the home was located in the heart of the city and along the pulse of Thompson’s new world: on the banks of the khlong (canal) across which Bangkok’s silk weavers lived and worked.

The Jim Thompson house quickly became a social hub for friends old and new. More importantly, Thompson filled it with a collection of Thai art and antiques that was unprecedented in scope. He saw these acquisitions as a gift to his new country and planned to leave them to the royally sanctioned Siam Society.

In Bangkok, Thompson was the center of his own domain. But the real test of his personal transformation was how he handled a blow to his pride, similar to the ones that turned him away from his life in New York.

MORE: A Brief History of Coups in Thailand

In 1962, Thompson was accused of having five stolen Buddha heads in his possession. According to Warren, Thompson swore in a letter to the director general of Thailand’s Fine Arts Department that he was amassing a collection that would benefit the nation, “not making a collection for financial advantages or selfish purposes.” However, after a visit from the police, Thompson was obliged to bring the contested artwork to Thailand’s National Museum.

Chastened, and pulling the only cards he had left, he revoked the will that left his house and the art collection it contained to the Siam Society and withdrew from his place on its council. His home is now a museum with its own foundation. In fact, Thompson spent his fortune adding to that collection. When he left for his ill-fated trip to Malaysia, Warren explains, he only had $50 in his bank account. The salary he had earned from the silk company went straight to his art until the end of his days.

TIME’s coverage of Thompson’s disappearance describes a massive manhunt involving helicopters, dogs and the help of local aborigines. In the beginning, his friends and loved ones expected him to walk right back out of the jungle. As time went on, however, theories of his kidnapping or voluntary disappearance abounded. It didn’t help that multiple professional ‘clairvoyants’ claimed to know his whereabouts.

It’s unfortunate that the circumstances surrounding Thompson’s presumed disappearance came to overshadow the details of his life and his inspiring story of personal reinvention.

If Thompson’s story is to be told in terms of a walk, it should be along the path less traveled. 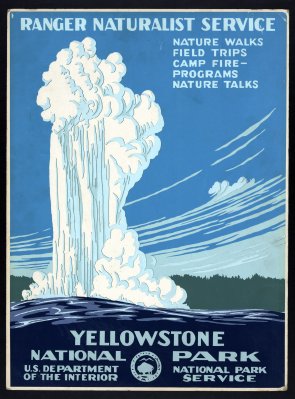 The Story Behind Those Gorgeous National Parks Posters From the 1930s
Next Up: Editor's Pick