Michael Kinsley the journalist and former Crossfire co-host sizes up the boomer legacy, extols later-in-life marriage and gets real about the big exit
George Baier IV
By Belinda Luscombe

Old Age: A Beginner’s Guide is a funny book about getting old and dying, and having Parkinson’s. Of all subjects, why that?

Well, the reason is obvious. Because I have Parkinson’s. And it occurred to me that what I was experiencing was something that all boomers are going to go through eventually, and eventually is earlier for some than for others.

One of the themes of your book is that boomers are very competitive. How can death be a contest–doesn’t everybody get the prize?

Whose death have you admired?

My mother died in the modern American style, and it was awful–years of unnecessary procedures. My dad died too young, but he was on the golf course and he just collapsed. That’s pretty good.

I wouldn’t take up golf just so it could kill me.

You were diagnosed with Parkinson’s at 42, but you hid it until you were 50. Did people treat you differently?

Yes. As soon as people find out, they treat you differently–better, in a way. Except at a dinner party, a woman offered to cut up my meat for me.

One thing the revelation cost you was being editor of the New Yorker. Are you sore about that?

When I think rationally about it, I think it turned out very well. I met my wife while working for Slate. And [current New Yorker editor] David Remnick’s done a good job. But I don’t look at it rationally some of the time. It would have been very nice to be editor of the New Yorker. I guess that would be my biggest regret, although if that’s my biggest regret, I’ve done pretty well.

Should everybody be thinking about Alzheimer’s?

There are lots of different kinds of dementia. Alzheimer’s is by far the biggest. You should think about it simply because the odds are not against you [getting it]. The vast majority of boomers have not really focused on cognition. Or they have in the case of their parents, but it hasn’t really sunk in that we are our parents now.

What will be the legacy of the boomers?

Well, my suggestion for our legacy was that we pay off the national debt, but nobody is taking me up on it. I would say boomers are leaving a cultural legacy that’s generally good. Instead of suburban houses on cul-de-sacs, we’re reviving the cities. Race relations I think are getting better, in fits and starts. And coffee’s better.

Your wife Patty Stonesifer was the founding CEO of the Gates Foundation. Got any tips for marrying cool women?

Patience. I was 51 years old before we got together. And good luck. Being married is certainly something I should have done earlier, although that’s difficult, because as my wife points out, if I got married earlier, it wouldn’t have been to her.

How are you voting?

I’m almost certainly going to vote for Hillary, but without any special enthusiasm.

May I ask you a few questions about your own death?

I’d like to hear anything you know about it.

I spend a lot of time thinking unproductively about things I want to get done, and they’re mostly pleasure things, like visiting some fun tropical spot. But I have a list: I wanted to write this book. And I’d like to see our country’s economy untangled, although there’s not a lot I can do about that. And by untangled, I mean income distribution as well as prosperity. I’d like to be editor of TIME–I think.

Do you wish you had kids?

I really lucked out there. I got married the day Sandy, Patty’s only daughter, graduated from high school. And their dog died. I thought both of those were good omens.

Why is the dog dying a good omen?

Because there was a place in her heart that was suddenly vacant.

So you’re the dog? 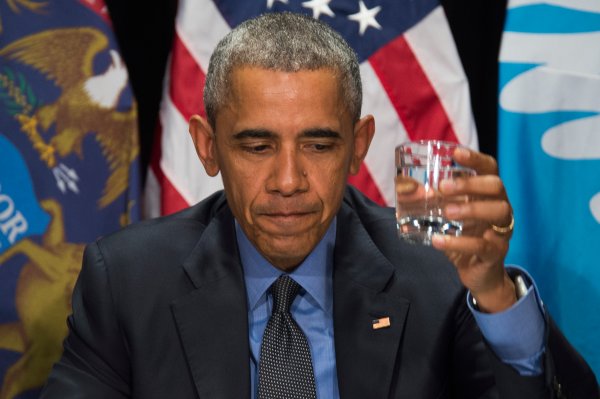 Read President Obama’s Speech in Flint on Federal Response
Next Up: Editor's Pick