Now that Ted Cruz and John Kasich have dropped out of the Republican presidential race, Donald Trump is all but set to become the GOP nominee when the party gathers for its convention this July in Cleveland.

That means you’ll be seeing a lot more of his family—on the campaign trail and on TV. He’s got a big family, with his wife Melania, a former supermodel, and his daughter Ivanka, an accomplished businesswoman, only the most prominent among them.

Here’s a guide to who’s who in Donald Trump’s clan.

Trump’s third wife, born Melanija Knauss, is a Slovenian model and mother of his youngest son, Barron. She met Trump in 1998 at the Kit Kat Club in New York, but they broke up when Trump briefly considered running for president in 2000. The pair got back together, and he proposed at the Met’s Costume Institute Gala in 2004. According to a New Yorker profile of Melania, she didn’t ask Trump to learn any Slovenian. She has a jewelry line and a skincare line, and has kept a relatively low profile during the campaign so far. “I give him my opinions, and sometimes he takes them in, and sometimes he does not. Do I agree with him all the time? No. I think it is good for a healthy relationship. I am not a ‘yes’ person,” she told Harper’s Bazaar. “I don’t want to change him. And he doesn’t want to change me.”

Donald Trump’s oldest son with first wife Ivana Trump is a businessman and an executive vice president at the Trump Organization (along with his brother Eric and sister Ivanka), which means he helps run the Trump Organization while his dad is running for President. Trump Jr. says he and his siblings avoided becoming fodder for gossip blogs by devoting lots of time to working for their father’s business. Trump Jr. says he started by working on the docks in Atlantic City, telling Forbes: “I’m pretty certain that I’m the only son of a billionaire who can drive a D10 Caterpillar better than I can drive a golf cart.” He and his wife Vanessa have five children.

Donald’s poised and accomplished daughter with Ivana Trump has frequently accompanied him on the campaign trail or acted as a surrogate for her father. She is a former model who now serves as executive vice president of development and acquisitions at the Trump Organization and runs her own successful lifestyle brand that sells shoes, handbags and fragrance, as well as the Ivanka Trump Fine Jewelry Collection. On top of all that, she recently gave birth to her third child, Theo, with husband Jared Kushner. Ivanka Trump converted to Judaism in 2009 when she married Kushner, and she says she regularly cooks Shabbat dinner for their family.

Ivanka Trump’s husband is a real estate mogul in his own right. The CEO of New Jersey real estate empire Kushner Companies and publisher of the New York Observer is also the son of Charles Kushner, a real estate developer who spent time in prison for hiring a prostitute to entrap his brother-in-law, who was cooperating with federal authorities in an investigation against him. Jared Kushner grew up in an Orthodox family in Northern New Jersey before getting his undergraduate degree at Harvard and a joint business and law degree at NYU.

Donald Trump’s third child with Ivana is also, like his siblings, an executive vice president at the Trump Organization, and owns Trump Winery. He has a degree from Georgetown and married CBS producer Lara Yunasaka in 2014. This year, the youngest son from Trump’s first marriage attended the White House Correspondents’ Dinner.

Donald Trump’s only child with second wife Marla Maples is 22 and about to graduate from the University of Pennsylvania. She mostly grew up with her mother in California, and saw her father only a few times a year—Maples has said she raised Tiffany mostly as a single mom. “Her daddy is a good provider with education and such, but as far as time, it was just me,” Maples told People magazine. Tiffany was reportedly named after the store Tiffany’s, and she’s been called one of the “Rich Kids of Instagram.”

Donald Trump’s older sister Maryanne seems to have distanced herself as far as she could from the glitzy Trump empire: She was a federal judge for the U.S. Court of Appeals for the Third Circuit, more likely to be seen in judicial robes than fancy gowns. Appointed a federal judge by Ronald Reagan in 1983, she was put on the Court of Appeals by Bill Clinton in 1999. In 2006, she testified in support of Justice Samuel Alito’s nomination to the Supreme Court. Ted Cruz once called her a “radial pro-abortion extremist” because she struck down a New Jersey partial-birth abortion ban she deemed too broad. Trump reportedly used his connections to lobby for her to get appointed to the bench.

Donald Trump’s youngest son with Melania is 10 years old and lives in the family penthouse with his mother in New York. Between his mom, a model, and his sister Ivanka, a fashion designer, Barron is fashion-forward for an elementary school kid: Melania has said that he’s “not a sweatpants kid,” but likes “to dress up in a tie sometimes like Daddy.” He’s frequently absent from the campaign trail, since he’s busy with his homework for his private school in New York City. 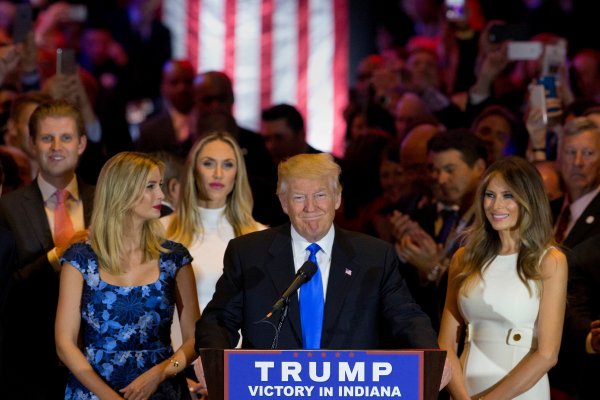 Exclusive: What Trump Said When Kasich Dropped Out
Next Up: Editor's Pick