Donald Trump won a resounding victory in Indiana’s Republican Primary on Tuesday, all-but winning his party’s presidential nomination and closing off the path to the nomination for Sen. Ted Cruz, his one serious remaining rival.

The results in Indiana were a decisive milestone in the Republican primary, ending what Texas Sen. Cruz’s last hope to force the race into a contested convention.

Shortly after Trump’s victory in Indiana, Republican Party chairman Reince Priebus called him the “presumptive GOP nominee,” effectively handing the party to a man widely loathed within its own ranks.

Trump, who stormed over a deep field of Republican candidates with a potent mix of ad hominem attacks, bluster and outsider flair, is one of the least popular men ever to be the presumptive nominee of a major political party. He has surprised his party at every turn, beating back well-funded rivals and capturing the imagination of a restive Republican base.

Vermont Sen. Bernie Sanders won the Democratic primary in Indiana, the Associated Press projected shortly after 9 p.m. ET, edging out Hillary Clinton by a small margin. The delegates will be split in the state, however, and the result is unlikely to shake the race.

Now Trump is preparing for a general election, likely against Clinton.

Cruz announced he was dropping out of the Republican primary shortly after the results were called, a shocking blow to a GOP establishment that hoped to prevent Trump from winning the nomination.

“We left it all on the field in Indiana. We gave it everything we’ve got but the voters chose another path,” Cruz said. “So with a heavy heart but with boundless optimism for the long-term future of our nation, we are suspending our campaign.”

With Trump’s path toward the Republican nomination cleared, perhaps the most remarkable primary in recent history is winding to a close.

After Trump claimed a sweep of major victories in five Atlantic states from Rhode Island to Maryland last week and in New York the week before, he was in a strong position to claim the Republican nomination by the last primary in June. The real estate mogul’s big win in Indiana gave Cruz little chance to win the nomination.

The Republican primary was deeply bitter in recent weeks, with the candidates trading charges of desperation, dishonesty, and even questioning each other’s basic morality. Cruz spent his final day before polls closed in the state making an urgent push to block Trump from winning a victory that would virtually seal up the nomination for the billionaire businessman.

As he campaigned in the Hoosier State this week, Cruz engaged with pro-Trump protesters, touted his support of Second Amendment rights, and worked to sway evangelicals and Christian conservatives. At a campaign stop in Evansville, Ind., on Tuesday, Cruz criticized Trump for statements he’s made about women and his weakness with female voters, describing him as “terrified of strong women.”

Earlier on Tuesday, Trump fired back at comments by Cruz’s father, Rafael, who called on evangelicals and constitutionalists to vote for his son and warned that “the alternative” candidate could cause “the destruction of America.

Trump also baselessly accused Rafael Cruz of being affiliated with Lee Harvey Oswald and involved in the assassination of President John F. Kennedy.

“Let’s be clear: this is nuts. This is not a reasonable position. … This man is a pathological liar,” Cruz said from Evansville, rejecting the criticism of his father. “The man is utterly immoral.”

Sanders’ victory in the Indiana primary will likely give him a bump in fundraising, though the nomination is increasingly out of his reach with Clinton enjoying a sizable delegate lead. The state’s open primary stood to help both Trump and Sanders, who have attracted independent voters throughout the campaign.

Clinton’s allies were already beginning to call on Sanders to drop out of the race Tuesday night to allow the former Secretary of State to concentrate on the general election. 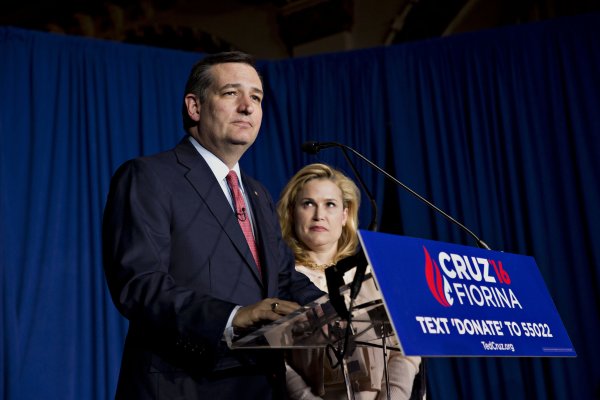 Why Ted Cruz's Big Gamble Failed
Next Up: Editor's Pick