When Alf Dubs was six years old, his mother put him on a train in Prague knowing she might never see him again. The year was 1939, and Czechoslovakia was already in the clutches of Nazi Germany as World War II neared. For many parents, the only hope was the Kindertransport — a rescue mission that saved thousands of predominately Jewish children from Nazi death camps in eastern Europe.

Dubs, today a Labour Party peer in the House of Lords, remembers being confused and frightened as the train pulled out: “I knew something significant was going on but did not know what it was. All I know is 24 hours later, when we crossed into Holland, the older ones cheered because they knew they were out of reach from the Germans.”

Almost eight decades on, Dubs is trying to create a Kinderstransport for a new generation: A program to find homes for some 90,000 unaccompanied migrant children stranded in eastern Europe after the largest migration since WWII. And this week, he won his biggest victory yet. On Thursday, British Prime Minister David Cameron signaled he would not fight an amendment by Dubs to the U.K’s Immigration Bill, requiring the country to take in a certain number of unaccompanied minors from Europe.

Dubs’ first amendment to the Immigration Bill — introduced as Europe continues to grapple with a huge influx of migrants from the Middle East and Africa — called for 3,000 unaccompanied youngsters from camps within Europe to be brought to England. It was narrowly rejected by Members of Parliament (MPs) on April 25, only to be held up in the House of Lords, the unelected upper chamber of Parliament. Dubs revised his amendment to cut specific numbers and, after a surge in public support and a growing rebellion by MPs in the ruling Conservative Party, Cameron conceded that he would “see what more we can do.”

Dubs, 83, says he was driven to amend the bill out of concern that the U.K. was doing so little for Europe’s migrants, compared to countries like Sweden, which has more refugees per capita than any country in Europe, and Germany, which took in over a million migrants in 2015. “It comes to something, and here I say as a refugee from the Nazis, when Germany becomes the conscience of Europe,” Dubs says. The Kindertransport of WWII was a U.K. government-backed initiative, he notes, and the only program at the time to save vulnerable children from war. “Even the Americans refused, they said they could do nothing.”

After thousands of Jews were killed in Germany and Austria in the Kristallnacht pogrom of 1938, aid agencies in Britain decided to act. From December that year till war broke out in Sep. 1939, as many as 10,000 children from Germany, Austria, Czechoslovakia and Poland were transported by train, ship or plane to the U.K, where they were housed in foster homes, hostels and camps.

Unlike many of his fellow Kindertransport passengers, Dubs was quickly reunited with his parents after arriving in London. His father had fled Prague when the Nazis occupied the city in March 1939, and while his mother was initially refused permission to leave she soon joined them. “Some of [the Kindertransport passengers] managed to find their parents years later, but I was certainly luckier than most,” he says.

He became interested in politics as a schoolboy, before going on to serve as a Labour Party MP in southwest London and being made a life peer in 1992. “I supposed what came to mind is evil men can do what they did in politics and maybe politics can also be used to reverse the process and do things for the better,” he says. In office and out, he campaigned for migrants and asylum seekers, serving for a time as director of the non-profit Refugee Council.

Dubs acknowledges that his experience of life as a child refugee gives his quest a personal angle, but says vulnerable unaccompanied minors should be an issue of concern to all no matter their background. “It is pretty alarming that young people are sleeping rough in a modern sophisticated continent, and some have disappeared with no one to protect them or look after them” he says. According to the intelligence agency Europol, 10,000 unaccompanied migrant children who entered Europe in the last two years have all but vanished. “They are liable to be trafficked by people, they are liable to be forced into some form of slavery or prostitution,” he says.

After Cameron’s statement on May 4, Downing Street said that unaccompanied asylum-seeking children who registered in Greece, Italy and France prior to the EU-Turkey migration agreement on March 20 will be “eligible for resettlement” — though a specific number has yet to be announced. The total will be in addition to Cameron’s pledge to take in 20,000 refugees by 2020 and a further 3,000 “vulnerable children and family members” from the Middle East and North Africa.

Delighted at the prospect that his amendment looks set to pass in a May 9 vote, Dubs says the next step is for authorities to seek foster families willing to provide children with stable homes. “The government has accepted the principle [of the amendment] and we have to push them on how they implement it.” For now at least, the Kindertransport is back on track. 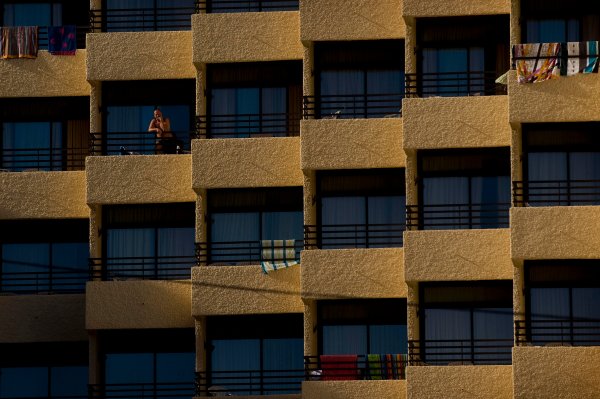 Dream Retirement of Millions of Brits Threatened by Vote to Leave E.U.
Next Up: Editor's Pick