Senator Ted Cruz walked straight toward a group of pro-Trump protesters on Monday in Marion, Ind., and made a last attempt to win them over.

“I have spent 20 years fighting to defend the Second Amendment,” Cruz said on a street curb outside his rally, “while Donald Trump is a New York liberal who will take away your Second Amendment rights. This man is lying to you and he’s taking advantage of you.”

After eight minutes of sparring, however, the protesters were not buying it.

Indiana — the state that was meant to rescue Cruz from the 2016 election recycling bin — is not likely to help the Texas Senator on Tuesday. Despite his best attempts to parry accusations from Trump about his citizenship and his honesty, Cruz is as far from winning the nomination as ever. He has just 565 delegates to Trump’s 996, according to the Associated Press count.

Cruz has made Indiana and its 57 delegates something of a last stand: the state’s large population of evangelicals and Christian conservatives should have made it a comeback state for Cruz after a series of bad losses in the Northeast. The Tea Party wave of 2010 and afterward helped usher in seven of the eight members in the state’s Republican delegation.

“This entire political process has conspired to put the state of Indiana in the position to stand up and speak the voice of sanity,” Cruz said on Sunday. “It is a fundamental choice: Do we get behind a campaign that is based on yelling and screaming and cursing and insults, or do we unify behind a positive, optimistic, forward-looking, conservative campaign based on real solution to the problems we are facing?”

And yet, Cruz lags behind Trump in Indiana by double digits in some polls, including one released Sunday by NBC News/Wall Street Journal/Marist that showed Trump with 49% of the vote to Cruz’s 34% — a 15-point margin. He appears likely to lose tomorrow’s primary, and with it, much of the remaining faith in his party that he has a viable chance of stopping Trump.

On the Democratic side, Vermont Senator Bernie Sanders and former Secretary of State Hillary Clinton are in a closer contest, though Clinton is slightly outpacing her opponent. The NBC/Wall Street Journal/Marist poll found Clinton ahead by 4 points, 50% to 46%. But with Clinton far outstripping Sanders in the overall delegate count, it is unlikely a victory by the Vermont Senator in Indiana would sway the race.

Indiana is an open primary, which means that Independents can vote in either primary. That benefits both Trump and Sanders, who draw on voters outside of the traditional base of their respective parties.

Cruz has tried every tactic in the rulebook to save his candidacy, and even invented some of his own. He formed an agreement with Ohio Governor John Kasich, who did not compete in Indiana in order to give Cruz a clear shot.

He made the remarkable move of choosing Carly Fiorina, the former Hewlett-Packard CEO, as his running mate — although the Republican convention is still months away — in an effort to galvanize GOP support. And he has campaigned constantly in Indiana over the past week to boost his chances against Trump.

The state’s governor, Mike Pence, has endorsed Cruz. But even Trump seemed to win that argument.

“I particularly want to commend Donald Trump,” Pence said last week, who “has taken a strong stand for Hoosier jobs.”

Indiana will be less important of a turning point for the Democrats. The outcome will either cement Clinton’s more than 300 delegate lead over Sanders, or give the Vermont Senator a momentary spark of energy as his campaign slows into the convention.

Sanders has said he still is running to win the nomination, and believes he can sway superdelegates to support his candidacy at the Democratic convention if he can prove he is more likely to win in a general election.

Clinton “will need superdelegates to take her over the top at the convention in Philadelphia,” Sanders said at a press conference on Sunday. “In other words, it will be a contested convention.”

In what was perhaps a sign of the shifting winds in the Democratic race, Clinton for the first time in April raised more than Sanders did, bringing in $26.4 million to Sanders’ $25.8 million. Sanders’ fundraising was down some 40% compared with March.

Sanders spend all of Monday campaigning in Indiana, holding three events across the state. Meanwhile, Clinton was making a swing through Appalachian coal country, in Ohio, Kentucky and West Virginia.

It marked Clinton’s first recent visit to Ohio as she prepares for a general election.

Expecting a victory against Cruz tomorrow, Trump would like to do the same.

“I would like to get on to Hillary,” Trump told reporters on Monday. 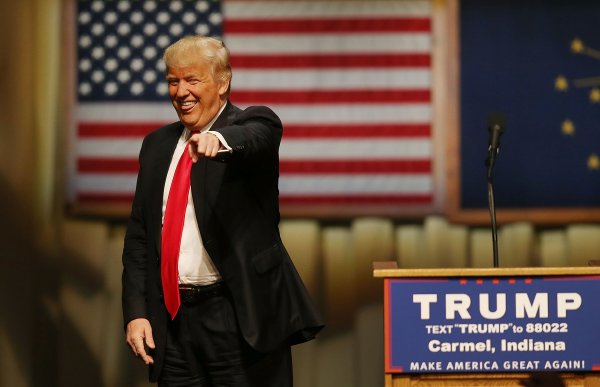 Donald Trump Looks Ahead to a November Race Against Hillary Clinton
Next Up: Editor's Pick