There's More to That Hodor Flashback on Game of Thrones

While it may be difficult to remember that anything other than Jon Snow’s long-awaited resurrection happened in Sunday night’s episode of Game of Thrones, there were several other significant scenes. One of those moments involved the return of Bran Stark and the Three-Eyed Raven, who viewers were reintroduced to during a journey into the past to see a young Ned, Benjen and Lyanna Stark.

It was also during this flashback that Bran caught a glimpse of Hodor as he had never seen him before — speaking words other than “Hodor.” The gentle giant was revealed to have once been a stable boy at Winterfell who went by the name Wyllis. Although the Song of Ice and Fire series gives Hodor the name Walder instead, this discrepancy seems less important than the reveal itself.

Of course, this scene begs a few questions. When and why did Wyllis lose his ability to form full sentences? And where did the word “Hodor” come from? Well, some fans think they’ve figured it out.

One popular theory posits that Hodor’s fate is directly intertwined with that of the White Walkers. In George R.R. Martin’s A Storm of Swords, Melisandre tells Jon that the Great Other — the Lord of Light’s evil counterpart — has a name that should not be spoken aloud. “His name may not be spoken. He is the God of Night and Terror, Jon Snow, and these shapes in the snow are his creatures,” she says.

This has led some to believe that Hodor was turned into an agent of the Great Other (whose unspoken name is Hodor) and sent to bring Bran north of the Wall for some yet-to-be-revealed purpose. Others think that he is the Great Other himself in disguise. One detail that seems to support these arguments is that when Bran wargs into the body of an animal, he can sense their thoughts at the back of his mind, but when he wargs into Hodor, he cannot. In A Dance with Dragons, Martin writes, “Hodor would curl up and hide whenever Bran reached out for him. His hiding place was somewhere deep within him, a pit where not even Bran could touch him.”

In any case, with this first flashback scene out of the way, hopefully more information about Hodor’s mysterious past will soon follow. 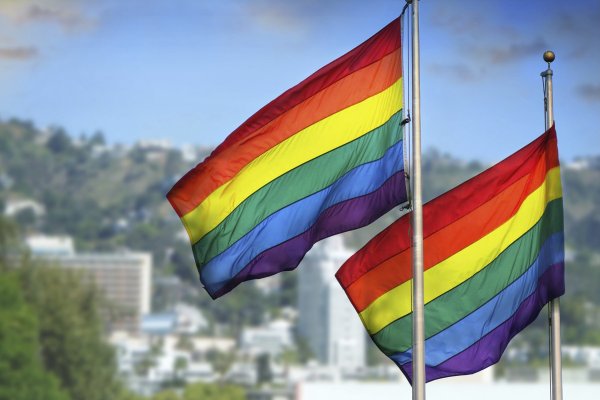 This Test Measures How Hollywood Treats LGBT Characters
Next Up: Editor's Pick