The families of renowned climbers Alex Lowe and David Bridges received some closure last week when the remains of both men were finally found 16 years after they were killed by a Himalayan avalanche, according to a statement on the Alex Lowe Charitable Foundation’s website.

Two hikers found Lowe and Bridges’ bodies during their ascent of Shishapangma, the world’s 14th tallest mountain, which is located in Tibet.

“They had come across the remains of two climbers still encased in blue ice but beginning to emerge from the glacier,” the statement said. “[Hiker David] Goettler described the clothing and packs of the climbers to [Conrad Anker] who concluded that the two were undoubtedly David Bridges and Alex Lowe.”

Lowe, then 40, and his cameraman Bridges, 29, were climbing the mountain in October 1999 when they were buried by a massive avalanche. Conrad Anker – who is now married to Lowe’s widow Jennifer Lowe-Anker – was also with the men, but survived with minor injuries. The remaining members of the expedition team searched for the men for two days, according to Outside magazine.

Lowe-Anker, who shared three children with Lowe, said she was surprised by “how quickly” her late husband’s body was found. “I thought it might not be in my lifetime,” she told Outside.

While Anker and Lowe-Anker have not yet seen photos of the bodies, and a conclusive test hasn’t been conducted, he said, “we’re pretty sure it’s them.”

“They were close to each other. Blue and red North Face backpacks. Yellow Koflach boots. It was all that gear from that time period,” Anker explained. “They were pretty much the only two climbers who were there.”

The family, who now operate the Alex Lowe Charitable Foundation, plans to recover the bodies this summer, and will likely hold a ceremony in nearby town Nyalam, Tibet.

“It’s never something you look forward to,” Anker-Lowe told Outside. “To see the body of somebody you loved and cared about. But there is a sense that we can put him to rest, and he’s not just disappeared now.”

“Alex and David vanished, were captured and frozen in time. Sixteen years of life has been lived and now they are found. We are thankful,” Lowe-Anker said in the statement. 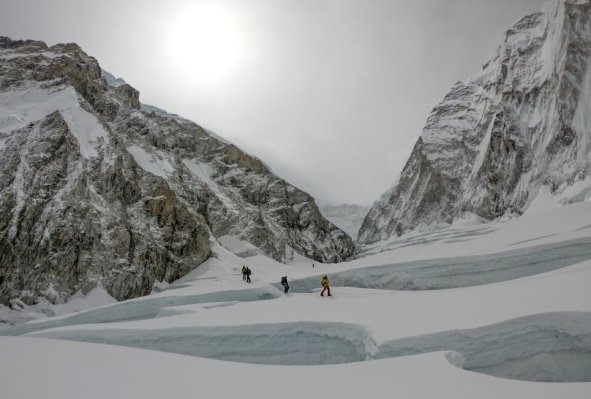 Greed, Weather and Inexperience: See How Mount Everest's Deadly Season Compares to Past Years
Next Up: Editor's Pick